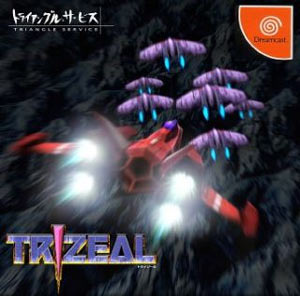 The Dreamcast had a long string of 2D shooters that continued long after the console left the retail scence in most countries.

Trizeal was developed by Triangle Service, a small Japanese developer, and was ported to the Dreamcast in 2005 from the NAOMI arcade platform, making it one of the officially licensed games to be released for the system after it went out of production.

The Dreamcast version offers a score attack mode, a sound test mode and new stages that weren’t in the arcade version. A PlayStation 2 version was released in 2006, and there is also a Microsoft Windows version.

Trizeal isn’t remembered as a high-profile shooter because it didn’t have a catchy gimmick like most modern shooters. Instead it focuses on producing a clean and refreshing shooting experience that is appreciated for old-school gamers that just want to have a quick blow-stuff-up session.

Review Tidbits:
“Trizeal doesn’t rely on any particular gaming mechanic to differentiate it from any other straightforward shooters, but in a way, this is a refreshing change from the last couple of years of shooters with a “hook”. This leaves play unencumbered, a pure “get on and shoot stuff and dodge bullets” feeling. Overall it is a well-produced package, a raw shoot-’em-up, no flash menus or intros but very enjoyable to play. Whether looking for a quick ten-minute blast or three-hour session, Trizeal will leave most smiling and satisfied.”
NTSC-uk 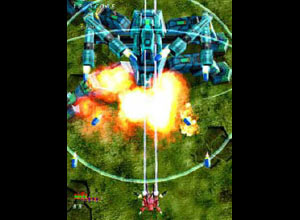 “Trizeal delivers a steady stream of enemies to shoot your way through. Bonuses can be “chained” together in combos to build up your weaponry, so you won’t want to share too many of them with your friend in two-player mode. In addition to the game’s normal arcade mode (which only grants players a limited number of continues), Trizeal also contains “score attack” modes. High scores can be submitted to the web via the game’s built in password system. If you manage to get your name on Triangle’s website, I’ll send you a thousand meseta. That’s not a bad deal, considering I’ll send you a hundred meseta, simply for sending me a private message and telling me you read this review. That’s how generous I am.”
Digital Press Online

“Let’s see how the PS2 version holds up: Now called “Shooting Love”, the PS2 version of Trizeal is basically a direct port of the DC version. The only noticable difference in the main game? More slowdown, and lots of it. After playing on my Playstation, I busted out the DC version to confirm it, and sure enough, my initial reaction was right….slowdown abounds. Where the DC only hit the breaks for boss explosions and tons of bullets on the screen, the ps2 slows in many more places, the most obvious being the battleship boss of level three. Sure slowdown helps a bit in shmups, but I feel it gets annoying jumping framerates several times a level and having to constantly adjust. ”
ShootTheCore