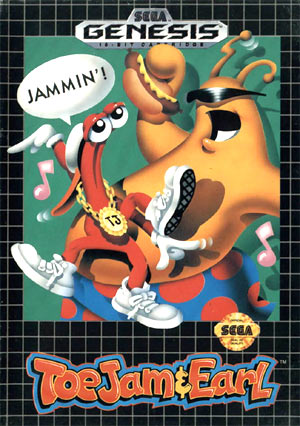 The Sega Genesis had a heaping spoonful of quirky yet delightful titles and one of the first Sega titles to set this standard was Toe Jam & Earl.

This cult favorite broke the monotony that the glut of side-scrolling platformers brought. This uniqueness is the primary reason that fans were so dismayed by the format change in the game’s sequel (even though it was still a good game).

Screenshots of Toe Jam and Earl don’t do the game justice at all, so take a look at this YouTube video and the reviews below to see what makes this gem stand out.

Review Tidbits:
“This tale sets up one of the finest console games ever produced, Greg Johnson and Mark Voorsanger’s ToeJam & Earl for the Sega Genesis. Although I consider it a roguelike (which is why we’re covering it here), it’s entertaining for other reasons than just that.

It has an awesome sense of humor, music fully worthy of the game’s premise, wildly imaginative enemies, and terrific graphics considering the platform. And it is the best two-player co-operative game that exists anywhere. It’s slated to be one of the early releases for Wii’s Virtual Console feature, and I cannot recommend it highly enough.”
GameSetWatch

“Graphically, what can one say about a game that’s fourteen years old. The animations are a little jumpy, and the textures on the ground are somewhat repetitive. But the gameplay, the wonderful coop gameplay, is still as fresh as any game of this generation…The music, one of my most memorable aspects of the game, still is amazing. The soundtrack by Baker is truly one for the ages, not to be simply reproduced or imitated in any game, by anyone. It only takes a moment to know the soundtrack from ToeJam and Earl.”
GamesFirst 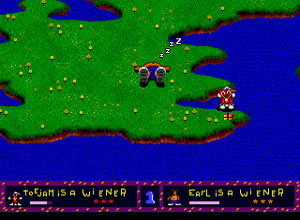 “The real high point of the game: the two-player option. Playing with one person is OK, but the entire game takes on a new perspective when a friend plays along. In many areas teamwork pays off greatly, and if you want to play competetively, try going your separate ways. The screen splits when the team breaks up, and joins together when they are near. The “random game” option keeps this cart from ever getting repetitious, because the contents of presents, their location, the location of the ship pieces, and the geography change with every game. I can’t see myself ever getting really bored with this cart. It’s unique, fun-to play (especially with a friend), and has one of the best endings I’ve ever seen in a game.”
DigitPress

” The replay value for ToeJam & Earl is very high because of the random worlds. You will never encounter the same world twice, so it’s a different game every time. This game is undeniably fun with two players and can be played for days and beaten countless times, all the while leaving you with the urge to play it some more. I think the random feature of this game is a great idea because it makes the game timeless and allows you to take it off the shelf and play without any patterns or memorization. While random levels may not have worked in other titles, this game is perfect for it.”
Sega-16 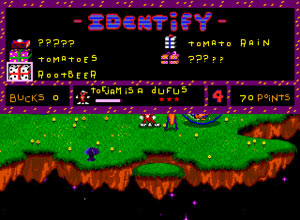 “Back in the day (early 90’s) and even today, there was no other game that played like, sounded like, or looked like Toe Jam & Earl. And there still isn’t. This is mostly due to the game’s personality. Just wait until you see Toe Jam shake his booty and look from side to side when he gets too close to one of those dancing Hawaiian girls. Let Earl stand around too long and he’ll just lie down and fall asleep on you. Eating a burger, fries, etc., will make Toe Jam and Earl burp or say something such as ”Yummy.” Do well enough in the game, and your energy bar will grow. At the same time, your honorable tag will change from something such as ”Toe Jam is a wiener” to ”Toe Jam is a dude”.”
Retro @ GameFAQs

So, Wii probably got itself a rogue like game? One can only hope…

Reply
Pingback: The Past, Present, and Future of Sega’s Best Franchises - racketboy.com

This game is probably the most unique game of all times. Every enemy is completely different and will harm you in different ways. Likewise with having to kill enemies. For example, tomatoes are the weapon of choice to kill most Earthlings. However, they will do nothing against cupids. To kill those little bastards, you gotta either use Icarus Wings or Spring Shoes. And although you can’t kill moles, you can trick them with Decoys. But use a Decoy on bee’s, and they’ll pop it on contact.

This game is right up there with Bomberman on being fun with multiplayer. It’s only too bad that the sequel on the Genesis was a side scroller. Not as fun! :/