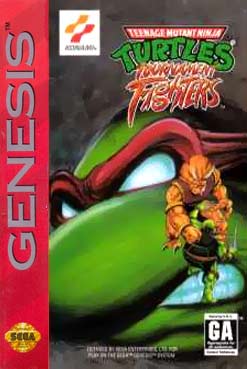 If you grew up in the late 80’s/early 90’s like me, your life probably was saturated with the Teenage Mutant Ninja Turtles. Those Heroes-In-A-Halfshell appeared just about everywhere including a number of video games.

In the early 1990’s, two of my favorite arcade games were Street Fighter 2 and Konami’s TMNT arcade side-scrolling brawler. When I was at home I used to stage one-on-one battles with my Ninja Turtles action figures and wish their was a TMNT game that was modeled after Street Fighter 2. Not too long after that, TMNT Tournement Fighters was released and I was both thrilled and peeved that Konami stole my game idea 🙂

Teenage Mutant Ninja Turtles; Tournement Fighters (Wikipedia Info) is perhaps one of the best licensed one-on-one fighting games prior to Capcom’s Marvel fighting series and was released on the Super Nintendo and the Sega Genesis/Megadrive in addition to an inferior NES version.

Review Tidbits:
“TMNT Tournament Fighters was inspired by the “sparring match” feature from the TMNT: Turtles in Time brawler. Basically, you could practice your moves in a 2-player sparring match with limited fighting options. That proved to be a very popular feature and so it spawned the Tournament Fighter series. The SNES version has 3 modes you can play the game in; Story Mode, Tournament Mode or 2-Player. The Story Mode is fun, though it only allows you to play as one of the 4 Ninja Turtles. Still, adding a story gives the game a bit more depth and I almost wish more fighters would do it the way Tournament Fighters did. In Tournament Mode you can play as any of the characters, including the villains, to win lots of cash.”
Forever Geek 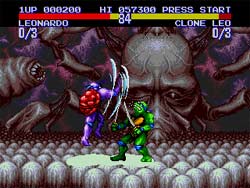 “The moves are some of the more creative I’ve seen. There are a lot of conventional moves- for example, Donatello fights a lot like Guile, with a sonic boom-style move and a flash kick (stick, actually) both done in the classic charge move combinations. Other characters have VERY unique moves, Casey being my favorite with the ‘rebounder’ where he reverses any projectile by twirling his hockey stick, and my favorite move in ANY fighting game that’s NEVER been copied- his time bomb, which he sets on the ground for a few seconds before it wastes anything in its path (including Casey). A well-placed hit with that move can take out a good 75% of someone’s health. Some of the Ultra Attacks are very amusing, especially Leo’s, but a few of them are just beefed-up versions of their fireballs. The power and speed selection is an interesting idea, but a gymnast is SUPPOSED to be faster than a beetle no matter WHAT.”
Sega-16

“The game has several play modes. The first one, Story, lets you choose one of the Turtles to go against the other six characters. In Vs. mode, you and a friend get to choose from seven characters: The Turtles, Casey Jones (that psycho hockey-mask guy), Hothead (a samurai dragon), and Shredder. You can even pick the same character (except for Hothead…something about a dragon spirit). The Practice mode is the same, except you fight against the computer. You can even gather three of your friends for the four-player Tournament mode.”
Hardcore Gaming 101

Additional Link
Forever Geek also pointed out some artwork for the game that you may get a kick out of.

I owned the NES version. I played it quite a bit because there weren’t many fighters for NES. I liked it well enough. Eventually I sold it for 30 bucks.

It should be noted that the Genesis and SNES versions aren’t even close to being the same game. Honestly, I don’t care much for the version on Genesis, but I’ve never played the SNES version (which I’ve heard is easily superior).

Oh, and Cyrax from Mortal Kombat 3 had a time bomb move of sorts. 😛

Sweet! Thanks for that additional info. You guys always keep all my facts straight!

I have the one for SNES, and it was easily one of my favorite games back in the day. The SNES one is far superior, although I really liked Casey – who was strangely absent in the SNES version.

I never played the Sega version but I had the SNES version and just as you said it was great game. I also use to enjoy the NES TMNT game which was a kind platform action game.

I still own the SNES version, and I must agree that I was surprised by how much of a solid and original fighter they made. My only complaint would be the fighter selection largely consisting of original characters. In the backgrounds you’ll see Rat King, Rocksteady, Beebop, the Nutrinos, and it just made me wish I could play as them! I kind of want the Genesis version just for Casey Jones.