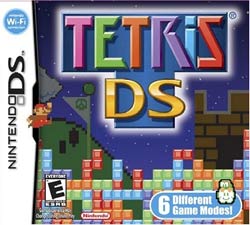 We have seen a number of Tetris “remakes” over the last decade, but none of them (consoles or portable) have really lived up to the standard set by the original Gameboy version of Tetris. That is, until now.

Finally, Nintendo has taken the time to carefully craft the perfect follow-up to the puzzler classic. Tetris DS takes everything that was great about the original Tetris and magnafies it without diluting the game.

As you may have seen from the screenshots I posted before, Tetris DS has some phenominal wifi multiplayer capabilities and has an unparalleled nostalgic connection with its classic Nintendo settings.

Review Tidbits:
“The game offers up intense moments, action, nostalgia, fun, wifi multiplayer, wifi connection action, and most importantly, Tetris done to perfection. There are so many gameplay modes here that it boggles the mind, it is hard to imagine anyone getting bored with this title. Even if the game didn’t have wifi connection play I would still say the same thing. Tetris DS is the Tetris title that fans have been longing for. Everything was handled with great care, from gameplay to the aesthetics.”
GoNintendo 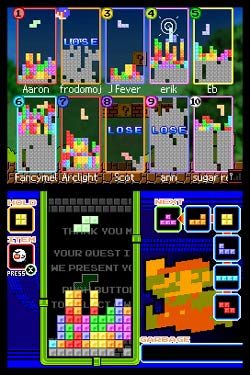 ” Even after reading up on Tetris DS’s six Nintendo-themed single player modes I was still unprepared for the amount of gameplay variation found within the game. It isn’t just that all six modes look and feel completely different from one another. Its details like Standard mode being playable three ways – vs. CPU, as a marathon, or allowing gamers to set the starting height and speed. Its things like Puzzle mode include two hundred puzzles to solve. Its details like Mission mode including five time trial difficulties, and a marathon mode. Tetris DS is simply huge, and goes above and beyond the call of duty with its single player offerings.”
Modojo

“The game also takes advantage of Nintendo’s Wi-Fi Connection as well. Nintendo has apparently learned a lot from some of their missteps with Mario Kart DS, as here opponents are penalized with an automatic loss if they drop out in the middle of a match. It is also easier now to see if you have friends online who are looking for a game, as an icon will pop up when you sign on letting you know that someone on your friends list is on the lookout for a match.”
eToychest

“Tetris DS is brimming to the rim with multiplayer options: player vs. player basic Tetris, competition Tetris with unique power-ups for up to ten players locally, two and four player Tetris competitions over the Nintendo Wi-Fi Connection service for worldwide play, and a new game design, Push Mode, that’s one of the coolest and most intense variations of Tetris we’ve ever seen. Even better, all the local multiplayer modes can be experienced with only one copy of the game – though every DS owner should buy this game, the ones who pass can still play against any owner of Tetris DS through the Download Play option.”
IGN

I just wrote a article about the original Tetris and how addictive it was. Check it out.
Looking forward to this version though if it as good as everyone is saying.
Racketboy email please so I can contact you direct. Thanks