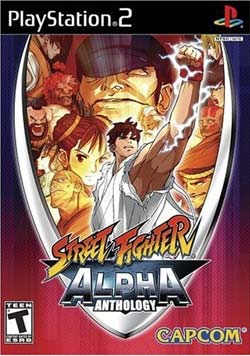 The Street Fighter Alpha Anthology has hit the streets and is ready to give 2D fighter fans a retro fix on their PS2s.

While SNK has been quickly putting out a number of its old titles via emulated compilations, Capcom took the time to create fully arcade-authentic ports for the PS2 resulting in a very solid compilation.

There may not be a ton of special features such as video clips or documentaries, there is some solid gameplay and a great deal of play modes and small extras to be found.

Review Tidbits:
“An extensive set of options allows for tweaks to each game (such as difficulty, turbo speed, and even color settings), but changes to these settings do not stick unless they are saved to the PS2’s memory card. Fortunately there is an auto-save option, but it must be enabled manually. Finally, players with a PS2 hard drive have the option of copying the anthology to disk for quicker play.”
PressTheButtons

“Though I’ll never be more than a casual player, and thus can’t make tournament-level calls on what is better, it’s obvious to anyone who spent time with some of the more crippled releases of the past that Capcom took the time to give this game some love.

What’s more, being arcade-perfect that same goofy rush I got from finding hidden stuff like mid-bosses and hidden characters is here. There’s something so stupidly fun about selecting a hidden character just by holding the selection cursor over a character for a few seconds and then pushing some buttons or moving things around, but this feeds that so nicely that I couldn’t help but grin. Then I remember that we have no more arcades with hardcore players in ’em save for bowling alleys and more “grown-up” arcades like Dave and Buster’s.”
TotalPlaystation 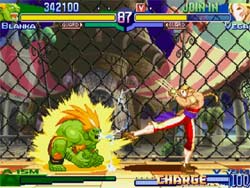 “If anything works here, however, it’s the game controls. It’s best if you have one of those third-party Street Fighter dedicated controllers at hand, so you can actually get into the controls just as easily as if you were playing on an arcade cabinet. If all you have is a typical PS2 pad, however, no worries, as the gameplay still works wonders. Like in previous releases, you can map your favorite buttons wherever and then get to fighting through a series of modes. The controls work fine and the ability to set off super moves with ease is a nice touch, although some of the later movements in games like Street Fighter Alpha 3 take a little practice, due to the numerous styles offered in that game.”
GamerFeed

I was always more of a SFA2 fan than a SFA3 fan. It’s certainly nice to see a complete Alpha compilation, but I’ll likely just pick up SFA2 for my Saturn.