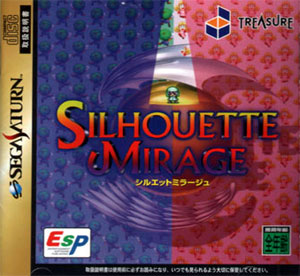 If you haven’t learned this by now, the Sega Saturn is filled with beautiful 2D games. And who better to create a unique 2D game than the cult-classic machine known as Treasure.

Treasure once again, pushed the 2D envelope to the max on both the Saturn and PSX with a little-known game by the name of Silhouette Mirage. Thanks to Treasure’s creativity, Silhouette Mirage has revolutionary play mechanics and an insane amount of depth. It features gameplay elements depending on changing colors. Treasure fans will point out that they took some of the concepts they learned in Silhouette Mirage and applied them to their later shooter masterpiece, Ikaruga.

Unfortunately, Silhouette Mirage was only released on the Saturn in Japan, so admittedly, much of the tutorial is confusing without a translation handy. Legendary localizers, Working Designs later brought the game to English-speaking gamers with a Playstation port. It is difficult to recommend one version over another — the Saturn version is technically superior in terms of animation, backgrounds, voices and such (see here for details), but of course the Playstation version is easier to jump into for the Japanese-impaired.

Review Tidbits:
“Silhouette Mirage’s gameplay centers on a very unique gameplay element that comes into effect as the world features inhabitants that are primarily either Silhouettes or Mirages. The Silhouettes and Mirages can be differentiated by their colors; Silhouettes are blue and Mirages are red. 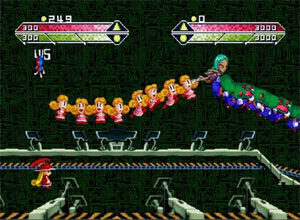 This is where the game’s complex play mechanics first come into play. When attacking an enemy of the same characteristic (Silhouette on Silhouette or vice versa), the shots will steal spirit power from the enemy and add them to Shyna’s bar. When attacking enemies with the opposite characteristic, the shots will cause damage. This seemingly minute element adds an enormous amount of depth to the Silhouette Mirage’s play mechanics.

The game’s innovation in design doesn’t stop there. Shyna has the ability to perform a wide-array of inventive basic actions and special moves. These include basic actions like sliding, dashing, grabbing, and throwing and more advanced moves like the Cash Bash, Grand Slam and Parasite Bomb. What separates this from other games with large move lists is the fact that each can play important roles in progressing through the game. Mastering a particular move or play mechanic can play an integral part in defeating some of the game’s very complex boss characters.”
IGN

“The world of Silhouette Mirage is a beautiful one. Graphics tarts will no doubt be turned off by the old school graphics, while fans of the genre should appreciate its nice artistry. Character animations are pretty smooth, and some of the bosses are just downright huge and awesome… Weapon effects are quite impressive as well for this type of game, while the backgrounds could have used a little more parallax. They tend to be a little flat, but suit their purpose nicely. Nice job Treasure.

If there was one word I could use to describe Silhouette Mirage, it would be charming. This game is filled with quirky humour and tons of personality. From the entertaining dialogue, to the characters themselves, SM creates a world all its own. While I won’t get into plot details, I can assure you that you’ll be chuckling to yourself on more than a few occasions.”
GamingAge 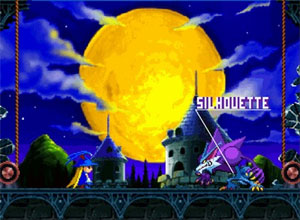 “Those looking for some fresh takes on the genre, this game offers plenty of action. The controls are simple to learn, or at least to learn all the moves that are actually important in the game. The important moves include being able to triple jump, shooting with auto aim, grabbing enemies and beating the money out of them, and dashing. That’s all the moves you’ll actually need to beat the game. There are other moves like sliding, and ducking, and doing one big attack that hits everything on screen, but they aren’t necessary, and often make the game harder if you try to use them. It’s simple if you want it to be, and it works better that way. Playing the actual game is a lot of fun. The actual levels are pretty simple, you just fight off a few Silhouettes and Mirages while absorbing some spirit power and beating them for their cash, which brings me to another point.

Everyone complains about the increase in the price for weapons, but if you simply drain an enemy of its spirit power, cash bash it, and then kill it, it’s quite easy to save up enough money for anything you want in the game. all right then. Throughout the levels you’ll run into multiple bosses (usually around three a level), and they are what the games all about, duh. At first they’re pretty easy, and stay that way till the end, where things get incredibly tricky. You’ll be dodging all over the place, reflecting attacks like mad, and shooting non stop. It may get incredibly hard at the end of the game, but it’s still fun, and you can save it almost all the time, whenever the game loads a new area it asks if you want to save, which is pretty often. So if you’re having trouble beating someone, just keep trying and you’ll eventually do it.”
thirteen37

About the Playstation version:
“After more than a year of delays, Working Designs has finally delivered Silhouette Mirage. This isn’t the same Silhouette Mirage that debuted on the Saturn nearly three years ago, however – the game has somehow transformed from a delightfully quirky platforming romp into an average, unbalanced, and tedious exercise meant for “hard-core gamers.”…

Because Silhouette Mirage is a port of an old Saturn game, it is probably no surprise that the graphics are dated. While the style is appropriately wacky, there’s very little that’s impressive about Silhouette Mirage’s graphics, even if the game “pushes the 2D capabilities of your PlayStation game console to its limit.” While Silhouette Mirage’s catchy, upbeat tunes are perfectly suited for the game, the localization team has outdone itself in the annoying-voice department. The game’s unnecessary rebalancing makes this especially obvious; for example, players will be forced to hear Shyna yell “BAM!” every time she hits an enemy up for cash.”
Gamespot