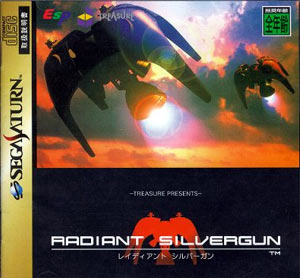 Known as one of the Holy Grails of console game collecting and one of the greatest 2D shooters of all time, Radiant Silvergun does not need an introduction for those schooled in old-school cult-classic gaming. But for those that have begun to search for the greatest games that never made it to the United States store shelves, this classic shmup from Treasure is an excellent place to begin.

It has a spiritual successor in the Dreamcast/Gamecube classic, Ikaruga and is rumored to have yet another sequel in the works.

Review Tidbits:
“The game is considered by many to be the pinnacle of the ‘maximalist’ school of vertical shooter design. (Contrast this with Ikaruga‘s studied minimalism.) It features a unique and innovative weapons system, with seven weapons available at any time. The player has three buttons to control the weapons; the weapon fired depends on the combination of buttons pressed.”
Wikipedia 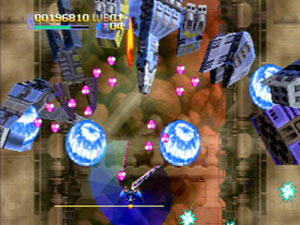 “Radiant Silvergun, which was an arcade release in Japan, epitomises these ideas with a single concept – No Powerups. Usually the gamut of shooters out there feature a shitload of powerups, used to make your ship bigger, badder, and meaner to survive the onslaught of enemies waiting to annihilate you. Instead, Radiant Silvergun takes the unique approach – have all different weapons at your disposal anytime, and pressing certain button combinations will unleash different weapons. For example, button A unleashes a straightforward shot, B unleashes tracking green shots, C causes a split shot with a mortar effect. Combinations of A+B, B+C and A+C add another 3 weapons (Homing lasers, Back shot and a lock on laser lightning thing).”
SHMUPS!

“Along with its “rare” status and über price-tag, RS is also well-known for its very high difficulty. It’s a game that truly takes no prisoners and relies heavily on memorization of the levels and attack patterns. It might be possible with some games, but there’s simply no way a first-time player could fluke their way through this game on a single credit. It will take even the best gamer hundreds of attempts and hours of dedication to manage such a feat. For some, the game will seem impossible irrespective of how many times they play it. Make no mistake, Radiant Silvergun is a VERY hard game.

On the initial stages, the attack waves often appear invitingly set-up to be chained relatively easily, but later on, things get very complex, and almost puzzle-like. And because you’re often left looking for just one particular colour of enemy to continue the chain, things can get very hectic when more and more enemies of the “wrong” color are left alone. Added to this, is the fact that the stages are often labyrinthine with little room to manoeuvre. ”
NTSC-uk 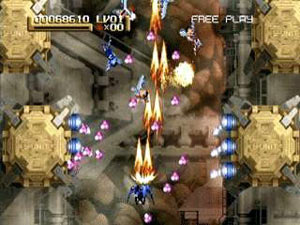 “This [weapon system] creates a much more complicated and interesting game play element, as you’re switching between weapons on the fly, and trying to determine which weapon would be most effective against which boss, or which stage of each boss.

But to add to that, by combo-ing your kills by shooting only certain color bad guys and not missing you level up whatever weapon you use to do it, which inherently increases the power of the combined attacks. Also, once powered up, the weapons stay powered up. When you get a game over, you’re also given the option to save. You’ll start at the beginning next time, but your weapons will still be powered up. Which is a good thing, since you’ll have to power your weapons up a lot, and earn a bunch of lives and continues in order to defeat the final boss.”
Defunct Games