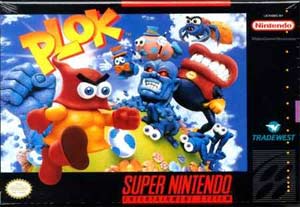 The 16-bit era was filled with a number of platformers. Most of these platformers were mediocre games that were nothing but wannabe Mario and Sonic games. However, there were a small handful of platformers that were worth a look, but rarely received any attention because they got lost in the shuffle.

Plok is a gem of a platformer that was released on the SNES that looks like a precusor to Rayman. While it did not have the polish and creativity of a Mario or Sonic, it was a well-rounded game that exceeded in gameplay, colorful graphics, and impressive sound.

Review Tidbits:
“One of my favorite games to spring from the great cartoon character game mascot wars of the 16-bit generation has to be Plok for the Super NES. Released in 1992, Plok tells the story of our intrepid hero (Plok), a little fella made up of what appears to be boots, gloves, a hangman’s hood, and a torso. Plok’s self-assigned mission was to drive the nasty fleas from his island, a feat accomplished by shooting his own arms and legs at his targets. Without his limbs poor Plok is defenseless, meaning he must hop around on his torso until he can recover his missing parts. The game is downright hard to complete, as it’s very long and lacks a save feature or password ability. Taking on the world of Plok is one hell of a commitment even today.” 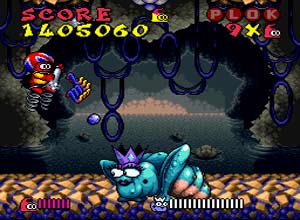 “Wow. Just wow. The only reason [the graphics] didn’t get a perfect 10 is that the world map could have used a little more detail. The levels themselves, however, are definite 10’s. The colors are amazing, and the animation is the most fluid I’ve ever seen on the SNES, even surpassing Earthworm Jim on most counts. The levels are very bright and surreal, and the closest description I can give is that it feels like playing a cartoon. Yes, they’ve said that about a lot of games, but this one does it right.”
Cryogen Glacien @ GameFAQs

“The music steals the show even more than the graphics. I should probably stop falling in love with videogame soundtracks all the time, but when it’s as good as this, it’s difficult not to. All of the music is very well composed, and although there are a few upbeat and boppy tracks, the general mood it generates is a dreamy, layd-back and wonderfully relaxing (but sometimes spooky) one. Extra kudos must go to the boss BGM, which is absolutely brilliant: it has a superb beat and a great scary laugh cuts in a few times. ”
NintendoLand

“As in gaming tradition, Plok has a common item that he can collect throughout his travels. Plok’s token pick-up are shells, which award extra lives and serve as ammunition for a special am 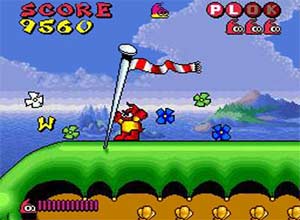 ulet received part way through the game. Also within tradition, Plok has numerous power-ups that come in the form of “Presents” scattered amongst the majority of levels. If Plok locates one of these colourful gifts he is immediately transformed into a more powerful fighting machine for a brief length of time. These power-ups include a flamethrower, boxing gear, a shotgun, twin handguns and even multiple rocket launchers. Specific presents yield vehicles that Plok can use in some later levels; they can be fairly difficult to find, but reward the effort made to discover them with an often much easier path through the level. Plok can also obtain special suits for specific Boss fights; these suits are often essential in order to overcome the Boss.”
Wikipedia

Plok really needs a comeback. As I said when covered the game’s art archive on PTB, the character is still owned by his creators, so we may see a sequel someday after all. Here’s hoping.

Do I feel foolish. I meant to link to the Plok art archive.

Oh my!! This brings back memories!!

I remember renting this title many times at Blockbuster!! It was my favorite game for the SNES. The graphics are beautiful, and it was slightly following the claymation at the time. I loved it!!! Thx for reviving a forgotten gem!!