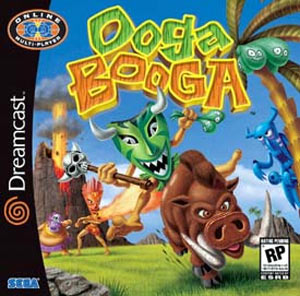 Much like the N64, the Dreamcast was one of the first consoles to become a good party machine due to its four controller ports as a standard feature. And while their was a great deal of 4-player sport, racing, and FPS games on the Dreamcast, there were not a lot of dedicated party games for the little white console.

Sega, however, was kind enough to release a quirky game by the name of Ooga Booga as the Dreamcast’s USA retail life came to its end. Because it was released at a time when most people had given up on the Dreamcast and it suffered from a strange name and concept (like many other great Sega games), it didn’t gather much attention.

Oooga Booga’s takes some simple gameplay mechanics and combines it with a distinct polynesian style and tone to create a additive tribal battleground that is compelling for veteran gamers, but inviting enough for non-gamers.

Ooga Booga also featured online multiplayer capabilities that could have been a real hit if there were actually enough people online on a regular basis. If given another chance on a modern console with an established online setup like the Wii or XBox 360, Ooga Booga could be quite a hit.

Review Tidbits:
“The gameplay is actually pretty similar, whichever of the 3 game types are chosen. In each case the player guides their Kahuna around the island, attacking the other players’ Kahunas with a number of different mechanisms. The basic attack is a club swing, which adds 2 points to the batters score and sends their opponent tumbling head over heals. The Kahunas also have a simple ranged attack, whereby they can throw a shrunken head at an opponent for a 1 point score. These shrunken heads are available in limited quantities and managing their collection and use is critical when playing against advanced opponents. The third attack form is the use of spells. Spells appear as icons that can be picked up and used by all Kahunas, but cannot be stockpiled in vast quantities. Spell effects are similar to those found in Populous with fireballs, lightning strikes and whirlwinds all making an appearance. The scoring for the spells is well balanced, with spells like lightning, which are nearly impossible to dodge and capable of striking multiple opponents only scoring a single point per hit. The fourth type of attack is through the use of the native wildlife on the island. 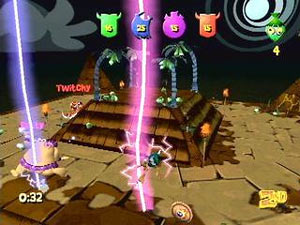 Players can approach a bird or boar and stun them with a swing of the club and then jump on for a ride. Boars careen around the island at a fixed gallop, turning under the command of the player, butting into all and sundry sending opponents soaring through the air. Birds on the other hand afford the player the power of flight, with full control of altitude and direction; once airborne, players can launch homing heads (a sort of homing missile) on their adversaries below. The final trick up Ooga Booga’s sleeve is the inclusion of Tikis (totem poles), which provide a much-needed strategical element to the game. For the cost of a large number of shrunken heads, Tikis can be awoken and aligned to fight on behalf of the player, attacking any nearby enemies, or enemy Tikis.”
NTSC-uk

“Ooga Booga is quite an easy game to pick up and play. The controls are pretty tight, and everything generally behaves as you’d expect it to. I’m glad Visual Concepts included the ability to choose between Automatic or Manual camera, though. While the system does a decent job of tracking your character, switching to manual allows for faster turns – and in a game like this, speed is vital. Ooga Booga can be played alone, or with up to 3 other friends (offline and online). Tribal Trial is the game’s single player mode. It breaks down the game’s weapons, techniques, and modes of play into various tutorials. After completing each lesson, there is usually a “free for all” match, letting you test your new skills in a real-game environment. Some of the lessons can be a little boring, but generally the Tribal Trial is a good challenge. In Offline Skirmish, 1-4 players can duke it out in the game’s various events. Weapons, Animals, and stages can be selected and included, depending on which you have unlocked through the Tribal Trial missions. The game plays in split-screen, and although the frame-rate drops to around 30fps, it still runs smoothly and never hinders gameplay. At times, visibility can become a little difficult, but the problem is remedied somewhat by setting the camera further away from your character.”
PlanetDreamcast 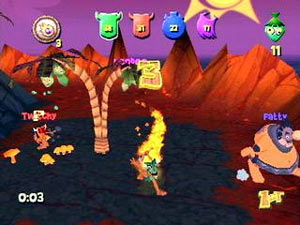 “If there are any faults – beyond the simple nature to the visuals – that can be found in Ooga Booga, it comes from being a game that’s dependent on being a multi-player game. Sure, you can play the game offline; with over 40 different one-player missions (in Tribal Trial mode) with tons of things to unlock. By the way, to fully appreciate the game, you must beat 39th trial to unlock the absolute BEST character in the game, but as you learn through progressing the Tribal Trials, they get insanely hard. And of course, you can take on the computer offline in a quick offline skirmish, but the AI in the offline skirmish games isn’t that hard, even on the most difficult setting. For the most part, camera angles are well-done, but for those playing with the automatic camera option, it can be a pain sometimes if you’re against a wall. Lastly, even though you have a number of spells and tactics to use, there aren’t any unique attacks for each Kahuna. But these are more gripes than actual flaws in a very solid, highly entertaining Dreamcast title.”
IGN

Additional Note:
You can find an interview with the developer at Gaming Age

Such a good game. Really.

This was such an awesome game.. never played it multiplayer but played for days on end single player.