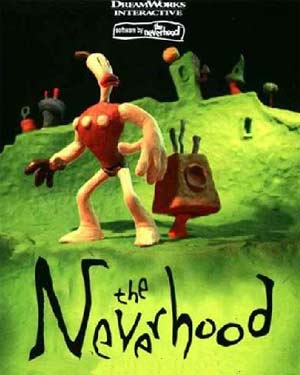 Some developers (in this case, Dreamworks Interactive) actually used their creativity to create a graphical style that had the look of a cutting-edge 3D game, but actually having a traditional 2D game environment such as the Lucas Arts adventure games.

The Neverhood (aka Klaymen) used clay animation to create an engaging and comical gameplay experience that is still worth playing. Like traditional adventure games, there is quite a bit of puzzle-solving in addition to comical elements. With this quirky game, however, there is next to no dialoge — instead our characters simply delight us with their priceless expressions.

Review Tidbits:
“But there are a few things that we should perhaps warn you about. There is only one place in the game where you can die, and it is clearly marked. Just believe them when they tell you, and don’t try it unless you save first. Also the game has a built in randomizer, so many of the puzzles won’t have the same solution twice. This means that you must solve them yourself. You won’t find the solutions in walkthroughs, just suggestions about how to approach them.

Most of the buttons and switches, etc, that you see along the way all do something, but often it’s in a remote location and you can’t immediately see the results. So it’s important for you to understand that, unlike in most games, these all operate like a light switch… that is, they’re either off or on. So when you encounter one that doesn’t seem to do anything, make sure that you hit it only once, or you’ll be turning it back off again.”
Mr. Bill’s Adventureland 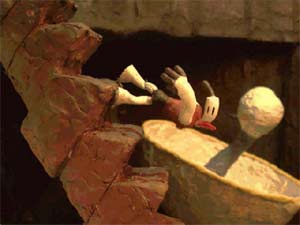 “Oddly enough, The Neverhood found a fair bit of popularity in Japan. Over there, it was was released on the Playstation under the moniker “Klaymen Klaymen”. Aside from the language, there are a few notable differences between it and the original PC version. The resolution needed to be downgraded, but it still looks pretty good, and most of the animation is intact. It being on the Playstation, there are a LOT of loading times where there weren’t any before, such as between screens, and even when Klaymen does his animations when he’s holding still. This is annoying, but what makes it even more so is that the music starts over every time it happens. There is also a bit of a tutorial when you start the game. It mainly consists of little signs saying something like, “Push the circle button here!” so it’s not all that special. The voices are also in Japanese, but sadly, they’re very monotone and completely lack the soul that the American voices had. Probably the sole positive addition is the sound test in the options menu, which is really the only thing this version has going for it.”
Hardcore Gaming 101

“Neverhood is a ‘novelty’ game if ever there was one. It’s quirky and quaint with one of the cutest characters around. So it doesn’t have an inventory and the cursor is limited so your control is limited, but somehow I found it in my heart to forgive these ‘shortcomings’. It’s so visually captivating it’s one of those games where it’s not a good idea to load it up and show it off to your visitors to introduce them to computer game playing, because you’ll never get rid of them.”
QuandaryLand

Similar Posts From These Categories:
Playstation

Gasp! I totally missed this post…and Neverhood is/was one of my favorite developers. Oh yeah, one error: Dreamworks Interactive wasn’t the developer, it was created and developed by “The Neverhood” themselves, DI being the publisher.

I’m glad someone finally mentioned their work after all these years. Earthworm Jim, The Neverhood, Skullmonkeys…Doug TenNapel is both a God and the alien cat overlord (he even has a new cartoon starring more cats).