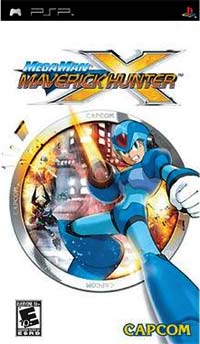 As you may have noticed Capcom is on a rampage of releases for the PSP. They have also been pushing their Megaman franchise harder than ever. Soon after the MegaMan X Collection for the PS2 and Gamecube, we have Maverick Hunter X for the PSP — essential a remake of the original Megaman X game for the SNES.

This PSP remake has received very solid scores, but is not without its issues.

Review Tidbits:
“Compared to other Mega Man titles, this one is a push-over in terms of difficulty, but newcomers to the series might still have a hard time with it. On hard mode I had trouble beating my first boss, but once I found the dash boots and a reserve energy tank I cruised through the rest quickly. Besides the boots, you can find extra armor and a gun that unlocks the ultimate powers each special weapon. This adds a new dimension to gameplay as it doubles the number of attacks and tools to your repertoire, including temporary invincibility.”
MyGamer

“Just looking at how X is rendered, blocky instead of a smooth sprite might make some people wish for the original visuals instead of the “update”. The new 3D effects have another price too, more slowdown. It wouldn’t be a Mega Man game without floating through the air back to the ground when more than ten icons flash on the screen. We would expect some kind of slowdown with the Super NES’s level of hardware, but the PSP is a different more powerful beast. Instead of having no or less slowdown Mega Man X Maverick Hunter has even more.”
Siliconera 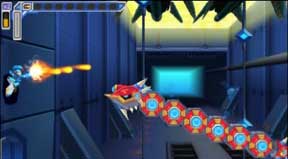 “But not only did Capcom preserve the gameplay, they also added an entirely new mode, Vile Mode. Unlocked after beating the game with Mega Man, Vile mode puts players in control of Vile, Mega Man’s arch rival. More importantly, Vile handles completely differently than Mega Man, able to equip three weapons on various parts of his body. Each weapon is controlled independently, fired by Square, Triangle, and Circle. And though Vile ventures through the same stages as Mega Man, enemies and items have been moved around, resulting in an entirely new experience. ”
GamingAge

This is an ancient article, but I wanted to give my two cents. I was a huge fan of the original Mega Man X on the Super Nintendo (like really, HUGE; it’s one of my favorite games), and this game was pretty much the reason I got a PSP. I wish these reviews didn’t stress the gripes they had with the game, because it’s really quite amazing and a tremendous value. The new visuals are awesome (I mean, really, if you long for the old visuals, boot up your Super Nintendo, nothing wrong with that), the anime cutscenes, voice acting, and original footage are all amazing and really add to the backstory of this game, something I really appreciated. Finally, Vile Mode is an AMAZING addition, as Vile’s various weapons are great fun to use, and can be combined with nearly endless variety. It’s a completely separate experience. Take it from a bonafide Mega Man X fan, this is one of my favorite PSP games