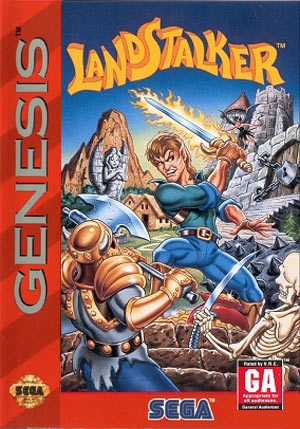 Imitation is the sincerest form of flattery. If that’s the case, The Legend of Zelda has been flattered many a time. Starting with Golden Axe Warrior on the Master System and Beyond of Oasis on the Genesis, Zelda has had many a clone.

Landstalker is yet another action RPG from Climax Entertainment that hit the Genesis in 1993 and provided Sega fans with an alternative to Zelda on the SNES. However, if you do dive into the game a bit, you will realize it is significantly different from Nintendo’s flagship RPG. Unlike Zelda, Landstalker features an isometric viewpoint and displays graphics that rivaled even a good SNES game.

Over the years, Landstalker has found a following among Sega Genesis RPG fans. The gameplay starts out relatively simplistic, but gradualy becomes quite a challenge. The puzzles and mazes actually offer some difficulty, mainly because they are original and well designed as opposed to being repetitive and predictable.

A sibling game called LadyStalker was released on the SNES in 1995 (in Japanese only). The Sega Saturn game Dark Savior (produced by the same company) is considered its spiritual successor in many ways. The main characters from Landstalker, Nigel (Ryle in Japan and France) and Friday, also reappear in the Dreamcast game Time Stalkers.

There is actually a remake of Landstalker due out on the PSP. It was originally slated for a Spring 2006 release, but that obviously didn’t happen. Now it’s simply a “TBA 2007” release.

Review Tidbits:
“Landstalker is truly one of the great action/RPGs out there. I don’t see the comparisons some people make to Zelda , as the only thing the two really share is the genre of which they are a part. Some common elements may be found in both but most games of this ilk use them as well. Climax’s title is original enough to stand on its own and is easily one of the best of its type. With a quest clocking in at about 30 hours, there’s plenty of gaming for those looking for a classic title for a rainy day.”
Sega-16 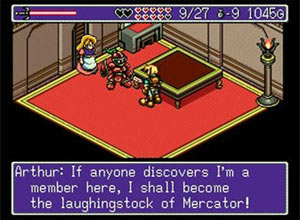 “Enemies abound and come in multiple shapes and sizes, and each one uses its own unique strategy to attack. While idly mashing the attack button is your only real offense, any player who just does that will be torn to shreds rather quickly. However, because there are so few strategies to fight enemies with, the game’s battles do get repetitive. Fortunately, you usually have enough money to buy whatever you need without hours of training…

While battle does make up a good percentage of the Landstalker experience, the rest is 3D platform hopping and puzzles. Now, the problem with 3D platform hopping is that the game just isn’t in 3D. No shadow effects, no way to determine depth, and less-than-perfect controls make some of these leaps nearly impossible, although necessary.

As for the puzzles, these include some of the most bizarre block puzzles I have ever seen, as well as few tests of timing and skill. Others involve following poorly translated clues, finding invisible passages, or just having some good old mini-game fun. While they don’t quite match up to the mini-games of today, I’m sure you’ll enjoy such classics as Chicken Racing or the ever-popular Greenpea’s Gaming Emporium (it’s got one game where you throw a bowling ball on little platforms in the air. Swell, ain’t it?).”
RPG Fan 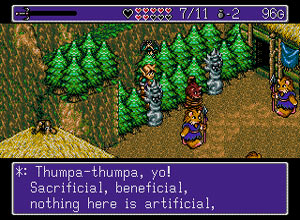 “One thing I like best about this game is the dungeons: they’re HUGE! They’re also puzzling. You’ll almost never beat a dungeon without making a save, and NOT because they’re hard )which, truthfully, they’re not) but because you’ll take so long in them, that it’s impossible to complete most of them before your parents come in and say “Food’s ready!”.

Most dungeons consist of uncovering as much as possible, then backtracking if you get stuck somewhere (Lord knows that the only reason I got stuck in some dungeons was because I missed a certain switch!) Unlike most games of this type, though, there are no puzzles that force you to restart at the beginning if you screw up, and missing a jump will usually only take away a little bit of life and force you to attempt the jump again (you can’t die by falling down a pit.) However, most dungeons don’t have a priest in them, so if you die in those dungoens, you must start at the beginning (the ones without churches close by are usually the easiest ones though, so it’s no problem).”
Harcore Gaming 101

Ugh…I’m not a fan of this game at all. The controls are just atrocious. Oddly, Light Crusader, a game that I absolutely love (and is pretty similar to Landstalker), is generally regarded as below average.

At the very least, Light Crusader pulled off similar gameplay with superior controls and better jumping sequences (thanks to the SHADOW beneath your character :P) overall. And the magic system, in my opinion, was very cool, albeit somewhat limited.

You are clearly a simpleton and too stupid to understand what a fantastic 16 bit game this is. Fuck off with your idiocy!

To me this is REALLY close to being the best 16 Bit action RPG (just behind Link to the Past and just ahead of Popful Mail and a few others).

This game really grabbed me and pulled me into it’s universe and I remember having a very emotions about the plot (although that was at age 16). It’s frustrating at times but if you’re going to play through a 16 big action RPG I’d definitely recomend it. Anyone who liked Alundra should check it out too, Alundra is basically Landstalker w/o the isometric view.

I absolutely loved this game back in the day. I’ve never been that big a fan of RPG’s, preferring shorter experiences but this is the exception. I got caught up in the story and adventure and thought Friday was a great cheeky sidekick. I remember even calling those expensive phone numbers that give you hints because I got stuck! Parents were not amused. Still got plans to revisit this game one weekend.

I loved this game. Definitely one of the best 16-bits RPGs, and also one of the most underrated games ever. The gamepaly felt as a very original experience, with its isometric view and original design.

To kevinski: I challenge you to beat the first dungeons and still keep the same opinion about the game.

One of my all time favorites, this. Used to find the jumping puzzles hard, but after you figure the visual trick out they’re easy. Can breeze through the game in a day nowdays.

Dunno why people are saying you have no shadow in the game, though. It’s there when you jump, which is when you need it.