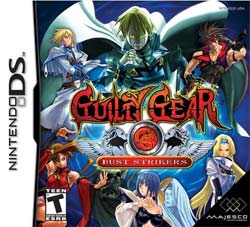 The Guilty Gear series has made great strides over the last few years to compete against the best from Capcom and SNK’s 2D fighter offerings.

I was fairly excited when portable versions of Guilty Gear were announced for both the PSP and Nintendo DS. However, I had a dirty feeling that both versions would be quick conversions.

From the reviews that I have seen on the Net, it looks like my predictions came true. While they may be mild diversions for fighting fans, but it doesn’t look like Dust Strikers lives up to its potential.

Review Tidbits:
“While Arc System Works’ first attempt at making a four-player Guilty Gear game wasn’t what you’d consider to be a failure, Guilty Gear Isuka was a noticeable departure from the style of gameplay fans of the series had come to expect. Added problems with the controls turned off gamers and as such, Isuka wasn’t considered by many to be a great title. With Guilty Gear: Dust Strikers, the latest title in the franchise, the series takes a massive departure from technical fighting to a style of game in the same vein as Jump Super Stars and Super Smash Bros. Unfortunately, Guilty Gear: Dust Strikers is handicapped more by the console it’s played on rather then its own devices.”
eToyChest 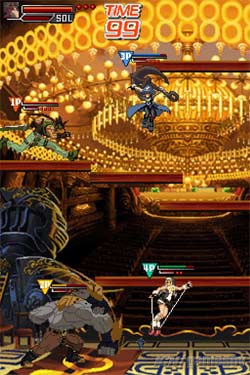 “Considering the lower resolution of a DS screen compared to a TV screen and it’s limited capabilities compared to a current-gen console, the graphics here are actually really good. They are much higher quality than in the GBA iteration of the series, and the characters actually look pretty close to their PS2 versions. As for the backgrounds in battles, they are high quality and are really nice to look at. They basically seem like they were taken out from the PS2 games.”
GameBrink.com

“Guilty Gear Dust Strikers is a extremely cool game that is full of some really amazing innovations, but ultimately ends up a victim of its own creativity. The dual-screen multi-tiered fighting is a really neat idea, but when you have trouble spotting your own character – much less controlling him or her in battle – it is really a bummer. This is especially true for those of us who have played any of the other Guilty Gear masterpieces.

As it stands, Guilty Gear Dust Strikers is probably the best fighter on the DS – then again, there really isn’t a whole lot of competition out there right now. I suggest that everyone at least take a look at the game – if not for the innovative features and minigames, at least to get a look at the kooky cast of fighters that Guilty Gear brings to the plate.”
Game Chronicles

“The gameplay works alright, for the most part, but also has some quirks in terms of its jumping from platform to platform. You have to basically tap up or down to move around, and doing so while trying to pull off a number of your moves gets downright confusing at times, especially if you’re trying to stay alive on what little power you have remaining in your bar. It’s not horrible, by any means, but it could’ve used a bit more adjustment to have a natural flow, like [Super Smash Bros] Melee did.”
Modojo