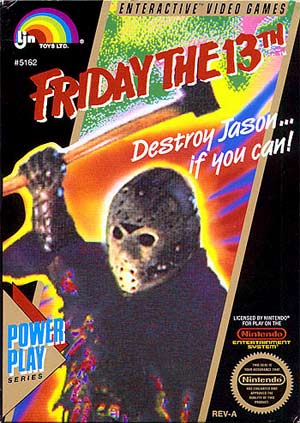 Today is Friday and it happens to be the 13th of the month. So what better game to talk about than Friday The 13th for the NES.

Ok, so there are better games out there, but I couldn’t resist. While many NES fans hate the game, there is a certain charm and/or nostolgia about it…

Review Tidbits:
“Friday the 13th puts you in the middle of Camp Crystal Lake, where you attempt to save children from Jason. As you stroll down the various paths, zombies who all look identical climb out of the ground and attack. Sometimes you’ll find a rock or weapon to put these guys in their place. When you enter a house, a confusing first-person view attempts to convey the illusion of exploring it. It doesn’t work well, and you’ll feel like a mouse trapped inside of a maze. Outside the situation isn’t much better. As you move from path to path it’s too easy to get lost and go in circles. There’s just no sense of direction in this game. There’s no sense of suspense either, although the zombies jumping out of the lake did scare the heck out of me.”
The Video Game Critic

“In retrospect, I suppose the game simulates the Friday the 13th experience rather accurately, as the counselors never stand a chance against Jason and neither does the player. I remember Nintendo Power magazine ranked this as one of the 10 worst NES games of all-time. I think that might be a little harsh, honestly. The game is pretty bad, but no way is it worse than Who Framed Roger Rabbit, TMNT 1 or Dragon Power. Friday the 13th is mediocre at best, though playing Punch-Out against Jason is actually pretty cool.”
Forever Geek 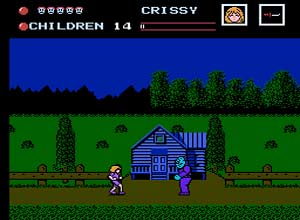 “After playing it again recently, my opinion of the game really changed. Back in 1992, I had no patience and wanted to fight Jason right away; and I got easily frustrated because I could never beat him (not even once). Now a days, I see the game very differently. True, the game IS frustrating. But after closer examination, it seems to me that you need a lot of patience to beat the game. And now, the map does make sense. The designers, though they used a really screwy design, placed everything so that you have to walk a lot to reach Jason. That adds to the challenge. You have to use all of the counselors to beat Jason, since it will take a lot of effort and quick hands (not to mention a well-placed machete hit). If you’ve got the patience, go for it. It’s a good game, even though it’s showing it’s age.”
VGMuseum

“This is pretty much the flagship title on the Nes that people love to hate, but in truth, it can be fun. You just have to give it time, which most people aren’t willing to do because of the games unstable structure. I don’t have 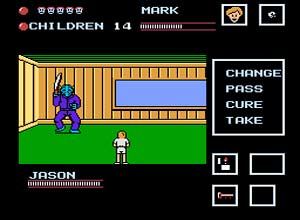 the manual, but what I gather from the game is you play as 6 camp counselors that are trying to stop Jason from killing everybody. I really didn’t know too much about this game until I bought it along with my sudden interest gain in the Nes, even though my brother’s friend did bring it over a couple times back in the day. Now I see why people love to hate it. It was made by LJN the company that’s known for making lousy games (Back to the Future, Jaws, X-men).”
NES Player

This is one of my favorite nintendo games! I can’t believe people didn’t like this. We always did!

I guess it’s an acquired taste 🙂

This game really is a great game.

The map : The map is really easy to figure out. It’s simple : left takes you clockwise, and right takes you counter-clockwise. And it’s opposite in the lake. It’s not rocket science.

The houses : I never found the houses very difficult to go through. There’s only 2 designs. So once you figure that out, then it’s not so bad.

I agree with DeadMetalHead. The game isn’t too hard to figure out. I was 7 when I originally played this and I still managed to beat it. Kids nowadays with their Halos and Little Big Planets, can’t figure out simple 2d platformers. Let alone even understand them.