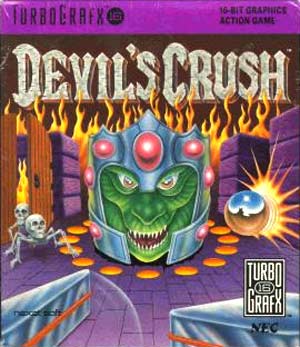 The TurboGrafix 16 (aka PC Engine) only had a handful of high-quality exclusives, but Devil’s Crush (and its prequel, Alien Crush) is one such game that holds up quite well over time.

Devil’s Crush is a pinball game that features a creepy theme and set the standard for video pinball games. This classic has been among the imspirations for newer pinball games such as Pinball of the Dead and Odama.

I found this gameplay video on YouTube to give you a better feel for the game before taking a look at the reviews below.

Review Tidbits:
“The game consists of 3 levels or playfields, each revolving around a different element… All three playfields offer something different and all three have access points you can open to enter bonus areas…. There are a few problems with ball physics, sometimes it seems like it’s sliding around instead of rolling, but overall the feel is genuine”
bits & bytes & pixels & sprites

“The graphics of this game are extremely well done. They are colorful, detailed, and well animated, while effortlessly conveying the dark and moody theme of the title. Hooded monks, skulls, dragons, even the board itself is made up to look like the cobblestones of a medieval town. The movements of the monsters, the lights of the table, the subtle animations that adorn every aspect of this game draw you in and keep you glued to the game just to keep discovering what other little touches the designers included. As far as pinball games are concerned, this is one of the best looking of all time and that is still true today.”
The Armchair Empire 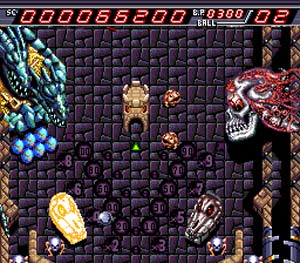 “This is one of those titles that you sit down to play at noon on a Sunday with nothing to do and end up tearing yourself away at midnight to try and sleep. Pinball games are all about scoring points, and this game gives you literally hundreds of ways to do so. Whether you’re aiming to break the coffins near your bumpers at the bottom of the first screen to increase your multiplier count, shooting for one of the numerous cubby-holes in the board to score big or get into one of the 6 lucrative (and difficult) extra stages, or working your ball up to the top screen to take down the raving occultists for accumulating bonuses, you’ll never end up playing this table the same way twice. The game also has a multitude of secrets just waiting to be discovered within its demonic denizens… The possibilities are seemingly endless, and you’ll begin to feel as if you’ve really sold your soul to the Devil as this cart keeps you captive for hours on end.”
GameFaqs

Similar Posts From These Categories:
Arcade

I love this game, but it’s not exclusive… you can also play it in Megadrive 😉

Yeah, it was exclusive for a while, I believe, but it was ported to the MD/Genesis and released in all markets, I believe. My fav pinball game ever, tho.