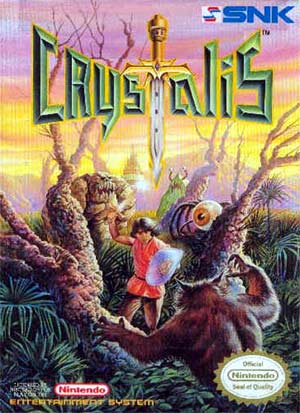 When you think of SNK, 2D fighters and Metal Slug games probably come to mind. However, you may be surprised to know that one of SNK’s first successes was actually an RPG for the NES that rivaled Zelda

In SNK’s Crystalis, the mechanics and story are best described as the precursor of SNES’s Zelda:A Link to the Past. Despite its quality, Crystalis never became a runaway hit, although it is considered today a cult classic among other titles as River City Ransom and Terranigma.

Even in these early days, you can see SNK’s skill for maxing out limited hardware to create colorful creations that were not only beautiful, but also had solid gameplay.

Review Tidbits
“I’ll say flat out what REALLY makes Crystalis fun and exciting. The storyline makes you want to keep playing the game until you beat it. It isn’t like the standard adventure/RPG. Most take some time to get involved but not this one. It’s great from the beginning. I don’t know if there are any other NES games (except for hard core RPG’s) that have as many people to talk to as this one. Not only that, but depending on the situations, people will tell you different things depending on what events have occurred in the storyline.”
Hardcore Gaming 101

“SNK’s action RPG classic, Crystalis, basically takes everything that made the original Legend of Zelda for the NES so good, and makes it exponentially better. The original Zelda was pretty much the template for the genre, so one would expect the formula to be improved as more and more Action RPGs graced the big grey box. Well, Zelda II: the Adventure of Link was a big let-down to many a Zelda-fan, if mostly due to the side-scrolling point of view. Crystalis is everything the Zelda sequel should’ve been, and my personal favorite Action RPG made for the NES.”
Forever Geek 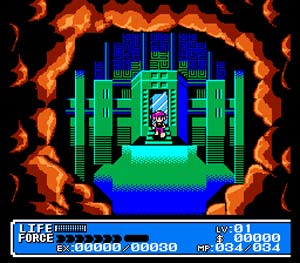 “Combat in Crystalis, of course, is real-time, with the player gaining up to four elemental swords during the game, with enemies being strong or weak against certain types. The player can also hold down the attack button to charge up the current sword and release an energy wave of sorts, and four elemental orbs/bracelets acquired throughout the game allow for two additional levels of charging, with the highest and most powerful level consuming MP. Yes, there’s magic, as well, ranging from HP-healing to condition-curing to teleportation. Levels are increased through experience gained from killing enemies, with a cap at level sixteen.”
RPGamer

This is definately an A list NES game. The only games I’d say are on par with it being Final Fantasy, Zelda, Metroid, SMB3, and Castlevania 3. Has anyone played Golvelius on Master System? Chrystalis seems like an improved sequel to this game, the graphics are actually pretty similar even.

Seriously SNK, why did you forget this game?! Sure you had mandatory level requirements, but the game was so fast-paced!
It’s like iREM totally dissing MetalStorm.

(Also, the GBC port — not as good. It had a standing-still animation and voices and XP-rollover… but it made enemy AI easier, took out elemental weaknesses, let you attack downed enemies, at the same time let enemies attack you from off-screen, nerfed the sharp dialog, made grinding more painful and took away almost all the good music.)