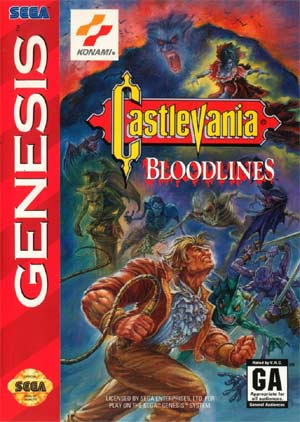 Castlevania is possibly the best example of a classic franchise that, for the most part, has stayed true to its two-dimensional roots and has pushed the limits of the 2D power of a number of consoles.

While Castlevania: Symphony of the Night

and the new Dawn of Sorrow

have received most of the praise, Castlevania’s only appearance on a Sega console is still a highpoint in the series history.

Review Tidbits:
“The games six stages aren’t exactly the most challenging ever devised and it is quite short for a Castlevania game. This is a definite change from Konami’s other franchises on the Genesis (Like Contra Hard Corps). Inhabiting these stages are some familiar faces from the Ax throwers, blood skeletons, and of course the skull statues…

Konami was one of the few companies willing to go all out with each of their Genesis titles and it shows. Every known effect that a 16-bit console can pull off is used. The Leaning Tower of Pisa (stage three) is especially notable with it’s ever-ascending platforms that wrap around the famous landmark. Although they lack the brilliant color of SNES games, the drab shades set the tone of game.”
DigitPress

“With two characters, the gameplay is pretty nice. However, the jumping scheme seems to have taken a step backward, since the characters jump just like their NES ancestors. Still, the characters’ signature moves (the Whip Swinging and the Spear PoleVault) are a nice addition. Other than those, there aren’t really any new moves, but the SubWeapons are somewhat different than their old versions, which is certainly a breath of fresh air.”
Inverted Castlevania Dungeon 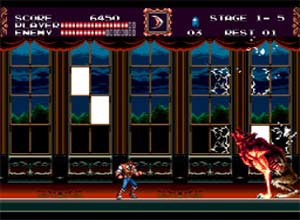 “There’s seemingly no shortage of danger anywhere in the game. Your enemies are formidable when scattered about the awe-inspiring landscapes, but the real stars are the bosses and mini-bosses, challenging you to figure out their patterns and secrets as they mop the floor with you several times over. Though their patterns are clever and puzzling at first, soon the difficulty is gone; after a few passes through the game you can read these once intimidating beasts like the back of your hand. Do realize that this means that you have to beat them more than a few times, and for the novice player this is easier said than done. To take your mind off of getting slaughtered, the bosses are incredible: level one’s mini-boss is a fire-breathing zombie dog that shatters the background windows with a shriek, showering broken glass onto your would-be vampire killer. Drac returns with several new attack patterns, as do fan favorites Medusa and Death.”
hangedman @ GameFAQs

“Yes, there’s only six levels, but they tend to be on the long side, and, unlike other Castlevania games, you only get two continues to get through all of them! I find the password feature rather unnecessary, since the game isn’t very long, but it’s there if you need it. The game has selectable difficulty levels that are fairly well balanced. The Easy mode is good 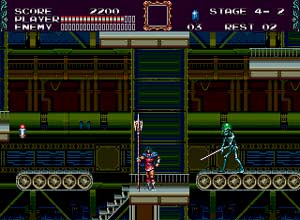 for most players, while the Normal and Expert modes (the latter becoming available after beating the game on Normal) will provide a decent challenge for veterans.”
Hardcore Gaming 101

“You have to hand it to Konami. The music in this game is very good even for Genesis Sythn. I must say that Bloodline’s music really blew me away. If you’ve played Circle of the Moon on Gameboy Advance, you will also notice that the Stage 2 from Bloodlines was redone for Circle of the Moon. The sound effects are pretty average Castlevania noises such as howls, shrieks, clashes, bashes, and whipping noises.”
Genjuro Kibagami @ GameFAQs

Little known fact about Castlevania: Bloodlines that I myself did not discover untill a few months ago!
There is a password that you can enter that plays one of three classic Castlevania tunes after you power up your weapon to full power!!!
Let me tell you something, hearing Bloody Tears, Vampire Killer or Beginings kick in is just about the raddest thing that you can imagine!!
Just set the sound to 73, and the music to 5. Then play both and start the game.
~alpha jammer

Besides, you have to play this game just to see Dracula shoot fire out of his crotch in his final form.

I duuno, Bloodlines had a busted story (that ruined Castlevania’s continuity) and some really stupid enemy designs. It has some weird stuff like collecting diamons instead of hearts, like it was made by people who didn’t look very hard at the other games. It was also far too short (CV3 has 50 levels, and this has six of about the same length), and graphics far below CV4 and Rondo of Blood.

Why don’t you use a quote from this Castlevania History article:

“Overall, it’s a great Mega Drive game, but because of the step down in system power, it still pales in comparison to Super Castlevania IV and Dracula X. If this game had come out between Dracula’s Curse and the SNES game, it would have been a great step between the two. As it is, it was the second step back in a row, and while not a sales disaster, The New Generation was bad PR for the series.”

The enemies in Bloodlines were more similar to those in other Castlevania games. The flying horse heads are bad enough, but Paula Abghour and Fred Askare (sp?) were just lame.

I have no gripes about the jumping controls, as it’s more realistic to not have full control over the jumps. My only real gripe with Bloodlines is with the subweapons, as they’re just boring to use.

I’m surprised this even qualifies as a castlevania game. If you compare it the pc engines “Akumajou Dracula X” in terms of visuals in sound- its a joke. Its also the most non canon game in the series with completely forgettable characters and plot, but I suppose sega really wanted a castlevania game on their console at the time.

Hell…some of the music on Castlevania 3 is better than Bloodline’s…actually most of it is.

Better than SC4 in everyway except sound it seems. But… better gameplay, better graphics and lots of gore..something snes fanboys could never really handle lol