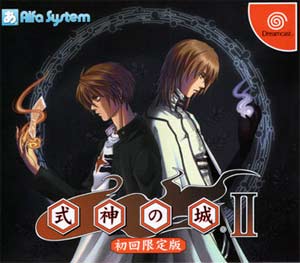 Castle of Shikigami 2 (also known as Shikigami No Shiro II) naturally originated in the arcades and was later ported to the Sega Dreamcast (in the series of late shmups that kept the DC import scene alive), Playstation 2, Nintendo GameCube, and Xbox. The game was released in Japan for each of those mediums and was later brought to the States on PlayStation 2 by XS Games (as Castle Shikigami 2).

In addition to some fairly slick 2D shmup graphics, Shikigami 2 features a rather unique scoring device known as Tension Battle System (TBS). Your score multiplier increases the closer you are to an enemy or bullet. Therefore, to get the highest scores, you must destroy enemies while brushing up near an enemy bullet or enemy (Think of it as Crazy Taxi meets shmups). To compensate for putting your character in harm’s way, your character’s shot power and shot pattern are enhanced while you are close to your enemies and their bullets.

While the original, import Dreamcast version still fetches a fairly high price, the budget PS2 version retailed for only $10 in the US.

Review Tidbits:
“Shooters come in many styles today and Shikigami 2 falls squarely under the “bullet hell” genus. Bullet hell shooters typically throw tons of firepower about the screen, much of which simply creates pretty patterns rather than threatening the player, but compensate for the bullet density by making the part of the player that can be hit smaller than the actual character graphic. Many also throw in a bonus for gamers who fly close to bullets, and Castle Shikigami 2 takes that idea and runs with it. The closer you are to a bullet or enemy the higher the score multiplier goes, up to 8x, and if you get really close your main shot gets ridiculously powerful. This all ties in with strategies on seriously maximizing score, but more on that later.”
Got Next

“The ride is certainly pleasing to the senses. At first glance, Castle Shikigami 2 looks like any other old school vertical scrolling shmup–with ship sprites and bullets overlaid over scrolling backdrops. Look closer though and you’ll see that those cities and forests aren’t hand drawn, but are instead photorealistic concoctions ma 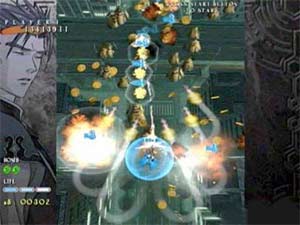 de from polygons and high-resolution image elements. You’ll also notice a free flowing river in one level, and moving car traffic on a freeway in another. Meanwhile, the ship sprites and bullets are made out of 2D and 3D elements, but the kicker there is that they’re also highly animated. Your own character’s arms and legs will kick out and sway as you shoot and fly around, and enemies will twirl around and show off their little flaps and engines as they try and catch up with you. There’s some slow down here and there, but that’s understandable given how many bullets are often on screen. Not bad for a 3D shooter designed for old Naomi/Dreamcast hardware.”
PSXextreme

“Once you’ve finished laughing at the utterly emotionless voice acting and butchered dialogue, you’ll find that Castle Shikigami 2 offers plenty of variety when it comes to its several heroes. As Kuga flies through Tokyo’s skyline, he can launch an entire row of energy spikes into his hapless foes. Should you give Hyuga or Kim De John a try, you’ll find that their double helix and crisscrossing triple-beam attacks can overwhelm even the toughest of foes. That’s not even mentioning the absurd amount of throwing stars, tarot cards, electrical charges, icy spears, watery ovals, and other absurd stuff that can be used to blow up the legions of robotic flunkies that get in your way. You’ll find that each character’s skills and overall power drastically differ from one another, allowing you to choose from a decent variety of combat styles.”
Thunderbolt Games

“Castle Shikigami 2’s music is jazzy and cheesy, but fits the action and mood of the game well. The sound effects are also decent enough and get the job done. The voice-overs, however, are simply awful. Couple that with the aforementioned bad translation, and you have many moments of cringing ahead. But considering the low selling price [for the PS2 version], there probably wasn’t a huge budget for bringing this title over, so it’s forgivable.”
MyGamer 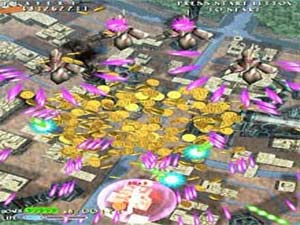 “Castle Shikigami 2 offers a wealth of different options for a shoot-’em-up. The main story mode is divided up into five fairly big levels, each with multiple stages and bosses. Even if you set the difficulty to very easy, you’re not going to reach the end without a lot of practice, and even once you do, you’ve still got all those other characters to try out. There’s also a boss battle mode that strips away all the regular enemies and other challenges in the levels, letting you take on each main opponent in the game in sequence, with just one life. And, for helping you get through those tougher parts, there’s a practice mode that lets you try your hand at every part of every stage, as long as you’ve successfully fought past it in the main mode. There’s even an extreme option for the main arcade mode, which fills the screen with even more dangers, as if the difficulty weren’t significant enough to begin with.”
GameSpot

I downloaded (… I know, I’d love to be able to buy the original. I can’t) this game a couple of months ago, Dreamcast version.

I think it’s really well made, and I liked it overall, but, then again, I’m not that good when it comes to bullet hell.

There’s a review of the PAL (UK) version here: http://www.gamesasylum.com/showarticle.php?articleID=4490

In Europe it was released by Play It under the name of Castle Shikigami II: War of the Worlds.

You can get all three Shikigami no Shiro games for the PC. I DL’ed them off of Underground Gamer.