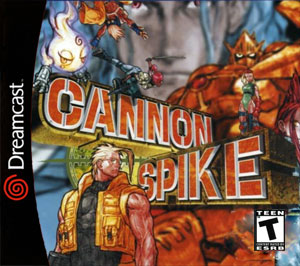 The Dreamcast game library is filled with tons of 2D shooters, but if you enjoy blowing stuff up, but would like a bit of variety from the standard vertical or horizontal scrolling shmup, with a bit of Street Fighter (and other Capcom) fan-service thrown in, you definately need to look into Cannon Spike.

The easiest comparison in terms of gameplay to Cannon Spike is the Smash TV series.  Your character goes from room to room  roaming around the area to blow stuff up most effectively.

Instead of the 2D sprites that Capcom is known for on the Dreamcast, Cannon Spike uses beautiful 3D models set in a 2D perspective.

The game isn’t especially long, but it is a fun filled experience that is worth every minutes you invest in it.

Hardcore Gaming 101
“The interesting thing about the game is its setup. It can be easily described as a shoot em up mixed with Contra for good measure. It’s over head, one screen look gives it a Powerstone feel to it. While not creative by any means, it gets the job done by being a fast paced shooter. And it’s rather hard too. Not so much because of the enemies AI (which at times you wonder if it even exist) but for the sheer amount of fire power that they have and a total lack of reaction to your attacks….The game is set up much like Alien Solider, in where that the game is pretty much one boss battle after another. At the start of each stage you have to battle waves of terrorist which usually consist of either humans with weapons, robots, or robots with weapons. All enemies are typically the same, with being able to usually just shoot out tiny bullets or land a punch if they’re close enough. Once you have defeated every enemy, a midboss accompanied by with more enemies comes along to wreak more havoc. The midbosses tend to be much more massive although sometimes not so much and they range from a helicopter to a zombie gorilla. Once you defeat this wave, the actually boss of the level will attack you with the possibility of having minions with him/her. These bosses are the games challenge as they tend to shoot many bullets for you to avoid much like a shmups. There are a few instances where they will shoot at you that is reminiscent of a bullet hell feeling, as with many Psikyo games, with all the projectiles coming in at you. ” 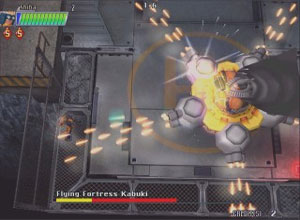 GameSpot
“Cannon Spike is a cavalcade of classic Capcom characters. Included are Mega Man, Charlie and Cammy from Street Fighter, Darkstalkers’ B. B. Hood, and even the venerable Arthur of Ghosts ‘N Goblins fame. Joining the cast are two original characters named Shiba and Simone. All of the characters’ attacks are different, but they follow a standard model. There’s one normal, rapid fire shot; one more powerful shot; two up-close melee attacks that do a lot of damage; and one limited use special attack. The attacks are different enough that all the characters are fully worth trying out. For example, Cammy’s standard attack is a double shot, Arthur’s powerful shot is composed of heat seeking missiles, and Mega Man’s strongest melee move utilizes one of his old NES attacks (a tornado). The variety of offense, combined with differences in speed and maneuverability, makes replaying Cannon Spike an appealing prospect.

That’s not to say that Cannon Spike is particularly replayable to begin with. On the contrary, the game was ported straight from the arcade, and as such it’s very, very short. Its ten tiny levels are presented from an overhead perspective and always stay focused on the same small background. There’s no scrolling involved at all; rather, the enemies simply come to you in waves. After dispatching several types of enemies on a particular level, you’ll be transported to a new scene to face that level’s boss. The boss fights are literally almost half of the game, and fortunately they’re also pretty intense. As a bonus, the bosses feature some of the most amusing Japanese-style English names ever. Who could forget Bio Gorilla Bloody or the unstoppable Ken Brown?” 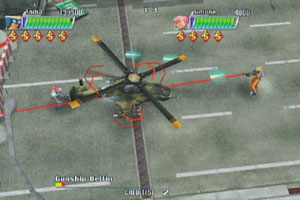 “The game builds you up slowly, so for the first initial three or four levels, you will be thinking it’s a breeze. Then, from nowhere, a swarm of enemies will come out of the woodwork. This is definitely a good example of “twitch” gaming. And despite what you think, you never really get bored with this same blasting action because you really don’t have time to be thinking of such things.

The game is also visually solid, though with Capcom at the helm, this shouldn’t even be an issue. It’s delightful to have characters from other Capcom games (i.e. Mega Man, Charlie, Cammy, etc.) appear here, and the character models are the quality we come to expect from the Dreamcast. Great special effects -most notable is flame effect from special attacks. And should choose to play this game on a Dreamcast VGA box, you’re going to be in for a real treat.

So, we’ve got a thumbs up for the visuals and five star rating on the gameplay… what could go wrong? Well, as we stated earlier, Cannon Spike came out originally as an arcade game. And the longevity of an arcade depended on how many quarters you could pump into it. With the game at home, even though you’re limited to three credits, it’s only a matter of time before you beat the game within that credit limit. Though the game sports a Gallery mode, there really isn’t a lot to come back for second helpings. It would’ve been nice to see even more extra characters or additional modes. But in the end, Cannon Spike is definitely a great game that, despite lacking longevity, will satisfy those nervous reflex twitches.”

BTW, if you’re a Dreamcast owner, be sure to check out the Dreamcast VGA cable in the Racketboy Store

Actually I dislike this game a lot, it plays like crap, it’s one of those games that can’t really be played without a Xbox like controller (aka 2 analog sticks).

I really loved this game, and even though in hindsight the controls would’ve been much better on a dual-analog setup, it still played well with the dreamcast controller.

Reply
Pingback: PoisonMushroom.Org - Combing the Net So You Don’t Have To » Blog Archive » The Daily ‘Shroom/Points of Interest - 7/3/07

Not liking the lack of sound effects and the quality of what is there.