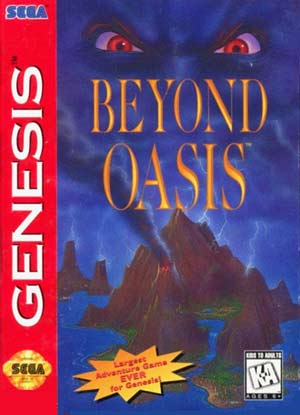 As any classic gaming fan knows, Sega and Nintendo had quite a rivalry in the early days of console gaming. Even though Sega had some great franchises of its own, it was still envious of some of Nintendo’s franchises like Zelda and Metroid.

Near the end of the Genesis’ successful lifespan, Sega attempted to capitalize on the Zelda action RPG formula by releasing Beyond Oasis (also known as “Story of Thor” outside of North America).

Beyond Oasis excelled in pushing the Genny’s audio and visual capbilities to the max and Sega also displayed some innovative thinking in terms of the combat gameplay. Unfortunately, Sega didn’t seem to spend enough time polishing the gameplay and story to make it strong enough to compete against the best RPGs that Nintendo and Squaresoft had to offer.

Additional Note: Sega also followed up with a more impressive sequel on the Sega Saturn known as Legend of Oasis or Story of Thor 2.

Review Tidbits:
Not a whole lot of story here. It has one or two minor “surprises” but overall there isn’t much in the way of plot. Don’t be expecting a complex tapestry of characters and events… A young man named Ali, who enjoys hunting for treasure, stumbles across the magical Gold Armlet on a lonely isle. When he puts it on a spirit tells him he must defend the land of Oasis from the evil Silver Armlet. But first he must find the 4 Spirits of the Gold Armlet. Ali barely escapes from the island before it sinks. When he returns to his home he finds a band of enemies and adventure waiting for him…

A cool gameplay element is the use of the 4 Spirits – Dytto, Efreet, Shade, and Bow. Each of these corresponds to a different element of nature (water, fire, life, and earth) and can be summoned from the various natural things they are related to. (i.e. Dytto can be summoned from Water) You can control the spirits with various uses of the A button, and they each have a set of special techniques that can be used to solve puzzles, help you fight, or protect you.”
Sega-16 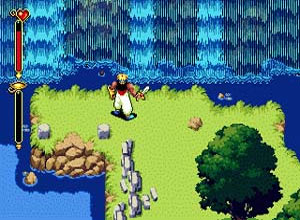 “The number of special moves to perform in Beyond Oasis is very nice, but they get in the way from time to time. You can do the movements easily enough, and it’s not too hard to time your attacks properly, but they get activated in the worst places possible. Pressing back, forward, and then attack will result in a long, powerful back flipping slash, but what happens when you accidentally do this when trying to send out a small forward jab in order to stop an oncoming opponent? You get hit in mid air and miss a perfectly good chance to hurt something. However, most of the time, this problem doesn’t show up leaving you grade-A, top-of-the-line combat controlled comfort, and Control gets a 93%.”
RPGFan

Beyond Oasis is more action than RPG. Sure you get different weapons and items but almost every item either increases HP or MP. The weapons are indistinguishable. I beat the game without ever needing to use anything other than my knife, except when a puzzle required it. Combat is strange, it’s a lot like Streets Of Rage or Golden Axe! Go up to an enemy and keep pressing button B to unleash a series of attacks that ultimately knock them down. There are special moves as well, like a fighting game (two undocumented moves are: Forward, Back, Forward + B and Forward three times + B), which aren’t really necessary at all. After a while you’ll work out a pattern of your own but I found jump attacks to be particularly useful…
Gameplay is very simple. It is basically exploring dungeons, ultimately killing a boss and getting something (be it a spirit, item or endgame). Unfortunately, and this is one of the games biggest flaws, there is not enough variety. The dungeons are all the same, with virtually no difference in graphics or puzzles. They don’t really get any harder (although some puzzles may have you stumped) or complex either, so I literally breezed through the game without ever getting stuck… I didn’t have any trouble with any puzzles, which is to say none kept me guessing more than about 2 minutes. But I am a meticulous gamer, and some of the puzzles were indeed meticulous. Some of the later ones will present a challenge for casual gamers.
RPG Critic 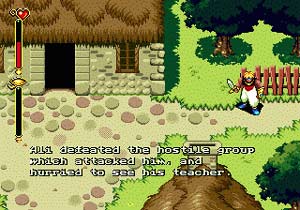 “Visually, Beyond Oasis is breathtaking. It’s easily the Genesis Chrono Trigger equivalent, and possibly even superior to it. The colors are bright, but not overly so, Ali and even the various NPCs are well-detailed and move fluidly. Same with the environments, which look beautiful. The art’s amazing as well, resembling the style of Phantasy Star which is a definite plus. I would have to replay the game focusing on the sound to truly describe it. The best thing to say about it is, as the last sentence should convey, that it’s forgettable. Not necessarily bad, but not anything that you’ll be humming to yourself either. Never gets annoying. ”
NetJak

It’s just a shame that the game is far too easy. (Ali is a complete bad-ass right from the beginning.) Well, unless you want all of those Infinite Weapons. God, I had that racetrack portion…

Oops…I meant to say that I hate that racetrack portion.

A game that I would have liked to see continued on Dreamcast, I actually preferred it over ALTTP.

Just in case anyone didn’t know, this has a sequel of sorts on the Sega Saturn.

This game ought to be remade. They do it with movies all the time.