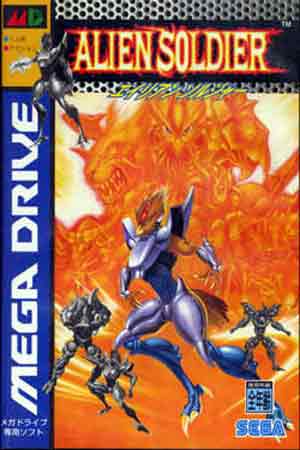 Most Sega Genesis fans remember Gunstar Heroes as the premier run-and-gun shooter from Treasure. Inside the US, this is definately the case, but our friends in Europe and Japan were priveldged to experience a challenging and impressive game by the name of Alien Soldier.

The cartridge is very difficult to find in either region and the boss-laden game will also show you that it is difficult to complete as well.

As usual, Treasure really put a lot of creativity into Alien Soldier’s graphics and animation. The characters are large, extremely detailed and fluidly animated. And as opposed to most other side-scrolling shooters, the levels are notably short and easy before reaching a boss. This results in the game being mostly large boss fights.

Alien Soldier is slated to be included in Japan’s Gunstar Heroes Treasure Box compilation for the PS2 (no US release is announced), but it would be a great title to see available for download on the Nintendo Wii’s Virtual Console — especially in the US.

Review Tidbits:
“Treasure really put a lot of time and imagination into Alien Soldier’s graphics and animation, and it does show. Epsilon is large, extremely detailed and fluidly animated. The enemies are all very detailed (and quite imaginative) – some in particular, like Xi-Tiger, are huge. The backgrounds are also quite detailed, and in fact are some of the best I’ve ever seen on the Mega Drive. Treasure didn’t slouch in the music and sfx department either – several extremely clear voices can be heard throughout the game (a feat thought to be near impossible due to the Genesis’ dated soundchip), there are lots of meaty explosions and the music is on a par with Gunstar Heroes – that is to say excellent. In fact, one of the BGMs in the game, “7th Force”, originally came from Gunstar Heroes. Control doesn’t suffer much either – Epsilon responds almost perfectly to your commands, only occaisonally faltering. This isn’t a major problem at all, as it doesn’t really happen that often, but there are certain tight spots where any faltering can really hurt you. One nice touch that Treasure included was the ability to customize the game’s speed. Is the action a little too hectic for you? Just pause the game and choose what level you’d like it slowed down to. Believe me, this feature comes in handy in several places.”
DigitPress 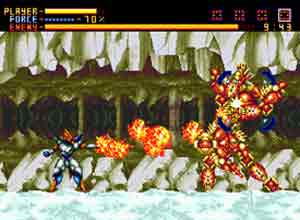 ” The reason this game will appeal to shooter fans is because each of the bosses is totally original, ranging from the weird and organic (I.E. Bleurch) to the funny (The squidgy frog boss) and the evil and robotic (Final boss, scary!!).

From the moment the game begins, you are surrounded, and can’t avoid taking hits, so you need to top up health. This is achieved through the ‘counter’ attack. The counter move creates a tiny vortex in front of you character, which turns any incoming shots into health, thus enabling you to turn the most desperate situation into a sure victory. Yet as the whole game is played against the clock, you have to ration the time you spend absorbing health. ”
SHMUPS!

“Unfortunately, the control can be a downside. Epsilon’s four selected guns run out of ammunition, some faster than others. Having to switch between the weapons mid-fight is a clumsy action, and it usually results in you catching a bullet. Even worse is the fact that the weapon select can’t be done through the pause menu, so you’re struggling with a rotating menu in real-time. Each weapon also recharges at different speeds, so if you’re using four guns with extremely finite ammunition you’ll be fiddling with that menu more than you’re comfortable with….The controls outside of the weapon selection are beautiful, simply put. However, the rest of the gameplay is great as well… 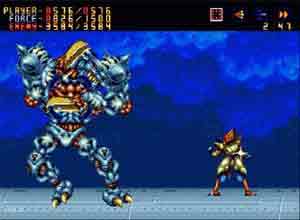 As the lifeblood of any 2d game, Treasure has made some great boss battles. Each boss has a certain strategy in order to be defeated. Though blindly attacking and winging it might yield some satisfactory results, knowing the boss patterns and effective weapons is always a better choice. Some bosses need to be fought multiple times with different weapons before you can figure out their weaknesses. Though Gunstar’s bosses were nasty, these guys are tougher. Thankfully, in any case, trading hits with the boss will cause you to die: skill is ultimately needed to win.”
hangedman @ GameFAQs

“Treasure, the makers of Gunstar Heroes, probably congratulated themselves on a job well done after releasing GH, but they must’ve felt that there was something they could have improved upon. So they went out and removed 90% of the forward-scrolling sections and instead replaced them with tons of different bosses. Thus, the blastfest known as Alien Soldier was born… Your character has a nice arsenal of abilities available to him and they are all put into good use. In addition to moves described earlier, he can blaze through enemies as a fiery phoenix, severly damaging them, perform an another jump while hovering, walk in the ceiling, and choose between 2 fire modes. Generally speaking, playing this game is just plain fun because of the main character’s move arsenal. Nothing like teleporting through a boss that’s just about to charge you and shoot him in the back.”
AnotherGamer & GameFAQs

Found a copy in Australia. Used-looks like a euro/usa game cartridge. Has the indention on the side. Worked on my Pal Mega Drive console and also on my Japan Mega Drive console. Did not work on the USA Sega Genesis. It displayed the region lockout screen. Used a Game Genie code and it worked.
Have pictures to show-could it be a bootleg or a Asian version of somekind. Not too-sure, due to the region lockout on the american system. Could use your insight on this. Feel free to consult via the comment or my Email. Thank you.