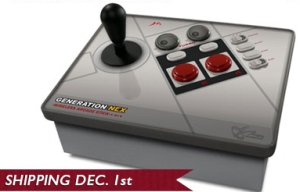 Messiah Entertainment is one of the most innovative manufacturers in the retro gaming marketplace, but they have had their ups and downs.

Their headlining product is the one of the leaders in the NES Clone market. Many classic gamers love the Generation NEX because of its modern styling and its functionality as an alternative to dying NES consoles. Unfortunately, the Generation NEX has also received its complaints about its game compatibility.

In my opinion, however is Messiah’s wireless controllers — both for the NES and SNES are what make them stand out in my mind. I’m a big fan of the flexibility that wireless controllers give and its nice to see a company that hasn’t forgotten the need for older consoles.

Messiah’s latest controller is modelled after the NES’s Advantage Joystick and is also wireless. But here’s the bad part — the Generation NEX Arcade Stick is only for use with its own Generation NEX NES clone as opposed to working with the original NES console like their previous wireless controllers.

In addition to this siginificant issue, the NES isn’t exactly a console that has many arcade games like shooters and fighters that would benefit much from an arcade stick. Add this to the $60 price tag and I would be surprised if these sell very well. My friend, RedWolf over at Vintage Computing and Gaming seems to share many of these same thoughts and has many other great insights.

While I’m glad that Messiah is developing new products and is willing to take risks, I still think they should strongly consider making wireless Saturn and Dreamcast controllers and/or joysticks. As I am well aware from the people that frequent racketboy.com, there is still quite an interest in these Sega consoles and I think they would benefit most from modernized controllers (as long as the layout stays the same).

At one point I heard they were working on a Dreamcast controller. I emailed them about it a few months back but never got a response. I love my DC but hate the controller!

I, too, would like to see some quality wireless Saturn controllers.

I think we should buy some and hack them to work with the Dreamcast.. but oops, only two buttons. 🙂 Maybe we could stick the wireless guts into a dreamcast fighting stick or something.