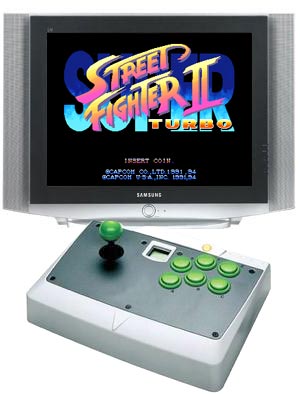 After watching this series of well-produced tutorial clips from David Sirlin (Game designer and producer at Digital Eclipse), I realized I didn’t know nearly as much about Super Street Fighter 2 Turbo as I thought I did.

I have never considered myself an expert at the game even though I have be playing it since its inception, but David’s video illustrations and explanations made me think completely different about how the game is played.

Keep in mind that these videos are very different than fighting masters showing off their combo videos and instantly making you feel inferior. Instead, these tutorial videos actually teach you how to make the most of your player, the space around you, and how to react to your opponents. It almost turns this classic game into a science.

Mr. Sirlin timed these pieces perfectly with the re-release of Super Street Fighter 2 Turbo on the Capcom Classics Collection Volume 2 for the PS2 and XBox (why must they always neglect the Gamecube, especially with new Wii support!), but you can also play an excellent port of the title on the Dreamcast if you can get your hands on a copy.

Thanks to GameSetWatch for the link

You forget, Sirlin & his ilk complained loudly that the DC ports had problems (usually relating to sprite size IIRC) — thus his “arcade-perfect” conversion! 😉

Never heard that before…
Do you have a link to the info?

The tutorial videos have been moved. You can now find them here:

I just stumbled across this article long after it was posted and figured anyone doing the same might want the updated links.