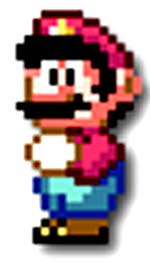 As well as being Nintendo’s mascot Mario is one of the most recognized characters in video game history, appearing in hundreds of games, many of them bestsellers. Mario first appeared in Donkey Kong, and appeared alongside his brother Luigi for the first time in Mario Bros. As of September 2005, over 184 million games featuring Mario have been sold, making it by far the best selling franchise in the history of video games.

NFG Games has a feature the little plumber’s graphical history showing a timeline of sprites. In addition to an entertaining sprite gallery, the feature consists of an informative article that has excepts from Nintendo Official Magazine UK, Sept. ’04 issue.

It’s a shame that we don’t get to see more a more modern sprite for The New Super Mario Bros. for the Nintendo DS. Instead the developers are going with polygons in a 2D environment.

If you would like to check out some more Mario goodness, check out the following links:
Super Mario Mini for PSP – Awesome Homebrew
Preview: New Super Mario Bros. – DS
Howard and Nester Comic Archive
Games That Pushed The Limits – Part 1

Cool. I wish my original NES worked. Or even my SNES..! I miss the original Super Mario Bros.

you could always get a Dreamcast and use an emulator to play any NES game. It’s a ton of fun. My wife loves it 🙂