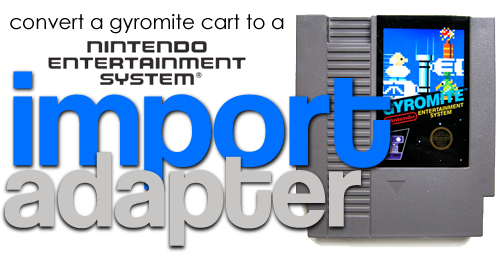 This article is based upon CRTGAMER’s guide on the Racketboy forums indicating how to identify copies of Gyromite for the NES which house an adapter to play Famicom games on the US NES.  Special thanks to CRTGAMER and Ziggy587.

Once in a while the inside of the Gyromite game cart has an NTSC-J Gyromite game PCB with a 60 pin Famicom to 72 pin U.S. NES adapter. While the cart itself is a bit of a novelty, owners can swap the PCB out with other NTSC-J NES PCBs, allowing them a way to play Japanese games on their US systems. 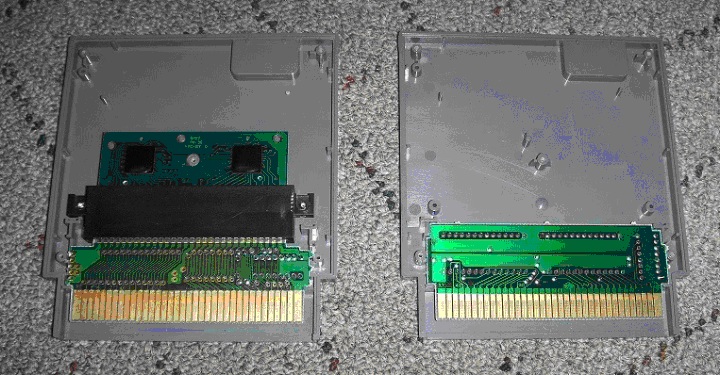 Internals of a cartridge with the adapter and without.

There are several ways to identify whether a copy of Gyromite is the NTSC-U version or the special adapter version.  First, the adapter causes a change in weight, though the difference is only slight, coming in at roughly an ounce.  Normal cartridges weigh around 3.5 ounces, while the adapter version weighs in at about 4.5 oz.  While it’s not a great method for identifying an adapter unless one owns a postal scale, it can be a means to further one’s identification of a cart if it is suspected.  The weight increase also shifts the cartridge’s center of gravity, causing it to balance more towards the center, where the word “CAUTION” at the underline.  Regular carts will tip over at this point, but the adapter-equipped Gyromite will stay balanced.

As Gyromite cartridges have been released in the US, they have undergone some cosmetic changes.  Specifically the image of ROB the Robot in the lower left corner of the game has varied in color between purple and dark blue.  While there is some belief that the dark blue may indicate a cartridge with an adapter, Racketboy.com forum member CRTGAMER has found one in a cart with the ROB icon in purple, proving that this also isn’t a good indicator.

The number of screws on the back of the cartridge can also help indicate whether the cart contains an adapter.  Later NES cartridges feature 3 screws (and eventually 3 security screws) on the back and hinges on the top of the cartridge.  These cartridges did not house the adapter.  But the earliest cartridges from Nintendo were held together by 5 screws and lacked the hinges of the later design.  While it’s not a foolproof method, a 5-screw Gyromite instantly warrants a closer inspection. 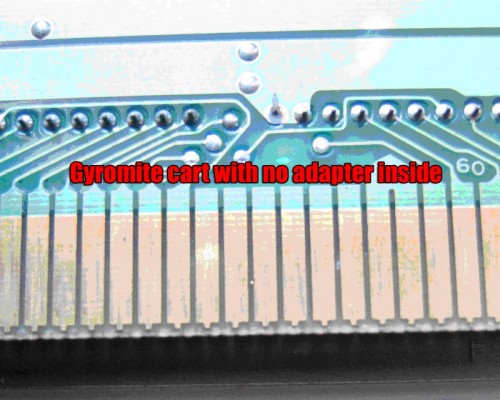 Example of a regular Gyromite PCB 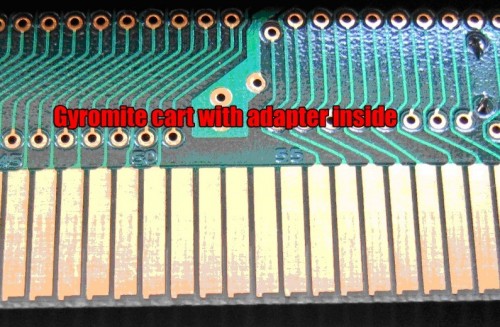 Example of a Gyromite PCB with an adapter

Those looking for the game have reported that any five screw Gyromite cartridge with this style of contacts has an adapter inside.  It should also be noted that regular cartridges have PCB green sealer over the far ends of the contacts, though this may also be difficult to see when the cartridge hasn’t been opened.

Of course the easiest way to tell is to open up the cartridge.  Some members have claimed that certain retro game stores are ok with customers opening up Gyromite carts to identify which ones have adapters.  While your store may be ok with you doing this, make sure to ask before you pull out your screwdriver and start going to town.

Here some quick advice from Ziggy587 on his routine when checking these carts:

This is by far the best way to find a cart with the adapter inside. You won’t look like a weirdo bringing a postal scale into the store or trying to balance it weird. And asking to open up carts might lead to the store owner not wanting to sell the game for its typical price if you find one with an adapter inside. They might even start opening all the carts to try and find the adapters, only to sell them for more money. I say leave them in the dark so we can found these carts in the wild with out any inflated prices.

So when I go into a used game shop, here’s what I do: First, I’ll identify all the 5-screw carts. This is easy to do since they don’t have the hinges. And since most retro game shops store their NES carts with the top side of the label facing you, it’s easy to look through a wall or bin of NES games and find all the 5-screw carts. I’ll take a look at the contacts of each and every 5-screw cart, and if I find one with the tell-tale sign of the contacts, I’ll probably notice the extra weight compared to the other carts I just handled.

No hinges on 5-screw carts

From what I’ve read, and experienced, if you find a 5-screw NES cart and the lines on the contacts are NOT centered, then 100% of the time it has an adapter inside. This is not limited to just Gyromite carts, but any 5 screw cart that was a launch game (although I believe the Gyromites carts with adapters are more common).”

For some additional information on the topic, here’s an article by Benj Edwards at Vintage Computing talking about the differences

“It’s not a myth if it’s true. Yes, Mario, there might be a Famicom to NES adapter in your copy of Gyromite. In fact, there might be an adapter in other early NES games, but so far, Gyromite is the only game cart I have personally found adapters in.”
-Benj Edwards

Stack-Up is another early NES release title which has a solid chance of containing an adapter.  This entry from the blog ∆ + 0 / 9 discusses it

“When Nintendo released Stack-Up and Gyromite for America, they were in hurry to sell American systems, so they didn’t manufactured independently NES cartridges, and put these 60 to 72 pin converters inside the NES cartridges. Some other games had these converters too, but the chance to find one is smaller than in Stack-Up cartridges.”
-∆ + 0 / 9

And here’s more information on which carts may contain the NES converter from Famicom World:

Once again, thanks to CRTGAMER and Ziggy587.  Feel free to check out the original forum thread

I will never be able to look at a gyromite cart at the store again without checking now.

Yeah, whenever I go to my local Play N Trade I take a look at every 5 screw cart. I only got lucky the one time, but I don’t go very often.

nice guide. The only converter ive found personally was in a copy of a 31-in-1 multicart bootleg. Even the label was just a standard famicom size one flipped on its side. it looked like this one, but in a standard NES sized cart. http://gbatemp.net/t261845-famicom-31-in-1-pirate-cartridge

Special thanks to Ack and Ziggy, who both added great info in this Guide. I mentioned the R.O.B. color icon label may not be a 100% accurate determination. Back at the original thread are screenshots to compare the two color label types.

Please feel free to add to the Original Thread that is linked at the bottom of the above article. I’ll keep the OP updated with any new information posted there.

I found one just a couple months ago at a yard sale for fifty cents! 🙂

Wow, I would have never guessed that Gyromite could be so useful. Definitely hitting up the flea market this weekend to see if I can find one of these

These are not as common as people seem to think!
While working at a game store in NY I went through over 400 loose NES 5 screw games. Sticking mainly to the original “Black Box” releases..and out of over 400 I found 3! Not very good odds there.

I see a lot of people using the cropped version of this pic I made about 15 years ago. So here’s the uncropped original. 😛
http://www.videogameobsession.com/videogame/NES-StackUp2.jpg

Thanks! I added your pic back at the OP in the forum.

Someone needs to replicate this adapter before the price of Gyromite carts start to boost up in price!

“From what I’ve read, and experienced, if you find a 5-screw NES cart and the lines on the contacts are NOT centered, then 100% of the time it has an adapter inside.”

THIS IS ONLY TRUE FOR BLACK BOX CARTRIDGES. I found a 5-screw Kid Icarus cartridge with off-center contacts, and it didn’t have an adapter inside. There is no “100%” guarantee if you’re talking about 5-screw carts in general.

The only BB carts I’ve ever found a FC adapter in has been Gyromite and Stack-Up. I would probably only bother with those and possibly Duck Hunt. DH & Gyromite were the original 2 releases to make it into NES Deluxe Sets.

So sweet – I found one today. What’s it worth? I guess as usual – whatever someone is willing to pay. Time to import some JPN carts!

Seriously though I don’t think they are worth all that much. Taking it out of a Stack-Up for instance would actually be reducing it’s value.

Why not just keep it intact and hang on to it knowing you have a special game from 1985?

I am pretty sure the 3rd party converters are pretty common. I used to buy them in 100 packs from
LikSang.com

Very interesting stuff. It makes sense from a manufacturing standpoint – it would have been cheaper to install an adapter and use existing stock if the game hasn’t changed between releases.

I don’t have a Gyromite in my collection yet, but now I want one. Or two.

hey guys, i found a super mario 2 cart in a thrift store, yesterday i decide to play it and relized it was slightly heavier and the connection pins were off to the side like the 2nd diagram. i was hoping if you guys could tell me if the super mario carts with adaptors are common or not

hey i found a mario 2 cart with the adaptor, are mario carts known to have adaptors too or is it rare to find one

They are harder to find then everyone may think. I’ve been looking my ass off for these for about 3 years now. Looked at over 200+ black box carts with no luck. Makes me wonder if more people know about it than I originally thought.

I have a Gyromite Nintendo game. It has five screws in the back.
What is it worth?