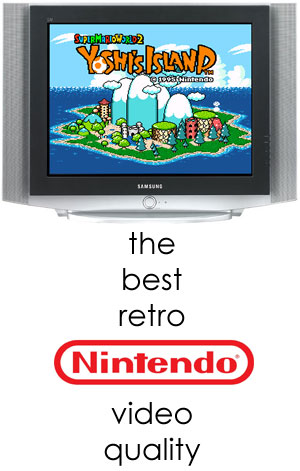 With big High-Definition TVs becoming more common in people’s gaming setups, a retro gamer needs to make the most of their classic consoles to make them shine.

Getting older machines to look good on a modern display, but the Super Nintendo can actually put out some respectable video for a console its age.

Ditch The RF Adapter
I would guess that most SNES owners still only have a lousy RF adapter for video. This may have been acceptable when we were playing Super Nintendo games on a small TV in our bedrooms, but now we need to step it up a notch. Otherwise, you will be left with a lifeless, relatively blurry picture.

Composite Video For Midrange Quality
The next step up in quality is a Composite video connection. The composite (aka RCA) connection is probably the most common connection on any TV today. It will provide a much cleaner picture over RF and will work on almost any TV.
SNES Composite AV Cables

S-Video Is The Best Bet For Sharper Images
If you want to have sharper text and more vivid colors, you should definitely take a look at getting an S-Video Cable. Just make sure you TV has an S-Video connection. (But almost any decent TV made in the last decade will have one)
SNES S-Video Cables

PAL Consoles Can Do RGB
Ok, I don’t know much about PAL electronics and SCART, but I do know that an RGB connection is even better than S-Video if you can pull it off. I welcome any RGB experts to help me out on this, but if you get a good SCART cable, you can bring full RGB to your TV. As far as i know, you can’t really pull this off easily in the USA, nor do our TVs natively support it.

For those of you with PAL sets, lordofduct mentioned in the forums that you need to be careful about buying the right SCART cables… “One big reason we never got this great little device is that it can carry any signal (other then component), this sounds great until you notice it means it can carry any signal, but doesn’t have to carry all. So make sure you pick up the RGB SCART cables and also make sure you have an RGB SCART TV. Also don’t buy SCART cables from certain parts of Asia. They have a cable that looks like SCART, but actually uses a different pin out and isn’t SCART… it can fry your SCART port on your TV if you use it.”

Note On The SNES 2…
On a side note, if you have one of the late-model Super Nintendo (known as the SNES 2) the machine will not support S-Video or RGB natively. There are some hacks to get the console to do your bidding, however, if you feel ambitious.
Adding RGB To An SNES 2
Adding S-Video To An SNES 2

To be honest i have always thought that the quality of PAL tv is pretty good, we don’t get any of the nastynesses you NTSC people get, hense the “Perfect At Last” nickname pal has gotten with regards to its colour. only problem is the interlacing really >_<

While I appreciate your concern, it is not biased when it is all based on well-known facts about video connection quality. I’m not just making this up. I guess the only thing that would be questionable would be the wording, but heaven forbid I make one of my posts anything more that dry and boring facts.

I have provided links to our forum discussion where we all discussed what works out best along with a reputable third-party link that discusses video quality in detail with graphical examples. That should help clear up the possibility of bias.

Also, I would assume that it would be pretty obvious to most people that I am selling the items.

If I was getting paid to products from other companies and not disclosing that, I could understand the issue.

oh and gord, I did mention that the RGB connection on PAL TVs are superior. We just don’t have that option here in the US.

anonymous, what you aren’t realizing is that most people fail to understand the concept of using higher-quality connections. Hell, my roommate runs every one of his game consoles on whatever type of connection that they came with. I, on the other hand, upgrade all of my connections to the best possible.

RF on a plasma looks like crap, and it’s a shame that more people don’t understand this. racketboy, keep up the good work.

It’s probably also worth mentioning that whatever cabling you’re using will typically pass a cleaner picture if it’s well shielded.

This is especially important for people who have multi-system setups with many cable runs near each other. Cheaper cables can pick up interference very easily.

So it’s not just the interface you choose, but the cable’s quality as well that should be considered.

I recently bought a 40″ Samsung LCD TV (N8) and after trying to plug my SNES in the picture is very jumpy, and seems to flicker the whole time. ive got a RCA connector for it, and i saw somewhere that hooking the SNES to a video first, then run that to your TV should fix it, but to no avail. Any ideas how to fix this? would a S-Video cable fix it? Unfortunately i dont have a CRT tv to play on anymore, so i dont know what to do!!!

I have an Olevia LCD tv and when I hook up my SNES to it, it looks ok, but it has a few milliseconds delay…when I hit the button it takes about that long for a response. I’m pretty sure this has something to do with converting analogue to digital. Will S-video solve this, do you think?

Probably not as it’s still an analog signal….

Some people don’t like the filtering (HQ4s, super eagle etc.) in that case some emulators (zsnes) offer a way to simulate the artifacts of NTSC or PAL equipment if you miss the lo-fi feel of the 90s! (you can even tweak it to match whatever equipment you had… and the best thing is that you can put your old collection in a nice display without having to bother with plugging/unplugging the precious original hardware when you want to play it!

um, I’m using S-video on a non modded SNES 2 right now…I’m not sure where all this “SNES 2 doesn’t do Svideo” comes from. Unless it’s actually showing Composite through the svideo

@Jon, where can I buy a “double shielded” S-Video cable for my NTSC SNES? It’s an imported SNES (I am in England). I have faint diagonal lines / herringbone pattern on colors on my IN76 projector only on my SNES picture via S Video. My pj won’t lock onto the RGB SCART image from my SNES, only the RGB SCART picture from my Pioneer HDD / DVD recorder LX60D. I need a new cable to eliminate the diagonal cross hatch patterns! Help!

I’ve compared both composite and RF on my Samsung 40″ LED TV. There was barely any difference between the two. Composite won because the colors were slightly better. There was a huge difference on old tube TVs, but I guess it’s not as big a deal on HD now.

Really? I think you’d see more of a difference between Composite and S-Video though — the color will be more vibrant and the detail will be sharper.

I would think I’d have the option of using an RGB cable on my SNES as a PAL gamer, but the SNES I have just fades to black after a few seconds. Now, I have an S-Video cable; but I also have an old CRT TV that is just better for vintage consoles BUT it doesn’t have an S-Video connection.
What is my best option from here on out? (without having to mod any cables and such)

NTSC SNES consoles can make use of RGB scart cables, but the cable needed to be modified for the differences in the NTSC SNES console. The difference is that PAL cables have a 75 ohm resistors on the R, G and B lines while the NTSC needs 220uF capacitors on each line or the picture would be too dark. Also on the Multi-Out port the NTSC SNES does not output 12 volts on pin 3.

What alot of people in the US did with scart is using the scart to tap into the RGB signal and connect this to a video upscaler (which varies from $50 to $450 depending on the type and model) or connect the SNES to a PVM monitor via Scart to BNC adapters.