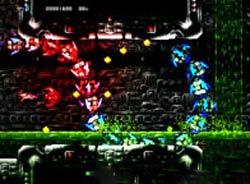 While SNK may have finally fininshed supporting the Neo-Geo, there are still independant developers that have worked on Last Hope, an ambititous new 2D shooter that has the Neo-Geo community quite interested.

So far, the game has only been released as a very limited edition and expensive Neo-Geo cartridge (a Neo-Geo CD and Dreamcast version will follow). There is a review availible for Last Hope, however it is only availible in German. I ran the review through a translator, but the resulting text is still a little difficult to make out. You can read the original German review at DaddelKingz (thanks to ShootTheCore for the link)

The game seems to be a quality piece of work and the site gave the game 4 out of 5 stars. As I figured from the screenshots and video that was released earlier, Lost Hope is a cross between R-Type and Gradius with the style of another Neo-Geo shooter, Pulstar. All of the graphics and sound effects on Last Hope are completely original and it looks like a professional game.

Info and Screens of Last Hope

This is a cool deal. I’m a cheapie and have yet to pay more than $60 for a Neo Geo MVS (arcade) game (Waku Waku 7, Shock Troopers 2) so I won’t be getting this one anytime soon.. I think they are asking about $700. I have no doubt that at that number they still are pretty much pretty the cost of their time near $0.. but its still a lot of money.

I love shooters, but why on god’s earth would anyone make one for the neogeo, much less a cartridge based one? That doesnt make much sense, unless they dont care if they make a profit or not. Its like when I see a new dreamcast game, the only people who still play dreamcast are pirates, no one is still running to the store to buy dreamcast stuff.