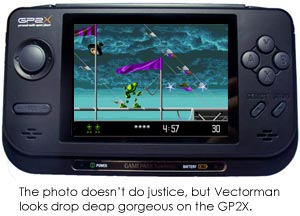 Thanks to the great people over at gp2xstore.com, I have a new gadget to play with (and I will be playing with it a LOT). The GP2X is basically a Dreamcast (with its great homebrew scene) in a PSP shell.

I have known about the GP2X (and its predecessor, the GP32) and its emulation/media capabilities for quite some time, but have never had the opportunity to actually use one until now.

I’m still waiting for my Sandisk 2GB SD card to come in the mail, so for now I am limited to using the small amount (about 32MB) of internal storage for my gaming needs. Until my extra storage arrives, I will share my thoughts on the device itself and my experiences so far with getting software up and running on it.

Form Factor & Design
When I first picked the GP2X up after pulling it from the box, I was rather surprised how light it was. It doesn’t have much weight at all until you put the two AA batteries in the back.

The size is just about right for adequate comfort, but isn’t too terribly thin. The battery area in the back gives it a little bulk and prevents it from being easy to store in your pocket. Keep in mind, a bit of thickness is nice for a handheld for long gaming sessions. Your hands will cramp up much quicker on a device that is especially thin.

If you like the glossy black look of the PSP, you should feel right at home with the GP2X. It isn’t quite as “sleek” as the PSP, but I actually like the style of the GP2X better as it is more practical and comfortable. In my opinion the PSPs design is geared more towards looking nice and impressing your friends.

As with the PSP (and probably the dark-colored DS Lites), the GP2X is prone to fingerprinting. It is a challenge to keep the thing looking flawless in the light as fingerprints show up on the glossy finish extremely easy. It’s not as noticeable on my white DS Lite. 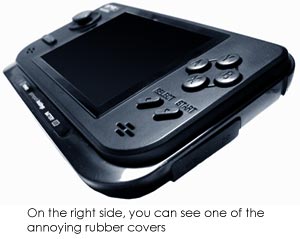 My main complaint about the design of the unit’s body isn’t anything deal-breaking, but rather are slight annoyances and something that can be taken as a “wishlist” for the “GP3X”. The handheld has little rubber stoppers for all input and output ports on the machine like the headphone jack, USB port, and such. This annoys me for a few reasons…

I could just rip them all off, but then everything still isn’t flush down the edges of the system and I also feel guilty for “damaging” such a beautiful piece of machinery. I just can’t win.

The Screen
Ok, back to praising the GP2X… The screen is simply stunning. The default brightness seems on par with my DS Lite, but I have yet to do a side-by-side comparison. Colors are all brilliant and I look forward to playing my old Genesis games on it just to see how great they look on the handheld.

As great as the two screens are on the DS Lite, each individual screen is rather small by today’s standards. I am occasionally jealous of the PSP and how good some old-school games look on it. At the same time, I haven’t been a big fan of the PSP’s “widescreen” layout (just like the fact that I would rather not buy a widescreen TV) since emulators and most ports of older games are all stretched out.

The GP2X, on the other hand, gets everything right with its screen. Basically every aspect I like about the screens of both the DS Lite and the PSP is incorporated into the GP2X, leaving me with a screen I don’t really have any complaints about. (A dimming dial would be nice, I guess)

The Controls
The GP2X has what I consider to be the most comfortable controls of all the handhelds I have used (other than stylus-only games on the DS). New newest version of the D-pad (which I’m not sure if it is actually analog or just looks like one) is quite comfortable and moves around well. The four buttons on the right side of the console are some of my favorite among those handheld lineup as well. While the DS Lite buttons look nice, they are actually quite uncomfortable and stiff. The GP2X seems more like the original Gameboy Advance buttons that I like. I haven’t had to use the trigger buttons much yet, but they seem like they aren’t easily reachable most of the time. While I like it better than the ones on the GBA SP, they don’t seem quite as comfortable as the original GBA.

My only complaints button-wise is the volume buttons. It has a up and down volume button below the D-pad that reminds me of the volume controls on my Dell laptop at work. I prefer the volume dial on my GBA. Not only is the dial more intuitive and responsive, but I like having it on the side of the unit instead of on the face of the unit.

The Speakers
I do think that Gamepark Holdings cheaped out on the speaker capabilities. They probably wanted to make sure the most important things like CPU speed and the screen were top notch and cut corners on the speakers. This isn’t a huge deal to me personally since I use my headphones for portable gaming most of the time, but some people may be disappointed.

Also, maybe its just my imagination, but the volume control doesn’t seem to make much of a difference when using the speakers. I can tell a difference when wearing headphones, but I can’t seem to turn the volume all the way down (mute) and it takes me numerous presses of the “up” button to hear it get much louder. (And it doesn’t get very loud)

Overall, you will probably notice the speaker quality as the most common disappointment listed in reviews of the system, but luckily it isn’t a huge issue to me. 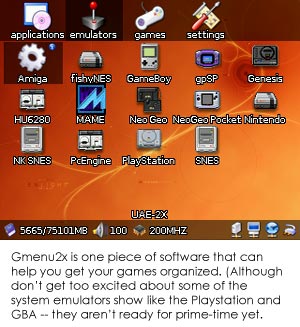 The Software
Again, I haven’t been able to test everything just yet as I need more storage before I go testing the video and music capabilities, but I’ve heard good things.

Overall, the interface is pleasing and works fairly well. Navigating to your installed emulators and games isn’t friendly enough for non-techie people since its much like navigating through a small version of Windows Explorer. I’ve seen some software add-ons that let you customize the interface and make it a little easier to move around and launch your favorite games and apps.

Installing new software is pretty easy for the most part. Most games and emulators just require you to copy a folder over to your SD card or internal memory and then run the app. I got my Genesis emulator and a few homebrew games running in no time.

However, I tried two different NES emulators numerous times and never got them to work. One kept telling me it “could not access the folder” which I could not figure out. I tried a bunch of different things and verified that my program and ROMs folder was in the right place (at least I’m pretty sure) and wasn’t write-protected and it still won’t run.

I still have to get used to a few things, but my experience has been pretty nice. I look forward to see what the homebrew community has in store as things are still a bit rough, but the scene really has a lot of promise.

The Community
Much like the Sega Dreamcast, the GP2X has a loyal following and has very good software support since no modifications are necessary to run homebrew software. However, since the Dreamcast is much cheaper now on the aftermarket, the cost of entry is much lower and more people are using the software.

Having this low cost of entry is both good and bad for the community. The negative aspect is that you have slightly fewer homebrew users which leads to less motivation for developers. On the other hand, the higher price keeps the kiddies and newbies out which results in less bickering and more appreciation for the hard work that the community has put in.

Overall
I can’t help but recommend the GP2X to anyone that has some spare cash and wants a portable emulation system. As opposed to the PSP and DS that either need expensive add-ons or constant hacks to get homebrew to run, the GP2X is an affordable solution that is easy to get stuff up and running on.

While I found some minor annoyances, Gamepark Holdings should be proud of this great handheld. I can honestly say that my DS Lite is feeling quite neglected and the GP2X will definately be getting a good share of playtime on the go and at my office (during lunch break, of course).

I plan on following up on this with more in-depth reviews and emulation guides in addition to more of my own pictures in the near future.

An excellent, albeit tempting, post. Just a question though… When you say a Dreamcast in a PSP shell, do you actually mean the GP2x is actually as powerful as a Dreamcast? In 3d too?

I was referring more to the homebrew capabilities.

If you want 3D games on the go, you should stick with the DS or PSP.

I wouldn’t want to go with only a DS or only a GP2X, but between the two, I am as happy as can be.

Ah, I see… Thanks for clearing things up! I’m as happy as can be too 😛

How fast is the emulation for mame? Is it possible to play cps-2 and neo geo games at a good framerate?

I can say, I own a GP2X and thoroughly enjoy it. I actually bought a PSP in anticipation of being able to emulate on it, and then I found out how crappy the scene was, and how Sony clamped down every chance they got. The GP2X is like an open, free PSP, with games that are good and matter.

But GNGeo is probably the best thing I have ever seen on a handheld, and the stick is fantastic for the SNK fighters.

To Anonymous: The GP2X has excellent Neo Geo emulation, and MAME is constantly being updated with CPS2 games, as well as others. They all play fantastically. The only reasonable retro platform that isn’t very well emulated is the GBA and the SNES, but both are playable at alright framerates if you overclock. And those platforms are being worked on all the time, so it won’t be long. Everything else, NES, Genesis, Master System, Gameboy, TG16, Neo Geo, Neo Geo Pocket Color, Arcade classics, and C64, among many others, are completely fullspeed and playable.

Thanks for the answers! Interesting to hear a comparison of the psp and gp2x.

Too bad it doesn’t have a right thumbstick but I can forgive it because it’s not really aimed at 3D gaming anyway.
Something that I can’t accept from the old PSP and even the more recent 3DS. How are you supposed to properly play any FPS ?!
In my opinion you can’t call yourself a 3D handheld wilthout having a right thumbstick. I would even trade in the left thumbstick for it.