In their hardware days, Sega was always known for being ahead of their time. The Dreamcast Keyboard and Dreamcast Mouse are interesting example sof thinking outside of normal console gaming protocol in order to bring Sega fans the best console experience possible.

Like many of Sega’s quirky peripherals, there aren’t a whole lot of uses for them. But the Keyboard and Mouse actually have a few tricks up their sleeves. 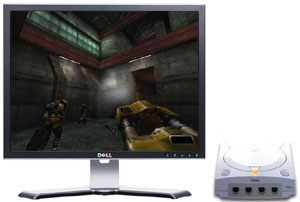 Fans of the FPS genre are always complaining that console controls just don’t cut it for shooters when you want quick response time and pin-point accuracy. Usually, these gamers will just stay on their PC to game, but if for some reason they find themselves with nothing but a Dreamcast and a copy of Unreal Tournament, the Dreamcast keyboard (teamed with a mouse) may keep them from going insane.

Just about any other FPS on the Dreamcast like Quake III Arena, Outtrigger, Heavy Metal Geomatrix, and a handful of others (including the leaked Half-Life release) also support the Mouse and Keyboard so you can get you true game on.

The the geekier crowd that wasn’t satisfied with Sega’s web browser, Linux was also an option to turn the Dreamcast into a more PC-like device.

Typing of the Dead 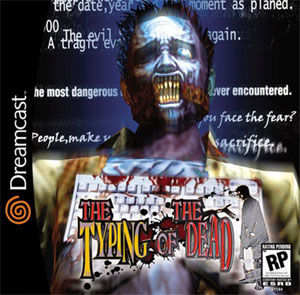 If you ask me, the one game that makes the Dreamcast Keyboard worth owning is Typing of the Dead. Yes, this game from Sega is essentially the light-gun classic House of the Dead 2 but with Keyboards instead of guns. As my friends at Bits, Bytes, Pixels, and Sprites demonstrates, Typing of the Dead is a quirky but fun expedition that shouldn’t be missed by true Dreamcast fans.

There are also some other games that support the Dreamcast keyboard, but I haven’t figured out the purpose behind all of them.

If you have a spare PC mouse and keyboard and don’t want to spend a little extra money for the authentic Dreamcast gear, there are a few third-part adapters that will allow you to use your PC gear on the Dreamcast. Keep in mind, all the ones that I have seen require the older PS/2 keyboards and mice, not the USB ones that are most common now.

^ I was gonna say the same thing.

I have a Dreamcast keyboard, as well as half of the U.S. Dreamcast game library, so I suppose that I should test the keyboard compatibility sometime.

too bad it doesn’t work with chu-chu. the compatability with VO:OT interests me.

I thought it did work with Chu Chu? Pretty sure it also works with Mr. Driller.

Keyboards work surprisingly well with 2D fighters, actually. One of my first fighters was the PC version original Mortal Kombat, and it was quite good with the keyboard.

Typing of the Dead looks very interesting; i’ve got to get a keyboard just to try that. And running Linux on anything is always cool.

Dude you forgot homebrew and emulators!

Quake 1 (Makaqu) using a dreamcast keyboard and mouse is AWESOME as will be ToV when it gets done.

Plus Beneath a Steel Sky (emulated) and other adventure games use the keyboard.

Other homebrew games like Feet of Fury use the keyboard for extra modes as well!

As more and more stuff gets emulated and created people will be glad that they kept their keyboards!

Right now prices are pretty good so if you see a mouse and keyboard around $9 American grab it for future use.

…Plus playing Quake 3 with a standard dreamcast controller is painfull.

And by using there F1-F12 buttons in Phantasy Star Online you can make your character do battle poses and stuff when you are on the ship.

In this way you can totally make other players jealous! And be annoying! And this was YEARS before most modern MMORPGs made their characters dance!

for chu-chu, i was actually talking about the mouse, but i guess it’d be hard to choose which arrow you wanna put down. WHICH IS WHY THEY NEED TO MAKE IT ON DS AND WII!

and with pso, i thought you could do animations with the controller, i could be wrong tho.

where do you get these third party adapters?

4×4 evo has a code that can only be used by typing in the keyboard…it gives you like $999,999 to buy all the trucks and trick them out…really cool. I like your site.

I have always wamted a DC KB/Mouse, but sadly I never got one when I had mine….

I should have never sold it to GameStop back in the day. I am a predominatly PC gamer nowadays, and nothing is better than playing a FPS game via KB/MOUSE. I think I will get me one sometime in the future just to try these old school games on my TV in the livingroom.

I know that DOOM1-2 has beed emulated for the DC with MANY mods! You guys want some homebrew games for the DC? Look no further tham here.

I played Silent Scope last night with my brand new Dreamcast mouse. It’s an absolute dream to play, no need for fumblin’ around with that just a bit too awkward to be precise DC joystick.

What’s a good keyboard adapter? I have one by innovation and it’s horrible

The keyboard adaptors absolutely suck, just get one of the official ones.

PS, I don’t exactly recomend the Japanese laptop-like keyboard, get the big one which says either Dreamcast or SegaNet (or maybe DreamArena).

Don’t forget you can also use BSD and DreamShell.
They are neat little OSes for the DC

i’m pretty sure you can use the american keyboard with the neon genesis evangelion typing games, unless they have american text, not sure how that would work out

Starlancer is chat only sadly that sucks