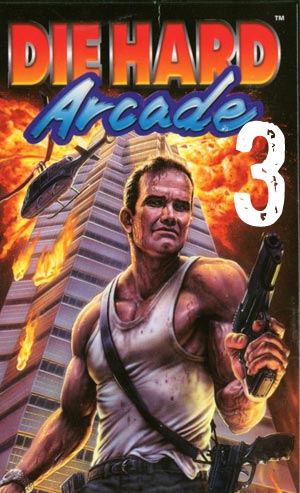 The side-scrolling beat-em-up is still alive. However, you better keep your fingers crossed if you want it to be worth your time.

Even though we were never treated to a Streets of Rage 4, the Sega Saturn was privileged to have an excellent port of Die Hard Arcade (aka Dynamite Deka in Japan) and the Dreamcast also had its not-as-wonderful sequel Dynamite Cop.

Die Hard Arcade, in particular, made one of the best transitions in the brawler genre to the third dimension. While it was neither realistic nor as charming as most of its earlier 2D brethren, Die Hard Arcade was just plain fun to play.

Dynamite Cop left me a little disappointed since it didn’t seem to control as well or have as much energy as the original. However, I was eager to see a preview of the third installment in the series with hope that Sega would bring the brawler back to its potential.

Alex, over at my #1 source for new Japanese arcade game developments, Insomnia.ac, was fortunate enough to take part in an early location test of the game. Like me, he had his hopes rather high when he first headed over to the arcade…

“On the way there I had a lot to think about. A new arcade brawler in 2006? I couldn’t even remember which one was the last one (and I’m still not sure — Demolish Fist, perhaps?) I was reminded of what had happened before the Battle Fantasia loke, when some people were speculating that it would be a brawler (based on the fact that Arc System had only shown four playable characters up to that point), but instead it turned out to be little more than a 2D fighter dressed up in high-res 3D graphics. But there was little doubt that the new DD title would be a proper beat ’em up, since both previous games had been, and that fact alone was enough to fire up my imagination.”

Unfortunately, Alex was a bit underwhelmed by how little had changed since the last installment in the series…

“The facelift is quite subtle, especially if you haven’t played the previous games in years. At first I thought there was no graphical improvement at all, so I went over to Leisure Land, which is only a block away, to take a look at the Dynamite Deka 2 machine 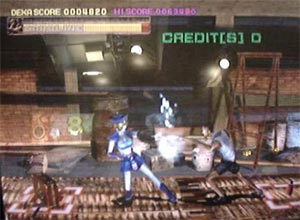 they have there and refresh my memory. Once there I thought, yes, there is an improvement, with the new game featuring more detailed character models, cleaner, higher-res textures, and decent explosions this time round, but the art is just as bad as ever, and overall the graphics would have been a let-down even for a first-generation Naomi title — let alone now. The animation is certainly smoother, but the way enemies react to getting hit is unconvincing, and the action feels stilted and certainly years behind all the recent console beat ’em ups.”

Even though the game still seems a bit shallow, it still looks like it would be some quick arcade fun. Of course it isn’t as deep as most modern games (few beatemups are, after all), but when you are brawler-deprived, you’ll take most anything with fists and decent controls. And even though he seems to downplay the graphical improvements, from what I saw of it via screenshots and video, I do think their is a significant improvement. Of course, its isn’t XBox 360-worthy, but I would say it’s a high-end Dreamcast/low-end Gamecube look.

If you’d like to see the game in action for yourself, here is a streaming version of Insomnia’s video. The high-quality version is available on their page.

Hahahaha…I hope that it gets ported to Dreamcast. It’d be nice to see games other than shmups for new Dreamcast releases. I simply loved Dynamite Cop for Dreamcast, and I’ve been meaning to pick up Die Hard Arcade for Saturn. This looks nice, and I’m curious about the costume feature.

Did anyone else find it a bit odd, however, that the cinematic uses the same voiceover that was used in Dynamite Cop, though? I can’t remember the bad guy’s name at the moment, but I know that he said the exact same thing in the exact same voice about the President’s daughter at one point in the game. Odd.

By the way, after watching a bit of God Hand‘s gameplay footage, I’m kinda tempted to get a PlayStation 2 now. Sadly, it doesn’t appear to have a 2-player mode, though, so there’s still a very good chance that I’ll pass. Still, it looks amazing.

Blimey, this is just about the most surprising new game release from Sega in a long time. I love Dynamite Cop too, and seeing hem make a follow up so many years later, the year I actually got the game. I’m still trying to get my hands on Die Hard Arcade, too.

What’s really odd about this footage though, is how it is just SO similar to Dynamite Cop. I mean, the level seen in that clip has the same exact routes, types of enemies and weapons with the exclusion of the new costume feature, and even near identical cut scenes. It’s almost as if they went into a back up of Dynamite Cop/Deka 2 and just tinkered with it. How odd.