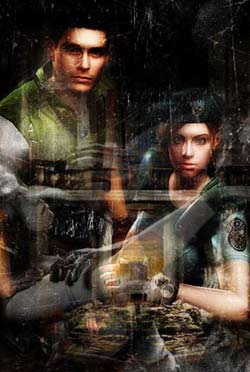 Pretty much everybody knows that the Playstation was built for 3D graphics, while 3D processing was just an afterthought on the Sega Saturn. However, every now and then gamers stumble across an instance where the Saturn holds its own in the 3D department.

Steve’s take on the port situation is “The way I see things, you can either get the last version of RE1 they made for PS1, which is Resident Evil: Director’s Cut – Dual Shock Edition (With the green Greatest Hits tag), or you can get the only version they made for the Saturn, a port of the first version from PS1. I mean if you’re gonna get the game, you might as well get the final version they made for your system, right? I guess that’s debatable, but I’m simplifying this feature to just these 2 versions.”

He played through each version of Resident Evil running on the original console hardware instead of emulation and used S-Video connection on each to ensure accurate comparisons. Many screenshots are provided to make some great graphical comparisons.

Not only does Steve document each RE port’s strengths and weaknesses in technical aspects such as Backgrounds, 3D Models, Textures, Lighting , and Transparency, but he also analyzes gameplay elements such Saving, Costumes, and Replay Value.

So which system came up on top? Well, I guess you’ll have to read the entire article to find out 🙂

Anyway, Steve did an incredible job and I look forward to additional comparisons. My next pick would be comparing the Saturn and Playstation versions of Dead or Alive. There’s quite a debate going their as well.

I’m trying to focus on doing a comparison of a game that came to two consoles, both in USA. It doesn’t seem fair to do a feature on a game where one version is Japanese only. Grandia is an example. That’s a very debated game, but obviously few people would want to play that in Japanese, no matter how superior it is to the PS1 version. I’ll try to pick my next game soon…

The battle game was kinda neat, but its not that amazing in the saturn….seriously the playstaiton version was way better. Its almost always the case that any game is better for the system it was originally designed for, its just a fact of life.

Agreed. The battle Mode was just so limited, and really freakin hard. I had to use the action replay 4-in-1 cart, which I believe Racketboy sold me long ago. With that thing, I was finally able to survive the whole battle mode and see tyrant and wesker. I dunno how I used to beat that mode as a kid…Where did all my skills go? I used to be able to beat any of the NES megamans without dying once.

Oh and I was just thinking about Castlevania SOTN. Has anyone done a good comparison of the PS1 and Saturn versions of that game? I have this faint memory of seeing a very thorough one on a CV fansite years ago…

I’m playing Saturn Res Evil for the first time right now. I have played the PS versions and it seems like a good comparison. The Saturn version is slightly inferior but nothing major that affects the enjoyment of the game.
I loved Code Veronica and all the remakes on Dreamcast.
Yeah, Castlevania is probably a harder one to call. What’s more important better transparencies or an extra playable character? Language isn’t a big deal in that one like in Grandia. The way I see it Saturn is superior in almost every 2D game and holds it’s own on a few 3D games to give it a slight edge overall in my book.

Well Castlevania SOTN on Saturn didn’t just have worse transparancies. There is major slowdown at dozens of points in the game. The load times are also longer, and there is a few more of them in some areas I believe.

This is a little juvenile but didn’t Castlevania on Saturn have some more risque looking creatures like topless syrens than the PS version? I can definately remember seeing topless female creatures in the manual. Not that it’s a big deal to me, just another possible difference.

kubevubin sent me the link to the SOTN comparison which I saw long ago. You need to use google or some other service to translate it, but this is still a great one.

Any chance we could work on getting that translated? I’d love to be able to have it availible to the English-speaking public

Cut and paste each line individually, and make sure there are no spaces. Hope that works.