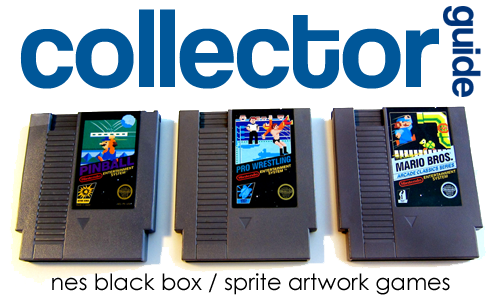 It is very easy to get overwhelmed when collecting vintage video games. It can be tempting to attempt to collect full console libraries of games, but sometimes focusing on a certain sub-category of a particular library can often be a more practical (and many times more enjoyable) experience.

This is the first of a series of collecting guides that will focus on a subset of games that are popular with collectors. The launch titles for the Nintendo Entertainment System (NES) are of particular interest to me, not only for their historical value, but also for their packaging style.

As an added bonus, I also included images and prices for three other games that, while they aren’t launch titles and use silver boxes instead of black boxes, they do use the same pixel art for their covers. They are still pretty cool in my book, so I didn’t want to overlook them.

Personally, I only own a handful of carts for these games, but I hope to collect more – including slowly starting to collect some boxed copies. My motivation for creating this post was actually researching the values of these games in various conditions so I knew what to expect when tracking them down. Knowing which ones are the hardest to find and knowing what is a extra-good deal is very helpful when you stumble upon some in the wild.

After the video game crash in the early 1980’s, Nintendo wanted to take extra precautions when marketing their hardware and games.  In addition to naming their console the “Nintendo Entertainment System” to avoid referencing “video games”, they also wanted to be very upfront to consumers what the games would look like.

To make sure gamers weren’t disappointed, Nintendo used pixel art on their covers instead of the more traditional hand-drawn artwork.Even though it was originally intended to avoid getting consumers hopes up about the games, these boxes eventually became iconic pieces of gaming history.  More than twenty years later as enthusiasm and nostalgia for retro video games grow, these covers are also viewed as appealing and collectable commercial art.

Since I love the sprite-based artwork, I wanted to round up the best quality scans of the boxes that I could find online and touch them up, so I and anyone else could find them easily.  You can click on any of the smaller cover images below to get a large version.   These larger versions should be the best you’ll be able to find online.  If you know of a better copy, please let me know in the comments below.

Since values of these games can vary so much depending on condition, I actually have four different price points listed for each game.  Of course, the cart-only will be your most affordable option.  The “Boxed” value is for a copy with a box that shows some wear (which is easy on these black boxes) that may or may not include the instructions.   A “Boxed Mint” copy is one where there is very little wear on the box and instructions are included.  And finally, the Sealed prices are for games that have never been opened and are still in their factory shrink wrap.   I based these prices on what I have seen in recent months on eBay.  If I have not seen particular game in a particular condition, I based the value on another game of similar rarity.  I think you’ll find these prices to be rather accurate.

I look forward to more articles of this series. I really think I want to try to collect all these in good condition. They look cool, its fairly cheap from a collectors staindpoint and easily obtainable.

Thanks for the interesting article!

Not to pick a nit, but did you mean to write “precautions” in the History section? 😉

Interesting that they chose to closely show what the games actually looked like. They still couldn’t help tarting them up a little bit with extra shadow colors beyond the 4 allowed in a single sprite and adding little details like the mouths on the DK, Popeye, and Icarus covers. Certainly a lot more true to what you were getting than the earlier console generation.

Thanks for the typo find — I even typed that in MS Word first — eeh.

There one box you forgot…..You forgot about the Super Mario Bros/Duck Hunt Box.

@ Shadow
I don’t know if you were serious or not, but to avoid any confusion, that’s a custom-made box**.

You can order ’em by the baker’s dozen here: http://www.uncletusk.com/node/11

**Made specifically to “complete” this box-less pack-in compilation.
And the 3-in-1 here: http://www.uncletusk.com/node/12

I am glad to see an article on the NES black box / sprite art games. I started my video game collection with this subset, and – while I only need 121 games to complete my NES cartridge collection – I still do not have a copy of Stack Up…

Thanks for these, so great moments spent on them !

I’ve never realized that before, do you know why some of the games titles have a * after the name ?

1: The asterisk “*” was to point out that the game was developed by a certain company (Irem or Square, for example).

2: For collectors who want the “boxed” experience but only have the budget for cartridges, the Cover Project is a great resource.
http://www.thecoverproject.net/view.php?cover_id=11824

i started collecting this series in the late 90’s, and most of my finds came from pawn shops and funcoland. i managed to get all games except for stack up and donkey kong jr math. maybe it was the packaging design, but this series was by far the most fun i had collecting video games – of course, the games themselves are ridiculously simple and fun too 🙂

Just love the art in these covers.Im a big fan of the art that was around before ninty desided to change it.I love the way you had to use your imagination.At the start of gaming lets say around 1982 defender had just come out in our town and it was in all the arcades.The cab art was fantastic but didnt reflect the game screen.Then at around 1986 the master system was in our house and i went out to buy super hang-on(i think).The box art on that was nice.My point is?I just wonder how many people got a game just on the way the box looked.

Thanks for the info !

I have them all except for DK Math and Clu Clu Land, CIB. Have pictures if anyone is interested. DK Math has gone through the roof and Clu Clu Land I just keep missing. One day though. Funny thing is about 5 years ago If I wanted to have completed this I could have, I thought I would have time. But they just keep going up in price, and I agree with you racket boy – The threee in silver deffinetly do count to me. I also count Mike Tysons punchout (sports series), Ice Hockey (Sports Series), RC Pro Am (Sports Series), and the two original release versions of Zelda. Super Team Games may be reaching a little far, but it does say Power Pad Series on the back and the logos on the side kind of match up. My two cents….

Great article!!! I had no idea there were so many of these that i hadn’t seen before. Do you know something about the different kinds of black boxes? I know that Gumshoe comes in a black just like the one you show here, but I also saw a copy that has a Mattel logo on it?! And are you planning on doing an article on small boxes? Love to see that!

How do you determine your sealed prices? i just watched a sealed copy of gumshoe end at $1500, you value says $600. I currently have the sealed baseball game on ebay ending in a few hours and it is at $810, your balue says $200.

I based it on what I was seeing on eBay mostly and where my gaps were, I compared it to other titles of similar rarity. If you have closed eBay auctions with bids on them, I’d be glad to update the number accordingly.

(edit: saw your auctions and updated the values — surprised to see some of those so high — especially Baseball! Congrats!)

And then there are all those Black Box copies with converters inside (hence why Stack Up still fetches $25 loose).

I fixed a non-working NES that I got from the local Thrift Store with the good old bending the pins trick. Now, I will start on collecting the Sprite Art cartridges.

these box arts are really cool and bring me back when I first got the NES in the late 80s. If only we all knew that these games would be worth so much now The games are so simple but I remember my mom renting them and me having so much fun. Kid Icarus, Pro Wrestling, Ice Climber, Baseball, Mario Bros Excitebike and Donkey Kong. Good times

I would love a framed poster of those boxes. They are fantastic and I could stare at them all day.

Hey nice article! Check out this site if you want to update box art. It has everything for almost every system. decent quality also.

daaa forgot the website sorry im going to the dentist and i guess my mind is somewhere else.

Thanks to Dave Marsee – he answered my question above around why 10-Yard Fight would have the asterisk (like Kung-Fu). Interesting

Who’s the lamer who spend all the time scanning his boxes anyway? Fuck him!!