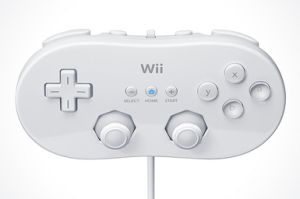 While it wasn’t really discussed in Nintendo’s E3 Conference, photos of an optional classic style controller for the Wii (Revolution) were found on Nintendo’s Japanese website.

The controller (see larger picture) seems to be a combination of the SNES controller and Sony’s Dual Shock controller. It also seems to have a form factor similar to the second Sega Saturn controller (sadly without the 6-button layout).

This optional controller is mainly geared for use with the classic downloadable NES, SNES, N64, Genesis, and TG16 games on the Wii’s Virtual Console.

Some people have been referring to this controller as a shell that would contain the Wii-mote inside of it. However, there are a could things that suggest that this is not the case:

I supposed we will have to wait for Nintendo of America to share more information about the controller before we know anything more definite.

Yeah, but you can still use Wavebirds on the Wii, so what’s the problem?

well it’s a little nit-picky, but I don’t want to have to plug the adapters into the side of the Wii. Purely aethetics, I guess.

And if you want to get REALLY picky, the Gamecube button layout isn’t as friendly for SNES and Genesis games.

I just want to say that this is pretty much an official picture. I don’t know if it was in Gamespy or Gamespot as I was checking E3 news in both, but one of them showed this picture and said that it was somewhere in one CD that came along in the press kit Nintendo handed out.

About it being wireless… Isn’t that thing in the middle the wire? Looks like it’s going up just a tiny bit and bending 180 degrees to make the picture. It does look the thickness of a controller wire so I assumed so, it might just be some stand for the controller.

As for being nitpicky, I’ll further pick on your nit. I think the form factor is great for SNES games (I haven’t tried the Wavebird), but it will still leave a bit to be desired for Genesis games.

Racketboy, have you ever come across the NEC Infrared PC Engine controllers? I’ve been looking for those things for years.