When you add a console to your collection, the first thing you want to do is get a handful of games to keep you busy with your new toy. However, most of us can’t spend afford to spend fat pile of cash for a few games. This budget-friendly list should help you quickly find which games will start you off well without emptying your wallet. (Prices listed are an average eBay price for complete US games, including shipping) 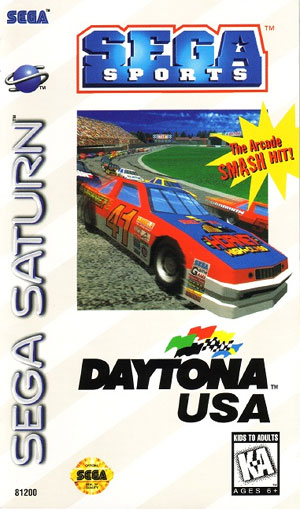 As one of the biggest launch titles and eventual pack-in game, Daytona USA is one of the most common games in the Saturn library. You can get it dirt cheap in its pack-in form as it is commonly thown in as game or system bundles on eBay. You can also find the original full-case version for just a few dollars. This Saturn version isn’t quite as polished as its Dreamcast sibling, but if you are tight on money (or just a collector), you can’t go wrong with the original console version of Daytona USA.
Shop for Daytona USA on eBay
Shop for Daytona USA on Amazon.com

Virtual On: Cyber Troopers: $6
This excellent conversion of the one-on-one mech fighter is one of the most innovative bargain out of the bunch. Virtual On is essentially a true 3D fighter with super-quick mechs trying to blow each other up while dodging and hiding behind obstacles in the course. However, once again, the Dreamcast also has an enhanced sequel, but this Saturn original passes the savings on to you.
Shop for Virtual On on eBay
Shop for Virtual On on Amazon.com

NiGHTS into Dreams: $20
This crown jewel of the Sega Saturn used to be one of the most afforable games on the system. However, with all the nostolgic talk about the game and the rumors of a sequel on the Wii, the demand for Nights into Dreams for the Saturn has pushed the price up to the $20 range. Even though this is by far the most expensive games on this “bargain” list, it is definately worth the price — especially since it hasn’t been ported to another console.
Shop for NiGHTS Into Dreams on eBay
Shop for NiGHTS Into Dreams on Amazon.com

My Started Picks For $50 Budget

If I only had $50 to spend on starting out a Saturn collection, here would be my top picks (in order of priority):

yeah, i second that! these games are overlooked too often. maybe more guides for other systems would be a good idea (and added into their own permanent section on the site)

I like this idea too. Too bad I don’t have a Saturn :(. I’d love to see a DC, SNES, NES, or Genesis version though!

I’ve got more of these guides in the works!

But the Dreamcast article is going to have to be epic. There are seriously 100+ fantastic games that you can buy for less than $20, most under $10.

Well, my goal is going to be to keep each under $10 with a few exceptions under $20.

For example, I HAD to include NiGHTS in this list.

But yeah, there are a lot of great, cheap Dreamcast games

Just thought I’d warn people that Herc’s Adventure is no longer a cheap game: In fact, it goes for about $40+ now, same with NiGHTS.

After dropping sad news like that, the good news is that many of the 2D fighters that characterized the Saturn can be found on the cheap, if you look in the right places. I’ve already scored a less than $10 copy of Vampire Savior, and I’ve noticed others selling Real Bout Fatal Fury, KOF97 and even X-Men vs Street Fighters in the $10-20 range.

Thanks for the update.
I’m planning on updating this series in the very near future — this will point me in the right direction 🙂

Yea Saturn games are skyrocketing in price. The cheapest I’ve seen complete Astal go for is 30 bucks. Rayman has become a 40 game as well.

Honestly I got Astal handed down to me, but it isn’t really that good of a game. Get the JAP version where you have unlimited continues!

I find it strange that you recommend Sega Rally 2 over Saturn Sega Rally. Rally 2 might look better and have more tracks, but the controls are too loose and ultimately it doesn’t play as sublimely as the Saturn game.

Recently i purchased both Daytona CCE & Fighter’s Megamix games(used-good condition with instruction manuals )for under $10 each.That’s quite a bargin these days now.

Yeah…the saturn collecting is killing me now. I by no means do this for profit and there are so many out there who do it makes it impossible!

I havent seen a copy of Rayman cheaper than $14.

Don’t forget Galactic Attack/ Layer Section. My favorite SS game and it easily goes for under $10