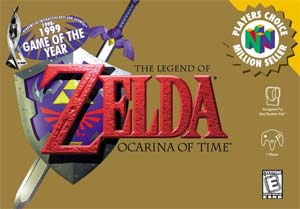 Wow where I am from Majora’s Mask is MUCH cheaper than Octarina. I could have gotten hologram copies for like $4.

As with Octarina, Goldeneye and some the rest I can’t seem to find them THAT cheap anywhere. Are you getting the prices from Ebay without shipping?

Craigslist is probably the best place I have found N64 deals. I got a good bunch of games for cheap there.

Its sad when people bash the n64 for not having that many games. Just look at that list, I know I’d be hard pressed to find that many good games on the PS. I’m glad Blast Corps. gets some love here.

@Caleb – all the prices I listed are with shipping on eBay. Although, most don’t include the box and manual since they are a bit harder to find.

@raist6676 – Actually, you instincts are correct. Timesplitters is developed by Free Radical http://en.wikipedia.org/wiki/Free_Radical_Design
Free Radical is actually made up from members from Rare that worked on Goldeneye.

Reply
Pingback: PoisonMushroom.Org - Combing the Net So You Don’t Have To » Blog Archive » Points of Interest - 4/28/07

Hey, if you can’t find these games for these prices in the store, maybe think about downloading them via the VC for the Wii. Only thing is, I find it very hard to go back Ocarina of Time and Goldeneye. They just seem SOOOOooooo slow! (Despite being SOOOOooooo good!)

An excellent piece, which actually proves that getting a N64 and games is way more cost effective than paying for them 10 euros each on the Wii… Brilliant post, brilliant!

Wow all those games but where are the other great games like resident evil 2 i got that on ebay for 9 bucks you should add that.

you can get perfect dark including shipping on half.com.
Same price for goldeneye.
check out half.com

you can get those two games for $4

Half.com is owned by eBay and typically the listing will show up on eBay as well

goldeneye and PERFECT DARK rock!! so does turok

Good starter picks.
My crap game store likes to put $35 price tags on any Mario game so thank Jesus for the internet.Its also the only one nearby that has stuff older than PS2.

Where is Paper Mario? That game is the bomb!

wow this makes me depressed. i had a nice 64 collection once but over the years somethings led to another and eventually i had only 3 games to my name……The Legend Of Zelda: Ocorina Of Time, paper mario, and banjo kazooie. this article has encouraged me to bring the collection back up! by the way a good game that i think was cheap is mystical ninja: staring goemon and mischief makers.

i see im wrong on my last post about the two games you should add. i guess over the years the prices of thoughs games went up. sorry about that