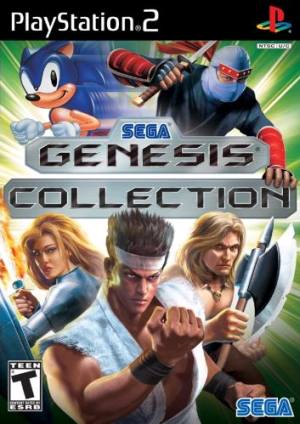 With all the hype over the retro downloads on the Wii’s Virtual Console and the XBox Live Arcade, many gamers have completely missed the release of the Sega Genesis Collection for the PS2

For once, Sega has gotten the clue and included a health spoonful of top-notch Genesis classics on one compliation. While not every great Genesis game is included, the Sega Genesis Collection has a many of Sega’s finest. (See list below).

This PS2 compilation has a few big advantages over the next-gen game download systems.

As if the price savings isn’t enough, you also have a hard-copy version of games on an actual disc with a case and manual that gives you more of a collector’s feel and sense of ownership.

Now, you may be wondering how good the emulation and presentation of this compilation, lets take a look at what the mainstream publications are saying about the package:

“Video is mostly respectably emulated, but Digital Eclipse’s usual lack of any support for these games’ native resolution has once again left this writer in the lurch. They did include an option for progressive-scan, though, which will marginally help these games’ appearance on HD sets. As they are, in 480i, they look swimmy, indefinite, and flickery.

Sound emulation doesn’t fare much better. The music seems to be streamed off the disc to save on CPU usage, but this has caused oddities like the music in Sonic 1 and 2 not speeding up when it should. Plus, there are glitches here and there with music starting or stopping in the wrong place. Sound effects sound fine in some games and dreadful in others, but there’s a general cast of inaccuracy over the whole package that will grate on you if you’ve played any of these games recently.”
GameSetWatch

“The Playstation 2’s Dual-Shock controller is also a big upgrade from the Genesis’ ridiculously oversized 3-button pad, so playing the games is a breeze. There are some interesting unlockables on the disc, including some Sega arcade titles and interviews with developers. There’s also support for progressive scan video, which helps sharpens up the retro graphics.”
GamePro

“The good news is that Sega Genesis Collection includes a number of hits in the 28 game collection… all of which are perfectly emulated and packaged with their respective instructions… Unfortunately, the game’s woeful presentation kicks it down a couple of notches. Sega didn’t bother to spice up the menus or think to include some of the console’s old advertising. Heck, it didn’t even provide dubbing for any of the developer interviews. It literally looks like someone walked into the Sega of Japan office, set up a camera and had everyone take turns speaking. For a machine this grand, such treatment is unforgivable.”
GameDaily

So it sounds like Sega adjusted the games fairly well to the modern console, but could have spent just a few more resources to polish the presentation. However, if you are looking for the best retro gaming bang for the buck, you can’t go wrong with the Sega Genesis Collection.

I am pretty sure this could be followed up with another collection if it sells. I will buy it not because its so well put together or the best selection, but in hopes that more releases like this follow.

For me, the revelation of Zaxxon and Tac/Scan among the unlockable extras was enough to guarantee I’d be dropping $20 soon. Now if only we could get a whole collection of pre-crash Sega arcade stuff.

Hi dear frainds i am living in india on delhi state please tell me how i have to pay to buy for”Nessuper Nintendo System Controllersf-zero Snes Game ” and sega dreamcast plese reply me how much i will pay in my currancey.