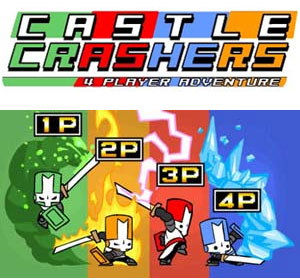 Between the fact that I have been waiting years for a new game like Guardian Heroes and my love for The Behemoth’s artistic style, Castle Crashers is the most highly-anticipated XBox Live Arcade game in my book. (see my initial Castle Crashers post)

I didn’t have many doubts about the game after seeing early versions in action, but I was still anxious to see how the game progressed after further development.

Joystiq was at the GDC ’07 Conference and was kind enough to post their impressions of the latest build of the upcoming Behemoth brawler….

“The amount of personality and panache exuded by Castle Crashers seems to lend it more depth than it actually has, as does the jump-in-anytime multiplayer gameplay. In fact, playing the game on your own would likely be an ill-advised activity entirely, which is just as well since there are usually more than enough enemies and bosses to keep a party of four well occupied. The game is paced exceptionally well, with enemy types changing just as an inkling of repetition becomes apparent. The lumbering and amusing bosses in particular require a more evasive approach in-between bouts of unrestrained sword slashing (likely the most useful strategy in the game).”
Read Complete Preview

Joystiq also shared a good video clip showing off some level design that we hadn’t seen in previous clips. You can see it and other older clips on the Castle Crashers video page.

I can happily say I’m still impressed and attempting to wait patiently to play it.

I’ll just slap my previous comment in this entry too: That’s a nice looking game but how do I play it? With the worthless D-Pad on the Xbox 360 controller? Where’s a decent 2D 6 buttons digital pad for the 360?

Why can’t you use the analog stick? You don’t need precise movements for it…

Well, I hope that you’re really patient, because the release date has been pushed back to sometime in 2008, due to Microsoft lifting the 50MB limit. They’re adding a lot more content to the game, as a result.

Why can’t you use the analog stick? You don’t need precise movements for it…

You obviously never saw people playing Streets of Rage at a high level like I did first hand, if you did you wouldn’t even ask that question. Of course we need a good digital only pad not only for Xbox 360 but also for PC emulation. When was the last time you saw a good old school gamepad (IMHO Sega Saturn pad isn’t that great as people say)? Prolly never, the closest thing to a decent gamepad was either the Logitech Rumblepad 2 or the Saitek P2600.

I’ve always preferred the Sega Genesis 3-button controller, personally, but I tend to use the 6-button one because a lot of the games that I own happen to use it (and make games so much easier).