After a great deal of speculation of what Capcom’s new 2D fighter would be, Famitsu magazine has published new new information (in Japanese) and screenshots of the new game. Unfortunately for those waiting for Street Fighter 4, the game will indeed be a fresh franchise for the 2D fighter genre.

The game will be based off the Sengoku Basara franchise, known in the USA as Devil Kings. The game already has a couple 3D hack-n-slash action titles on the PS2, but Capcom apparently thought the series would do well in this old-school genre as opposed to the crowded action/adventure arena.

The Famitsu scans, original posted on 2chan, aren’t the highest quality, so I apologize for the low quality (I will post higher-quality versions when available) 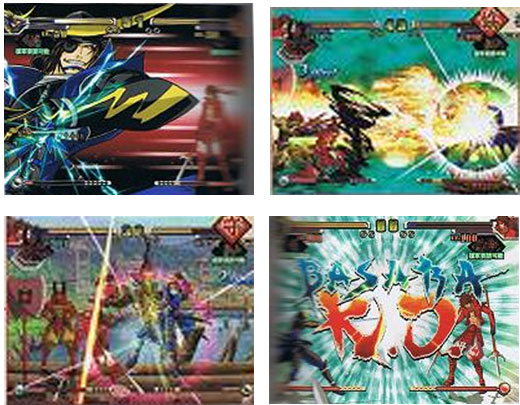 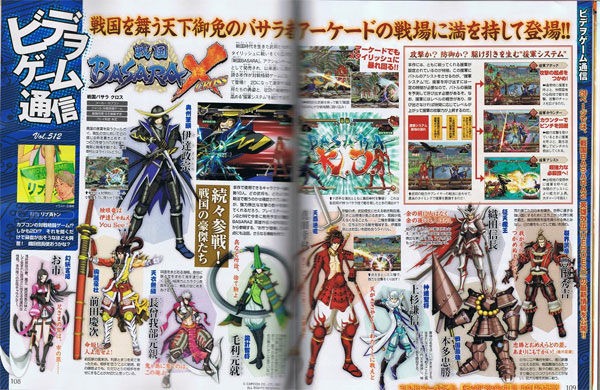 Ten characters have been revealed so farm and mention of the PS2 and Wii are included in the scan. Other than that, not much else is known about the game at this time. I’ll be posting updates as I encounter them in the comments below and/or this forum thread.

What’s pretty bizarre about this, is that Sammy just today annonced a new Guilty Gear 3D Hack and Slash adventure, so it’s seems these two series’ are swapping places!

SF is the property of Capcom USA now.
So keep an eye someone like David Sirlin for news of SFIV (if it ever comes)

Devil Kings was a very very mediocre Dynasty Warriors rip-off. I heard a lot of material was changed during the translation phase when they were bringing the game outside of Japan. I heard that the Japanese one’s plot was based around the period of Oda Nobunaga and it had more characters than the American version.

The American version is just spliced with horrible voice acting and random CG and animated cinemas that make no sense.

Apparently the first one was popular enough in Japan to warrant a sequel. And now they’re making a 2D fighter of it. A majority of the characters were of poor design so this does not look interesting. It might not even be released in the US seeing as how the 2nd Sengoku Basara game remains in Japan.

u must be a dynasty warrior fan..
hell dw sucks coz the frame rate and gameplay is slow…