The last few years, some of the juiciest retro gaming rumors have been orbiting throughout the Street Fighter universe. While fighting fans can’t help but be pleased with what we’ve seen of Super Street Fighter 2 Turbo HD Remix so far, we always have the thoughts of what else could be in store for the Street Fighter franchise… especially if it involves a Street Fighter 4. 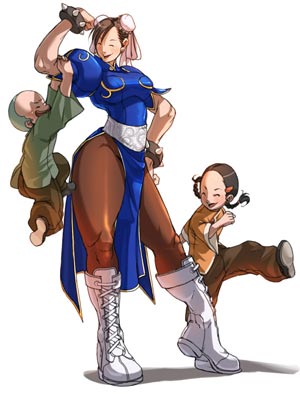 Street Fighter 4 rumors seem to crop up literally every year around this time. (see last year and the year before) However, they always seem to have a some credibility behind them. This year, we will apparently be getting some landmark Street Fighter news of some sort at Capcom’s upcoming show. The only question is, what will it be?

RyanDG over at Arcade Renaissance pointed out that there has been a lot of talk on the Capcom Digital blog from key members on the Capcom USA team (who happens to have exclusive rights to the Street Fighter franchise) about upcoming projects. They have used some hype-filled terms to describe some of the upcoming projects that will be revealed this month.

“We have a limited number of development staff, with a lot of projects under development – some major, some minor, some announced already, some yet to be announced (we have a Gamer’s Day coming up in the middle of October where we are going to drop some big bombshells – you’ve been warned).”
– Brian Dunn

“Well, I can testify, that what’s coming is a megaton bomb! You will not be disappointed.”
– Rey Jimenez

“There are multiple bombshells coming. We have our Gamer’s Day event in London next Wednesday (10/17), but there will be announcements and things starting to come up on Monday (10/15) and continuing all week. Keep an eye on capcom-unity.com because we’ll have all the big news there.”
– Brian Dunn

So could this lead to anything besides a Street Fighter 4 announcement? Actually, there many be more possibilities than you think. RyanDG explain his thoughts…

“#1, I fully expect that part of what Brian Dunn and Rey Jimenez are referencing here is more than likely a playable version or at least a video of Super Street Fighter II HD Remix at the Gamer’s Day. This would satisfy several concerns that people have expressed about wanting to see the game in action. However, from the statements made by both Capcom employees, the chances that something more is in the works is pretty much a given. The only real question that needs to be asked is how exactly does it relate to Street Fighter.

At face value, a lot of gamers are using this as an opportunity to get excited about the potential announcement of a “new” Street Fighter fighting game. Though I do agree that based on the choice words of “bombshell” that Street Fighter 4 in a traditional form would be the fan choice, I have to question the actual feasibility of the project prior to the release of the “reworked” Super Turbo. An announcement of Street Fighter 4 would more than likely cool the hype for the Super Turbo release, and as much as fans would like to see Street Fighter 4, I’m not going to get my hopes up for a game that has disappointed many rumors before.

This leads me to the second option. Could they be referencing the Street Fighter action game that was previously rumored last month? It’s a possibility, and one that would likely fit with the planned Capcom Gamer’s Day. I do feel that if this is the case Street Fighter fans are going to be disappointed with any announcement out of Capcom in regards to the franchise. With Guilty Gear and Soul Calibur both making the leap to action titles, perhaps this is the signal that Capcom is planning the same.”

I honestly couldn’t say this any better, so I once again commend RyanDG for his great rumor-digging and sharp insight.

Personally, I would be surprised if one of the big announcements wasn’t at least showing the SSF2T HD Remix in action. Capcom’s been teasing us with a steady stream of sprite designs, but they must have something to demo if they are going to release this beauty any time in the next year.

As for Capcom USA’s other announcement(s), it very well may be a Street Fighter action title, or even another new high-definition remix, but I think it would be a great missed opportunity if Capcom passed up making a solid Street Fighter 4 when there are so many fans out there that are clamoring for it. I guess we will find out more next week.

Personally, I don’t believe the hype, I don’t really think its going to be SF4, I do remember hearing rumors that they are going to be MVC3, but thats highly unlikely. But whatever all we have to do is wait and see.

I think the MvC3 rumours were nothing more than that and never really taken seriously, as Capcom had lost the Marvel license by the time. (Pity though, they probably produced the best Marvel games ever.)