The Dreamcast is truly an amazing machine that was ahead of its time. One amazing capability that Sega’s little white box was able to pull off surprisingly well was emulate original Playstation games.

Now don’t get your hopes up too much — while some games run quite well, the number of Playstation games that are enjoyable are relatively small.

According to Wikipedia, “Originally, Bleem! was planning to have the disc able to run any Playstation game on the Dreamcast, but due to technical difficulties, they made the idea of the “Bleempak”, in which the software would boot only 100 specific games each.” However, due to some technical difficulties, Bleem only release three official retail Bleempak released (Metal Gear Solid, Tekken 3, and Gran Turismo 2).

As Wikipedia also states, “the games ran in a 640×480 resolution, as opposed to the PS1’s and even PlayStation 2’s run on PS1 games’ 320×240 resolution, and featured anti-aliasing and bilinear filtering. This drastically improved the games’ graphics, but also brought out some graphical imperfections that were originally hidden in the lower resolution.” This is especially enjoyable when combined with a Dreamcast VGA Cable. 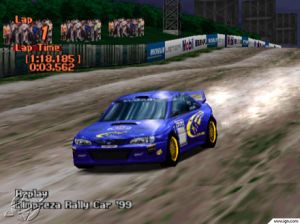 Since the retail death of the Dreamcast, enthusiasts have obtained leaked betas of the Bleemcast emulator that runs a number of other games. You can find a fairly comprehensive compatibility list here in order to get a feel for what will work on the Dreamcast.

There have also been a number of Dreamcast scene releases that combined the Bleemcast emulator with the Playstation ISO built into one self-booting Dreamcast disc. The GagaMan(n) from the Dreamcast Junkyard also has played around with some of these and has shared a number of actual gameplay video clips to show you how well they play.

It’s a shame that Bleemcast is fairly dead as far as development goes (unless the defunct company makes it open source) as it would be great in increase compatibility. Anyway, I would love to hear from any readers that have had Bleemcast experience as well and what games you find most enjoyable.

I remember when the Bleempack’s were announced. I was pretty darn excited that I would be able to play the remakes of Lunar on the Dreamcast. It was unfortunate that only 3 games were ever playable with Bleem and I never got to play Lunar on there (I did eventually get a PSX and was able to play them). I did buy the Gran Turismo bleem and as much as I’m not a fan of racing games I had fun playing it on the Dreamcast. It did look a lot better than on the Playstation.

The bleemcast beta works really well for the most part. The main difference with GT2 between the actual released bleemcast disc and the beta is a lack of vm support, but on the whole it works perfect. Compatibility with other games, as you probably know, is a bit hit and miss – I managed to get all the tomb raiders and Destruction Derby to work well though. It even plays back-ups of PSX games, although Demo discs, wierdly, wont even boot. Oh, and thanks for the support!

I’ve only played bleemcast! for Metal Gear Solid. The improvements in terms of graphics are nice, but I found that the other aspects of the game took quite a hit.

Graphically, bleemcast! for MGS rewards you with sharper on-screen objects, along with a smooth frame rate. Unfortunately, many of this game’s graphical flaws were hidden by extreme pixelation in the PSX version…

You’ll notice a lot of texture warping, especially whenever you’re crawling through ducts. However, do note that this isn’t bleemcast!’s fault, as it’s merely a side-effect of how the PSX handles textures. If you think that the graphical issues end there, however, you’re wrong.

A lot of time went into bleemcast! to preserve the original effects seen in MGS, so all motion blur effects that were in the original game are in this version, as well…and then some. Motion blurs are now applied to all on-screen elements. And yes, that includes text (as seen in the intro).

Furthermore, the stealth camouflage effect is pretty much non-existent, instead featuring a more toned-down effect (as seen in the PC version).

So, the graphics are nice, but far from perfect. How did the audio fare? Terribly, to put in bluntly. I can’t really explain it in technical terms, as I’m not much of an audio buff. However, I can say that practically any echo effect (or any other effect that is drawn-out) from the original is completely butchered. The voices sound fine, but the rest of the audio (including the music) just sounds terrible when placed alongside the audio in the original.

In terms of gameplay, things are actually done quite well. I don’t really enjoy being forced to use the analog stick to control Snake, but it works quite well. The item toggle buttons for quickly arming and disarming yourself are now mapped to left and right on the d-pad, while down on the d-pad acts as the Select button.

bleemcast! for MGS supports VMU saving, although it doesn’t work nearly as well as it should. Do note that you’ll have to format an entire VMU just to save a single bleemcast! game. Not cool. Also, it usually takes three or four attempts to complete your first save. Just try again until you don’t get a save error, and you’ll be fine…until you happen to get both endings for the hidden surprise that awaits. Once you save at that point, you’ll no longer be able to save again.

While I’ve never really messed around with the camera that you find in MGS, it’s worth noting that you’ll never be able to successfully save again once you completely fill up your VMU with photos. There’s no way to delete them, so you’ll have no choice but to format the VMU again at that point.

By the way, one of the best scenes in the original MGS for PSX is now completely ruined in bleemcast! for MGS: Psycho Mantis’ mind-reading scene. The novelty of playing the original was that there was a chance that you’d have game saves from other Konami games on your PSX memory card while playing MSG. As such, Psycho Mantis could “read your mind” by accessing your memory card. He certainly surprised the Hell out of me the very first time that I faced him, as he said with striking confidence, “You like Castlevania, don’t you?” I was floored. How did he know? I soon realized that he’d simply read my memory card. Awesome. Anyway, since you don’t have access to other Konami games for use with this feature, you’re robbed of this innovative use of peripherals. Well, scratch that: His telekinesis trick is fully in-tact. Still, that isn’t the coolest part of the scene, and it simply isn’t as effective at impressing people on its own.

Anyway, the game still plays quite well, and everything’s in-tact to a degree that the game is fully playable. I still play it now, but it’s clear that the best way to play MGS is on PSX.

I’ve played around with the Bleemcast beta. Works pretty good. Out of the Playstation games I have, it seems to run Tenchu the best, or at least Tenchu is easiest to play because there’s not a lot of L2 R2 action. I had Diablo, but playing that on Dreamcast was a joke since your inventory stuff went on with L2 and R2, you would’ve had to play through the game without ever changing equipment, which I don’t think is possible.

ok i understand about bleem but how do u get it or make it work or is there a bleem emulator?

i want to save in bleemcast MEGAMANX6 but i can’t
plz help me ……..

I have tested it extensively and have found that a very small percentage of games work well but a lot of them at least do something. Games like re-loaded are missing a lot of the graphics and have no rendered cut scenes. And forget about DOA that just goes to black. No game supports memory cards. The plus side is I tend to get better compatibility for bleem than i do for pcsxbox. But pcsxbox has almost no graphic glitches on the games that are fully compatible including the movies. Tekken 2 glitches in game though pretty badly in pcsx and works fine on bleemcast.

I was wondering if there are other emulators out there that you can download and play on the Dreamcast? I have the SNES emulator and it works almost perfectly. I would like to play other systems though.

does anyone have a system for sale where im able to play psx games on.

Hello, I love MGS on the bleemcast! also Tekken 3. Racketboy I am able to Save on MGS Bleemcast is that normal?

@Spin the Demon, yes it is normal to be able to save on the 3 offical Bleem! games that use the boot disc, GT2, MGS and Tekken 3 all have working saves, granted you have a backup memory card that you can format for these 3 games.

I have one gripe about Tekken 3 though, the lack of analog stick on the first PS1 controllers means that even though MGS and GT2 use the analog sticks, Tekken does not…

Now as for the Bleemed games that are only betas, the Analog is not working, saves and custseens are not working.

As of December of 2009, the 3 offical Bleem Boot discs have been fully cracked, so if you know where to find them they can be had for free.

Also note, that you can use back ups of the 3 games and thay play fine.