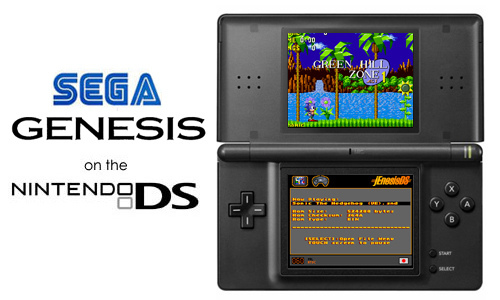 While Genesis emulation on the DS isn’t as perfect as you can have on a PC, it has a level of quality that justifies the little trouble that it takes to set it up – depending on the games that you want to play on it.

jEnesisDS (by Lordus) is arguably the best choice for the DS at the moment, and it is likely to remain so. You may want to try PicodriveDS but it does not support sound and generally performs worse. Neither project has been updated since 2008: the PicodriveDS dev has stopped working on it and suggested people to use jEnesisDS instead . The developper of jEnesisDS has apparently worked for SEGA and is unlikely to continue work on the emulator.

jEnesisDS doesn’t scale the image to fit in the DS screen, which is annoying and can be very unpleasant in certain game – but it is without re-scaling that jEnesis DS achieves good performance in terms of speed and compatibility (compared with PicodriveDS which does re-scale).

For this guide I used jEnesisDS (v0.7.4), which you can download from here. This is the most up to date version at time of writing and it is very much worth using it over older versions – on top of performance improvements, it also offers a useful feature that can help you cope with the drawback of the image not fitting fully in the DS screen.

In any carts with automatic patching it is as simple as dragging and dropping a file to the memory card. If your cart requires it, you will need to manually patch the .nds file before moving it. This emulator doesn’t need to be placed on the root of the card.

When you run the .nds file on your DS (do this just like you run any other .nds such as games), the emulator loads reasonably fast. The touch screen will show the folders and files you have on your card. Simply use the D-pad and buttons to navigate towards the ROM you want to run and select it.

The ROM will load. The touch screen will continue to give you some miscellaneous information, and you can pause or un-pause the emulation by touching it.

Although pause and un-pause works perfectly, other touch screen controls aren’t very responsive. From my experience with the emulator you will have to suffer through them to access some features:

1. You can access a “Configuration” menu by touching the “Pad” Icon in the top left of the touch screen. This brings you to several options that you can (fortunately) navigate with the D-pad. I haven’t fiddled much with the emulations settings as games run very well without doing anything. But for example, you can sacrifice some sound quality for speed by turning on the “Fake Z80”.

2. To use the save “STATE SLOTS” you need to touch them (the “I” and “II” in roman numerals in the bottom right). This brings up a sub-menu that can be then navigated (fortunately) with the D-pad.

Scrolling the Image to Fit The Screen

The image doesn’t completely fit into the screen. This is an annoying drawback of this emulator and to be honest it can ruin the experience in some games, but for others it can also not bother you at all.

There are some ways built into the emulator to cope with this:

If you don’t adapt at all to this flaw then you have to do without jEnesisDS. Try Picodrive or don’t emulate Genesis on the DS.

Given the performance and compatibility of this emulator, it is still probably the best choice on the DS but you can also try the (no sound)  port of Picodrive.

The games I tried on jEnesisDS were running quite decently at or near full speed, which is nothing to scoff off on the DS.

The emulation isn’t perfect at all, with some graphic glitches and the sound not being accurate in some instances, and also having occasional glitches (particularly when you use the state slots, although a bit after loading it will start sounding normal again).

Finally, ROMs larger than 3 MB aren’t supported at all (this includes, sadly, Sonic & Knuckles). This was supposed to be work in progress back in 2008 but obviously as it is currently nearly 2011 without a new release you shouldn’t count on that in the foreseeable future if at all.

Despite all this, in general the emulation is very good. The “Pros” list has 2 things but those 2 matter much more than the minor annoyances in the “Cons”.

It’s a real shame the DS doesn’t have at least NTSC resolution (240 lines). IMO, this makes the DS unsuitable for emulation of most systems. Even when scaling is available, scaling down leads to artifacting. Fortunately, the 3DS will have 800×240 resolution, so we can look forward to much better emulation on that handheld.

Want some “OTHER” good portable emulation? Four letters:GP2X
Ive got the f200 and its got to be the best.When i think about it ive never stoped playing it(
“thats over 3years ago”.My dream is to have a portable dreamcast now that would be cool but i think the systems would need to be very powerfull.So the Dream/cast Continues.

I am planning on doing some other portable emulator reviews, but I may be tackling Android next.

I had a GP2X, but it didn’t seem like the reviews would be that useful for most as the install base isn’t that big. Also, I got tired of the batteries draining out and the newer hardware quality isn’t as good as my old GP2X.

I may pick up a PSP someday…

I have a PSP and have very good emulators for it including :NES,SNES,GB and GBA, Master System, Genesis, GameGear, PCEngine, N64 (a little slow) PSX (of course) NeoGeo, CPS-1 and CPS-2 and many other system and old home computers.

i wonder if it could be ported to run in dsi mode and if it would make any difference
also i have a dstwo and the snes and mame emulators made for it that use the extra internal cpu in the flashcard are pretty good ,i wish they would make a genesis emulator for the dstwo,maybe a port of jenesis,also a port of nitrografx with sgx and better cd support for dstwo would be cool
,also with the 3ds and the 16:9 like top screen i hope that someone will port this over if 3ds mode is ever cracked,i doubt that a new version would be able to take advantage fo the 3ds’s wider screen or enhanced resolution even though it has been shown that flashcarts work on the 3ds in ds mode,i think we would need access to 3ds mode to port these emulator to tke advantage fo the new higher res wider top screen on the 3ds,the genesis emulator looks great on the psp ,even thought the psp has a 16:9 screen,you would think it would look stretched because when genesis came out all tv’s were 4:3 also i dont get why the jenesis doesnt fit right and has to be scaled so much ,the ds screen ic close to a 4:3 aspect ratio

Games not visible after placing it on sd card . Extension file is .md

And my jenesis version is 7.4
What would i do . Please help thanks