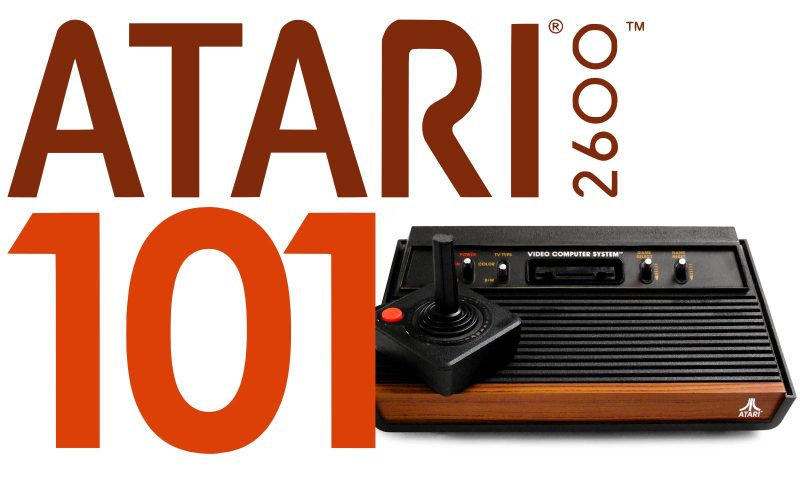 The RetroGaming 101 series is aimed at gamers who are just starting out in the classic gaming scene or are curious about an older console that they don’t know much about yet.  Those of you that are especially knowledgeable about the featured console, I encourage you to add any information that you think would be beneficial into the comments section. If you are new to the featured console, and still have questions, you can also use the comments section and I will do my best to help you out.

While it wouldn’t actually be the first cartridge-based home game console, the Atari 2600 would prove to be the first big hit, ushering in the first golden age of home gaming while the golden age of the American arcade scene was in full force.  And though its popularity would inevitably decline with the onset of the video game crash of 1983, the console would still have appeal years later. 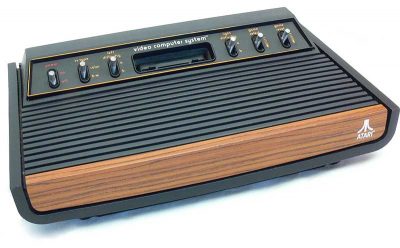 The CX2600 Sunnyvale “Heavy Sixer” is the original release, featuring six large switches as well as an increased weight to the console due to an extremely thick plastic casing and aluminum radio frequency shielding.

The molded casing is curved on the front edges, and the unit was originally constructed in Sunnyvale, California.  The Sears Video Arcade was the variation of this console for sale in Sears, Roebuck and Company stores. 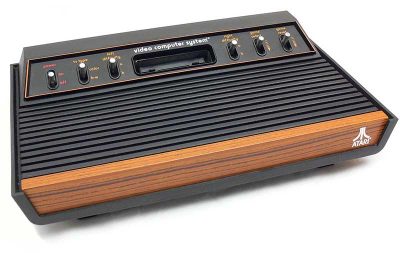 The CX2600 “Light Sixer” is similar to the original, though with less plastic molding to reduce weight.  A channel select switch is built into the bottom right of the console.  The casing also drops the curved front edges.  (This is the main way you can tell the difference between the Heavy Sixer and the Light Sixer in photos)

Again, six large switches are featured on the top of this console. These were produced from roughly 1978 to 1980, after production moved to Hong Kong. 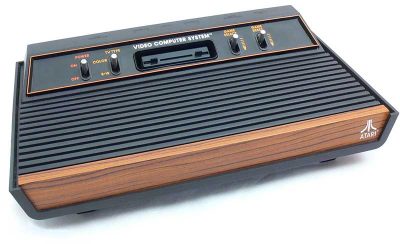 The CX2600-A looks similar to the Light Sixer, except the difficulty switches have been repositioned to the back of the console, so only four switches stick out on top.  This is the first in a string of four-switch units in the Atari 2600 family.

Some early examples of this console used the same lower case mold as the Light Sixers, with a piece of thin plastic adhered over several now-unneeded holes.  1980 is the year these start production, going through 1982. 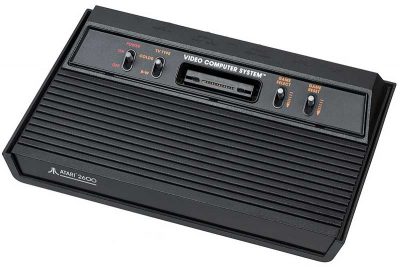 The Atari 2600 “Darth Vader” is the first to actually use Atari 2600 as the logo (the previous models all being officially named the “Video Computer System”).

The “Vader” loses the wood paneling of previous consoles in favor of an all-black exterior, which is how it earned its nickname.  As endearing as the wood panel design is now, in the early 80’s wood paneling felt more “70s” and therefore out of style. 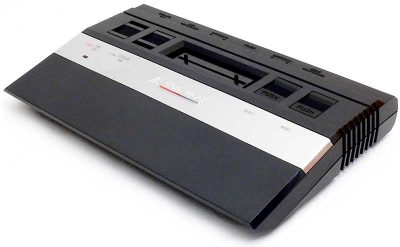 The goal was to both modernize the design (with similar styling to the newer Atari 7800) and to implement a smaller, cost-effective frame.

The “Jr.” moniker was purely unofficial.

The redesigned 2600 was advertised as a budget gaming system (under $50) that has the ability to run a large collection of classic games. 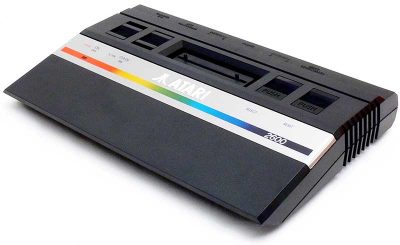 There isn’t really much of a difference of this “Long Rainbow” variation of the Junior aside from the logo image presentation and the longer rainbow printing that spans the full width of the console.

From the active eBay listings for Atari 2600 Jr systems, there are about three times as many “Long Rainbow” variants of the Junior than the short rainbow. 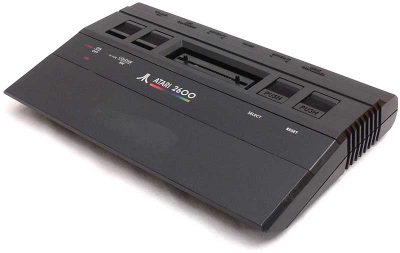 There are several minor stylistic variations of the 2600 Jr. design, including the “large rainbow” (shown at right), “small rainbow”, and the rare all-black “Irish” version (made in Ireland).

This version is much more difficult to find in the wild (especially boxed), but there isn’t a heavy premium on the variation.  (Maybe that will change if more attention comes from Atari collectors)

And this barely begins to scrape the surface, considering the massive amount of joysticks, keyboards, keypads, and other peripherals available for the console.

Ha, my voice was heard. Thank you IRC. Good job Ack. You should show pictures of the different versions of the 2600. Like the Junior and Vader, possibly the Sears versions.

Nice article for an old beast.

There are also 2600A 4 switch wood machines that have the Atari logo and name on the right as well. The vader units had the logo on the left and actually say Atari 2600. Both my wood and vader units have the same revision 14 ©1980 board.

Apparently they originally planned on putting speakers in the 2600 itself, that’s why the top resembles a plastic speaker grille. Heavy sixers even have a circle(s) molded into the underside of the top face and this is probably the reason they have the heavy aluminum shielding instead of the thinner tin shielding of latter models.

There are composite and S-Video mods for the 2600 so you can escape RF land. I’m almost done installing mine, but I made it more complicated for myself by socketing everything and thus having to cut a hole in the shielding.

Have you played Atari today?

Actually, the consumer division of Atari was sold to the former CEO of Commodore, Jack Tramiel, after he had quit Commodore. He basically bought the company with promissory notes, which were later tore up. Jack and his family then preceded to run the company into the ground. The coin-op division (the real, true Atari) was retained by Warner for a while, renamed to Atari Games, and parts of it were sold to Namco and other companies over the following 20 years.

Atari games FAR outnumber any other console game available at my local Goodwill Computer store. I intend to get into it someday, and this article is a great way to do that (Though picking the good games out of the pile may be pretty hard to do).

Since you mentioned the Supercharger, I’ll mention that there’s a mod available that allows you to load almost any 2600 game on it. I haven’t tried it, but it looks pretty straightforward: http://members.cox.net/rcolbert/scmod.htm

The Supercharger is also necessary for the 2600’s only RPG, Dragonstomper.

If you want to find some good games for the 2600, anything by Activision is going to be worth a look. You can also check out the Activision Anthology for the GBA, those ports are quite good.

This was the first gaming console i ever had! My brother and I received it for christmas. I loved these terrible games. Combat, venture, kaboom. I still play them sometimes on my mame machine. Nice article!

I have the Coleco 2600 add-on, which uses official peripherals…interesting how they had an all-in-one system that , if the price was right, provided a great value for the gamer(Coleco’s own ports, and the 2600 library).

My fahter bought my siblings and me an Atari 2600 system(Black version)for Christmas in 1982.It came with the I believe 02 games:Pac-Man & Combat.We had other 2600 games such as Donkey Kong,Pole Position,Popeye and a handful more-which i can’t recall.In addition we had both the Commodore Vic-20 & 64 systems.Those were the days when video games did’nt cost a kings ransom.Though playing time was often hard when competing with multiple siblings and the durability of the stiff joysticks and the frail constructed cartridges did’nt exactly imbodied high quality gaming.

I for one am a Maze Craze and Frogs and Flies junkie. Have to play with a Genesis controller though.
My only qualm is that I wish more games had some sort of end. You just end up turning it off and there is an awkward moment afterward.

Some games for the 2600 work only on the older 6 switch models, Kool-Aid Man for one. So it’s evident that during redesigns of the 2600 motherboard, other significant changes also happened. Most games will work on any 2600 model, but be aware some will not work on all versions.

man, i was a killing machine at BattleZone, and Saboteur.
my most favorite game for the 2600 was Quadrun. cuttin up creatures on Secret Quest. shootin space rocks on Asteroids. collectin treasure on Aquaventure. terminatin bugs on Centipede and Millipede. and tryin not to get my behind chewed up by dragons on Adventure.