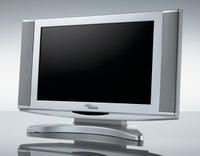 Mark 2000 over at rllmukforum.com’s retro forum had a really interesting first post:

“Even though the NES has been emulated perfectly for nearly 10 years now I was still buying NES carts. The reason was because NES games look horrible when displayed in accurate, sharp, pixel perfection that a computer offers. The CRT TV adds an amount of blurriness to the image that somehow gives it depth, smooths out jaggies, and makes dithers look more like solid colors. After all, the programmers knew the display they were designing for and they took advantage of it with tricks and methods optimized for an interlaced CRT display. Same goes for any 8 and 16 bit system.

I have a 20″ LCD screen now as my only television (so I can port it easily to any room) and I attached my NES to it awhile back. It looked just like the computer. What’s worse the low rez of the NES did not translate well onto the 640×480 LDC display. Some lines were repeated, others were skipped. It just wasn’t a Megaman I could recognize easily.

So now I ask, as we throw our bulky CRTs out the door, what becomes of retro-gaming? Is it forever ruined as it was intended to be seen? I laughed as a sold my 90lb 23″ CRT for an unprecedented dollar per pound. I did hand springs and I lifted my 18lb LCD up with one hand and placed it on a credenza in my living room that would have bent and crack with a conventional monitor on it. I nearly split my pants when I saw how bright and sharp Jerry Sienfeld’s teeth were now. But as I type this I have anxieties that my glorious 70+ carts and multitude of stupid controllers are going to forever gather dust because the experience on TV is no better than experience just 5 feet away on my computer. I worry that I’ll never see that fuzzy, well rounded Samus sprite again, rather I’ll be shedding tears onto a Logitech dual action as a skinny, jagged Samus runs her pixilated ass across a sharp, monochromic cave.”

He brings up a good point and some of the members have some good insights and ideas. Scanline can be used to maintain the intended look of older games. Also, people like me play their Nintendo emulation on their Dreamcast on a regular TV.

But I don’t often think about how new technology might be changing how our older games are played and enjoyed. This thread was great for getting those thoughts going.