Note from Racket: This episode of the podcast was directed by forum member jfe2, who won the rights to do so in our 2009 charity auction.

With the exception of an interview we did with the folks at Loading Ready Run, the podcast has not been especially funny.  This episode, however, more than makes up for any deficiency in comedy so far, as both of our guest(s) are very gifted in gut-busting.  Presenting: 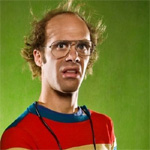 Keith is a retro gaming connoisseur, and he lets his opinions (which are more like facts) be known on his show “Talking Classics.” In our interview, Keith gives his opinion on ever major video game company, explains why he has such a love for Sega, comments on his appearance with Peter Jackson and James Cameron at Comic Con 2009, and lets me know how he handles all his  groupies.

extra note from Racket: Since the recording of this podcast Keith has published his new Neo-Geo music video — special thanks for the shout-out to the racketboy community at the end 🙂

Nathan is an L.A. based comedian who works in sketch comedy, advertising, and (soon) film.  You can see much of his work by checking out and subscribing to his YouTube channel or visiting his website .  In the interview, Nathan talks about his comedic inspirations, his characters, his own retro gaming collection, and what’s in store for the future.  Nathan is also a member of our forums here on the site, so be sure to shoot him a note to let him know what you think.

Thanks for listening, and as always be sure to drop us a line in the forums or leave a note below!

That Neo-Geo music video was amazing. Mr Barnatt has outdone himself.

I really enjoyed directing this episode of the podcast, and I hope everyone enjoys it!

Haha, that was a great video.

Nice work all. It was fun to get separate interviews with Keith and Nathan. I laughed at the joke about Atari being your quiet, but kinda cool uncle; and the Atari Lynx being that uncle after a crazy drunken bender.

Nathan, I’m glad to hear you are getting some work out of your talent and I’m looking forward to seeing what you come up with next, especially that Keith Apicary mini-movie.

I love this guy! I saw the comic con thing before and had to watch it again. It’s so brilliant.

that video rocks the party

here is the remix man!
http://www.youtube.com/watch?v=ZdqSkG0NLhU

That was great, thanks guys.