Arcade systems in their native form can large and bulky, but once you break out individual parts and re-arrange in a creative way, you can create machines that can be easier to move and share.  A prime example of this is this Sega NAOMI “Ark” from Daniel Gewargis.   You can read about this creation and some of his other arcade and multiplayer creations in this recent interview.

Below, we will cover the actual parts of the NAOMI Ark in case you’re interested in re-creating it yourself or start a similar project. 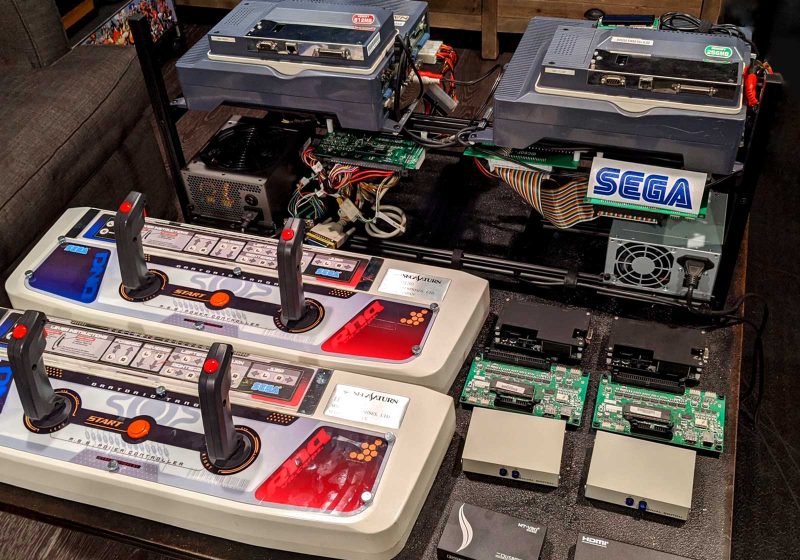 Daniel has fine-tuned a compilation of standard Sega NAOMI hardware pieces along with some off-the-shelf parts and some software solutions, mounted on to a cryptocurrency mining frame to create what he calls the NAOMI Ark. Not only does the NAOMI Ark give him a rather organized “consolized” setup, but it’s also rather portable and is designed to let you swap in different types of controllers. This helps Daniel take the NAOMI Ark to his friends’ homes to share the arcade power and multiplayer fun.   His Ark setup also is design to do multiple player “screens” on a single large flat screen display.

When putting together a NAOMI “home system” or portable setup, you can think of the main Sega NAOMI unit as a bit like a console (that needs some extra parts).

You do need an external power supply and then either have an IO board or OpenJVS to handle items to manage the different types of controller. Then you have the audio/visual output (with the option to split multiple video outputs to a single screen). As a finishing touch, you have the stuff to manage multiplayer. The least straightforward part of the setup is the controls, but we will get to that below.

Below is a run-down of what Daniel used to build his Head-2-Head NAOMI Ark and thoughts on how to replicate it, if you are interested. This setup is to allow a single NAOMI to support 4 players AND 2 NAOMI’s to play head-2-head (Link) games.

Power Supply – Qty 2
Using ATX power supplies that would normally be deployed in a PC but with an adapter that allows me to plug them into the Sega NAOMI hardware.
Shop Amazon for ATX Power Supplies

VGA Cable – Qty 4
You might be able to get away with 3 depending on if your VGA splitter cable can connect directly to the VGA switch box.
Shop Amazon for VGA Cables

JVS Type 1 for Controller Output – Qty 2
You could use Rev B’s as well.
Shop eBay for JVS Type 1

As you can imagine, different arcade games can have wildly different control schemes – whereas most Dreamcast games are played with the standard controller. To accommodate all these control sticks (flying/driving/pedals/buttons/shooting/etc) in the arcade, Sega made a series of I/I boards that all these controls get wired to. Some games require specific boards because they have enough ports/inputs to handle all the buttons. You can read a good summary here.

The boards specifically listed above have pretty broad compatibility with the most common games, but there are some specific games that would need more/different boards to work. In these cases, the Open JVS software is used with a Raspberry Pi to emulate the proper IO board. Open JVS essentially lets you use non-arcade equipment to connect to the NAOMI units. For instance, Daniel uses Xbox360 Wireless Steering wheels for Alien Front, but could also use them for Crazy Taxi, etc.

When Daniel wants to play a game that is going to use a specialized controller that doesn’t use the standard JVS board, he unplugs the original JVS board and play the Pi in its place

Using the Xbox wheels is cheaper, more convenient, portable, and saves space. Also, in some cases, you couldn’t find the original parts even if you wanted to. 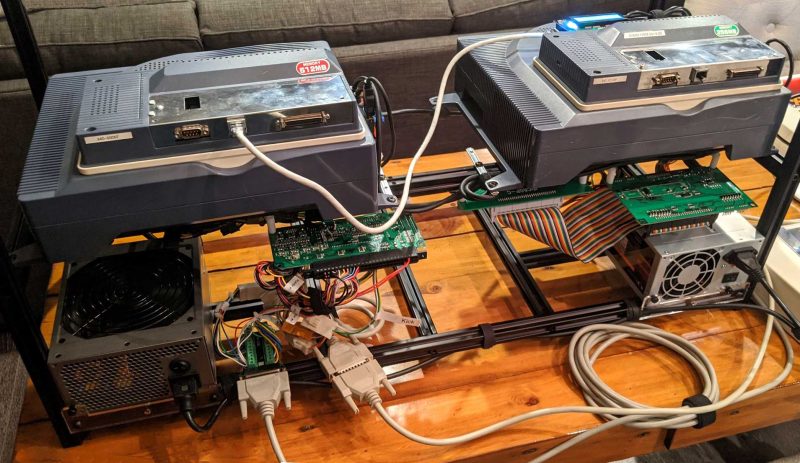