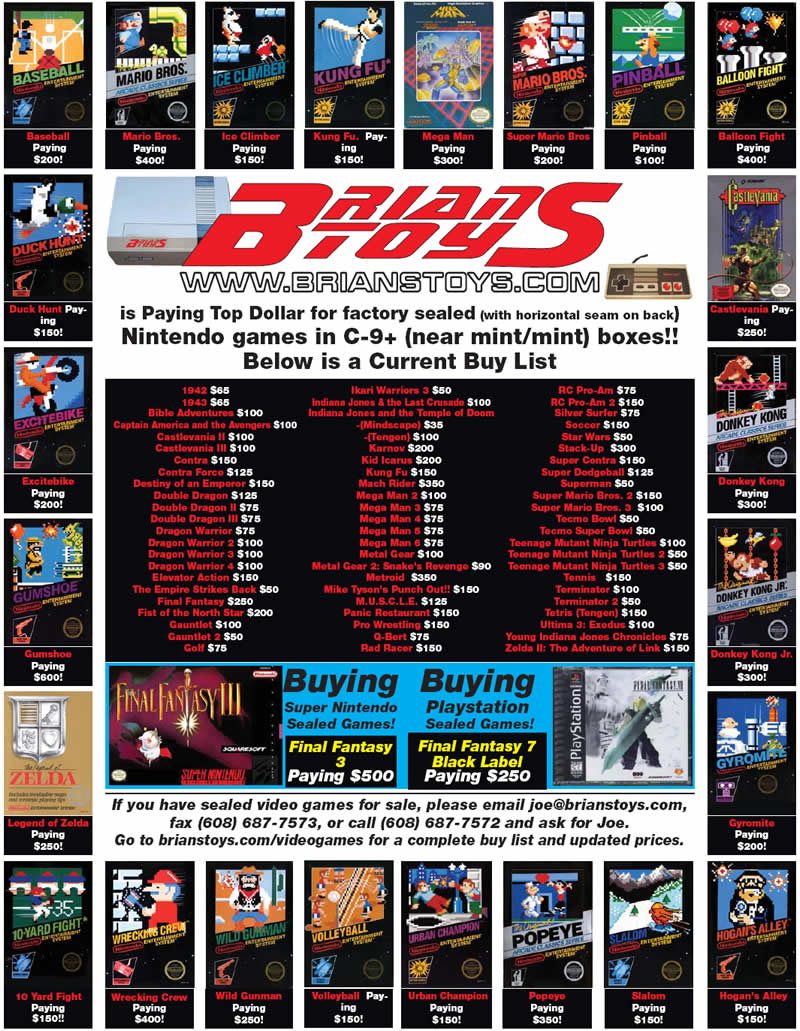 So…. I will admit that this store did have some investing foresight (although I see they no longer sell video games on their website).  The prices actually seem quite tame compared to what we are seeing in our Rare and Valuable NES guide — which now includes a section for Pristine Classics.

Here’s an except from our 2020 lineup of

See more examples on our Rare and Valuable NES guide

it’s possible he’s suffering from a terminal illness and wants to be able to see as many sealed games in his possession as possible before he kicks the bucket. but, i think your idea of hoarding and reselling is a bit more realistic…

I used to work at a video game store and people are not always looking at EBAY for these games. We used to get calls from people willing to pay up to 1,000 dollars for a sealed nes game or a sealed psx game.

not everyone is as computer savvy as we are.

maybe hes a bubble boy and can only played factory sealed games or he will die from the germs of previously played games.

I’m not sure how I feel about hoarding sealed games. As long as it doesn’t affect me, who cares what people do. But if I go into a store to purchased the latest release of some game only to find people in line ahead of me purchasing handfuls of copies to put into boxes and store for years on end as an investment, that just rubs me the wrong way.

It’s sort of like comic book store owners hoarding copies of new release books that they know will have a huge demand so that they can turn around a few months down the road and sell them at much higher prices. I guess since newly released games down really go out of print, it’s not completely the same, but it’s close enough to bother me.

This summer there is a huge collectibles auction. A lot of the items come from Brian’s Toys and they have AFA graded sealed video games. The site that has some info is http://www.premiercollect.com/ and the whole catalog of what is being offered can be downloaded at http://linktracker.brianstoys.com/click.pl?jump=156

Page 41 of the catalog is where the video game section starts. I think the opening bids on a lot of the items are outrageous and wonder how well some stuff will sell.

It seems very much like comics selling for more than guide if they are ‘slabbed’ by the grading authority. Seems silly to me but hopefully it doesn’t drive up prices of loose carts. Btw a used video store near me has a sealed raid2029- i think thats the name, you know, one of those blue games- for eight dollars. Who thinks crap games will be worth a bunch sealed?

He is betting that the prices will keep on rising.

In any case I highly doubt he is going to resell quickly. Unless he knows some people who can’t use the Internet I guess.

But still for business reasons you generally have to sell for 3X what you buy for. So maybe he is just hording for himself.

I think most rare sealed game sales are fraud anyway, it is getting rather rampant.

Yeah, I’ve always wondered about the fraud aspect.
I’m assuming die hard collectors would be able to spot fakes, but I’m not sure if there are tell-tale signs.

He is buying them, most likely, because graded sealed games for atari, NES and SNES are now in the market place and he probably thinks the value will sky rocket.

the VGA is now the grading authority for sealed games:

there are a whole bunch for sale in here. Looks like he might have some affiliation with VGA.

At 4/8/2008 8:18 PM, racketboy said…
Yeah, I’ve always wondered about the fraud aspect.
I’m assuming die hard collectors would be able to spot fakes, but I’m not sure if there are tell-tale signs.

THere are many tell tale signs (faded corners touched up with fine marker, reseals with very slight imperfections etc…). Problem is, if it is graded and in a hard case like that, and the grader missed the ‘tell tale signs’ then you can not open it to examine it for yourself without breaking the graded seal.

Will you please add Donkey Kong 3 to the games

This factory sealed NES “trend” is for those who are short-sighted with money to burn. I’m a child of the 80s – I grew up on the 8-bit NES and i’ll say while it’s nostalgic to see these sealed NES titles. Those prices are friggin RIDICULOUS from a hardcore gaming mindset.

I KNOW for a fact some of those ridiculously priced NES games are technically INFERIOR to the Famicom versions! Take for instance Konami’s CONTRA. The U.S. version was stripped of some detailed animation and cutscenes. From a collectors stand-point – why would I pay more for an inferior NES version ??? Besides, Famicom games usually had the beautiful artwork, colorful carts and instruction manuals. For the price of some of these sealed NES games – I could import several reasonably mint condition Famicom titles from a highly respected Japan video game retailer getting more bang for your buck and collectors value.

Other concerns about these sealed NES games are the battery back-up games like The Legend of Zelda. Its been well over 20+ years for some of them. Do batteries tend to rot overtime??? You don’t intend to open the game to see wether or not game still works or was destoryed by battery rot.

In the end, video games were meant to be opened and played on – not displayed like baseball cards.

Personally, I think people are just getting caught up in the thrill of collecting

Well… just in case there are any readers here who’d like to get into that “thrill of collecting” I’m going to liquidate my collection of legitimate, original NES and 1st-generation GameBoy prototypes so speak up if you are interested. I also have some interesting Nintendo paraphenalia from their CES shows.

Makes me wanna go back and buy all the NES games during its closing days not knowing that people would buy crazy money for this.

I actually bought a sealed game from one of these sellers. Puss N boots pedros great adventure, someone else actually wanted this game also i ended paying 40 for it. its displayed in my room i like the cover. id like to have bubble bobble or a kid icarus metroid but no way im paying a lot for them

I think it’s a little narrowminded that people can’t conceive that sealed games (or any “vintage” game for that matter) *could* one day become valuable. At one time Honus Wagnar, Babe Ruth, Mickey Mantle cards were all *worthless*. Comic books were meant to be read, then tossed out or traded to friends like any other magazine. Toys were meant to be opened and played with, not boxed up. So no collectibles aren’t supposed to be practical. They’re meant to represent the “rarest” form of this collectible, and opened copies far, FAR outnumber the unopened copies. And as the “children” of the 80’s get more disposable income the sales of vintage games are *probably* going to go up (at least if you use a 20 year tread, titles like super mario bors and zelda have gone up ~8% a year).

BTW I checked his site, he’s offering *more* for all the games he listed in this original post (year 1/2 ago) so I guess he’s making coin on his financial model.

I have several super nintendo books for games… Can I sell super game boy, boxing legends of rings,ncaa basketball,stunt race,stanley cup,art of fighting.. Just cleaning and came across didn’t know if worth anything or just trash…

Whats crazy is that this seller is on amazon, and he is selling lots of the nes games at ridiculous prices because after supposely grading the games, now the prices are jacked up, but i guess if you have years looking for a sealed game and cant find it, you sure know this guy might have it, but are you willing to pay that much?

Who wants a sealed and graded cart? You can’t really play it, can you? 😉

BTW, nice site! I’ve been reading it all night.

its a nobrainer that these games will be valuable, probaly trying to corner the market, i would definaly not pay big money for the sealed ones for i suspect it would be easy to fake them, but even loose rare carts have risen in value on ebay considerably,

I just went to the guy’s website and apparently the guy resells the games after they’ve been graded at incredible (high) prices. Nothing costs less than $75.

Interesting…. thanks for the update.
It doesn’t surprise me though. Be surprising how many people actually but them.
Kinda sad.