Tiny bagels and pots of hot coffee wait patiently on a fold-out table in a a small classroom on the southeast end of New York University campus. It’s an early Saturday morning in late June and most of NYU’s students are on Summer break. But for the group of artists, programmers, hackers and musicians about to gather around that breakfast table, the most important class of the year is about to begin.

Using a couple of open-source tools, a bit of programming know-how and a fair helping of imagination, the participants of this 2-day workshop are about to do something wonderful – They’re going to lay the foundations for their own 8-bit NES games, and become the next generation of retro game designers.

With breakfast and beverages depleted, the group makes their way into a technology lab down the hall. They’re walking into a computer science course, but not the kind that any university would normally offer. The instructor steps forward and passes around a knock-off NES console clone from China, the same kind that you usually see on display in mall kiosks and dollar stores. There’s something special about this one though – It costs only $10, and is distributed as a learning computer to low-income families in developing countries around the world. There’s only one problem: It needs software.

Since 2009, the Playpower organization has been developing their unique learning games platform to benefit children in developing nations. There’s no big budget or R&D department because everything has already been laid bare by the original Nintendo Entertainment System. There’s no manufacturing costs either – These 8-bit ‘Famiclone’ systems are already being mass-produced by dozens of Chinese manufacturers. What the project does need, however, is volunteers, and that’s exactly where the workshop’s 20 or so talented participants come in.

After a brief introduction, instructor Don Miller, who is known for performing live visuals with the NES under the alias NO CARRIER shows volunteers the basics of working within the system’s graphical limitations. Miller has been tinkering with 8-bit hardware for years, creating several pieces of open-source software that have made ROM-hacking and homebrew on the NES more accessible than ever before. But even with this extra software muscle, making graphics on the NES remains a somewhat intimidating task that requires an intimate understanding of how the system processes and displays images.

Some of the workshop’s attendees were familiar with the NES and had an idea of what to expect. Others weren’t versed in 8-bit aesthetics at all and were more or less starting from scratch. But when it came time to get their hands dirty, all of the volunteers seemed to find designing sprites with a palette that only holds up to 3 colors to be not just challenging, but exciting. Miller went through the basics of how the NES stores sprites, colors and backgrounds by having everyone open a small repository of ROMs inside YY-CHR and GalleryNES, software that reveals and makes editable the content of a game’s graphical data. Soon enough, everyone was modifying the sprite data inside Bomberman and Super Mario Bros, the first step towards creating visuals for the next generation of 8-bit games. 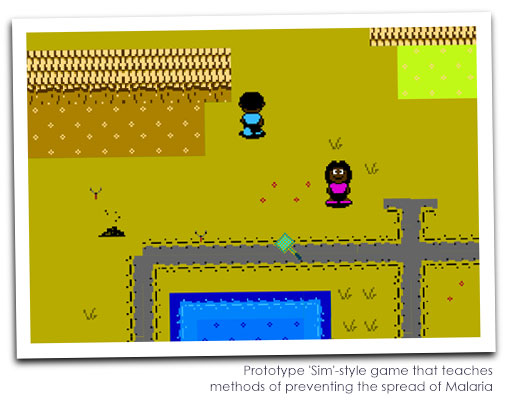 Of course, it’s important to remember the higher purpose these games will serve, and Playpower co-founder Derek Lomas is on hand to provide some background information. The Powerpoint slides show living conditions of children in impoverished areas of India, a region where Playpower has been especially active. Derelict buildings and dirty hovels house youngsters born into lower-class working families. Lomas stresses that when it comes to creating learning software for these children, quality and context are extremely important; factors that are usually not represented at all in the low-quality shovelware titles that are typically bundled with many of the aforementioned low-cost gaming systems.

During their previous workshops, Playpower had already gotten started on some of its own learning titles that are culturally appropriate, effective and fun. One of the prototypes demonstrated was an 8-bit typing game similar to the Dreamcast cult hit, Typing of the Dead, featuring Hanuman, a popular figure from Hindu mythology. Another was a top-down ‘Sim’-style game aimed at teaching methods of preventing the spread of malaria. Playpower volunteers have already traveled to Brazil and India to not only spread these and other learning games, but to confirm that they’re actually effective through on-site field testing. 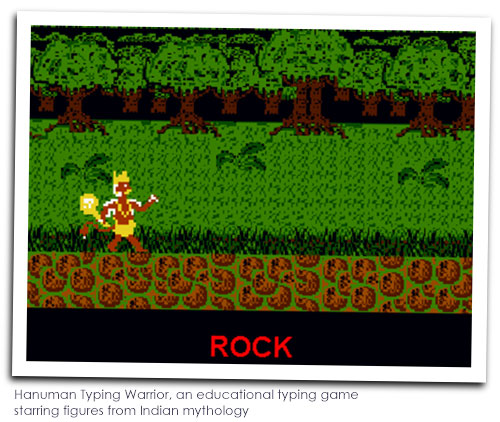 By the end of the workshop’s first day, the volunteers are divided into small teams and already pitching game ideas to the rest of the group. They decide which project they’d like to work on and with that, everyone retires for the evening, goals firmly in mind for the workshop’s second half.

The second day kicks off on the lower level NYU’s Tisch Hall and everyone — including the instructors — seems to be running a bit behind schedule this time. Nevertheless, the breakfast ritual proceeds at an unrushed pace, with some new faces gathering around the table full of bagels, spreads and hot beverages. Namely, Joey Mariano, aka Animal Style, a Philadelphia-based chiptune musician with an extensive portfolio of musical hardware hacks, and NYU’s own Jeremiah “Nullsleep” Johnson, an original member of New York chiptune artist collective 8bitpeoples whose 10 years of lo-fi musical exploits have taken him to Europe, Japan and everywhere in between. It was safe to assume that today the participants would be getting a crash course in chip music. 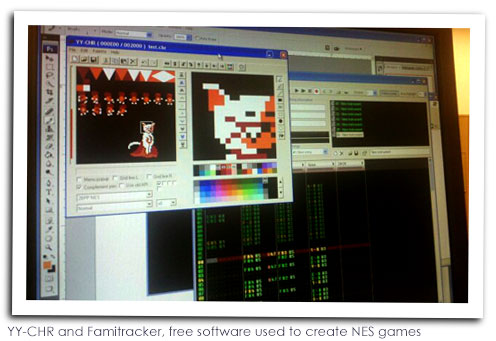 The chiptune elites begin a tag team demonstration of Famitracker, the software composer that writes in Nintendo Sound Format (NSF) for eventual playback on an actual Nintendo console. Being a ‘tracker’ program, much like the ones developed for early home computer systems like the Commodore 64, Famitracker’s method of composition is more akin to programming code than placing notes on a staff. Fortunately, in a classroom room filled with programmers, the learning curve isn’t as steep as it would normally be, and a few are able to whip together some short, whimsical tunes.

Don Miller takes the podium again to demonstrate what is probably the most intimidating facet of 8-bit game-making: Programming the game itself. This means getting down and dirty with the NES’s assembly language, a notoriously fickle programming architecture. But Don kept it simple, identifying the code responsible for sprite animation cycles and explaining how to program the color palette data by changing hexidecimal markup and compiling the changes back into the ROM. There was a lot more to it, but for an introductory workshop, it was just enough to keep everyone interested and eager to experiment on their own.

With just a few hours to go, the room splits back into groups and springs into action with the goal of creating as many assets as possible for their game ideas from the day before. They would also write documents so that they or other Playpower volunteers could continue developing their ideas. 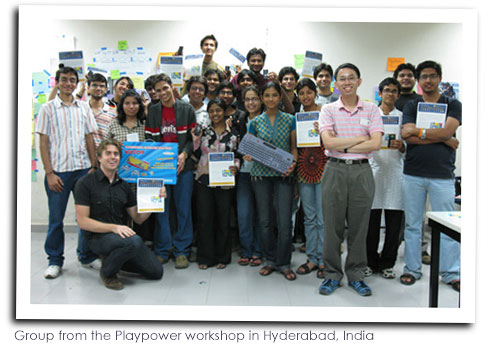 Progress Made At NYU Sessions

Given the time constraints, there were some impressive results by day’s end. One group made advancements to the Sim-style Malaria prevention game mentioned earlier by giving the player control over a character on the screen to avoid confusion. Another wrote a detailed design document for a game where you program the actions of a robot to complete puzzles, sort of like an 8-bit version of Carnage Heart for the PS1. And one group even managed to put their assets into a functioning prototype – a mathematics game starring a number-munching shark.

So what does this all mean for retro gaming enthusiasts? If I were to speak prophetically, I’d say that the continued success of workshops like this one signals the beginnings of an 8-bit game design rennaissance. Playpower isn’t just working to benefit an important humanitarian cause – they’re re-invigorating our interest in the craft of retro games, putting the right tools into the hands of those with creativity and a passion for classic gaming. In other words, if you’re all about neo-8bit games like Sivak’s Battle Kid, there’s a good chance that, very soon, you’ll not only be playing more things like it – you’ll be making them too.

If you are facinated by this topic and maybe even want to get involved in the project, here are a handful of links that will get you familiar with the project and what you need to get started.

Wow! Great Article Zen. This is something going on in the retro-gaming world that I knew nothing about before today.

Your writeup is informative and exciting; however, there is an “elephant in the room”. We all played educational games when we were young, and I can say without hyperbole that the vast majority were so boring no child could enjoy them (with the notable exception of Oregon Trail). How is this new generation of programmers addressing the age-old problem of making a video game that’s educational AND fun?

Still, great article. I’d like to hear more on this topic in future posts.

I had some good games growing up — Carmen Sandiego, Math Blasters, etc, so I think it can vary. On the plus, side you have some experienced games wroking on this project and decades of gaming progres to learn from. So lots of potential if you ask me…

That’s pretty awesome. Besides ‘edutainment’, 8-bit platforms are one of the greatest ways to learn about computing. It’s a shame that the greatest 8-bit gaming platform really has no facility for BASIC. It’s really pretty hard to get into programming the NES. Getting these kids a C64 clone, instead of a famiclone would make the computing side of things so much more accessible.

Hatta, you’d be happy to know that every keyboard famiclone comes with built in BASIC programming.

Check it out! We need BASIC game designers, too.

did someone say BASIC programming?

I’ll have to see if this orders to Europe

would be very, very interesting to start programming for this one

however, does one need to buy carts on the side?

truly pleases me to see that not only is 8-bit still on the move, but it’s actually doing good stuff for less fortunate

oh great, so the prices of retro computers will now go up. thanks to them all wanting c64s in India!

mitch, these are all newly-manufactured machines. If anything, more demand would just lower the prices while keeping the prices of your retro machines down.

This is a really cool idea. It’s things like this that make me especially proud to be a gamer.

I wrote on this myself earlier today, and it was a pleasure to read your opinion on it racketboy.

A little late to respond as I was traveling—thanks for the great write-up Zen! I’m sorry to have missed out on our event, but glad you captured it with such detail. Nice work!

What an amazing and inventive initiative.