One of the most popular features of this site is our Rare and Valuable Game Guides.  These features have received a lot of attention lately because of the recent sale of a Stadium Events NES Cartridge on eBay for $13,000 and a sealed listing of the same game on eBay for more than $20,000 (auction is still active).

Because of this recent traffic, we have received a lot of emails and blog comments asking how much their old games are worth.   Instead of trying to answer each and every request, I’m going to put together a quick little guide to determining the value of your classic video games.    If this post seems like basic knowledge to you, I apologize, but I hope this will be beneficial to a number of visitors.

This may seem like a simple concept, but many people don’t realize this little fact.  When collectors get wrapped up in scarity and popularity, it’s easy to start spitting out values of what they think something is worth.   But in reality, unless somebody actually pays that amount, the quoted value is just an opinion.   Examples of this can be found on eBay on a regular basis.   A current example is this complete copy of the NES Myraid 6-in-1 — the cartridge is usually sold for $700 to $3,000, but this seller is hoping to get an asking price of $12,000 on eBay.

Why eBay Is The Best Price Guide

Since the best way to define the value of something is to see how much somebody actually paid for it, we need to find a way to see what games are actually selling for.   It just so happens that the world’s largest public marketplace, eBay also lets you see what items have actually sold for in the last 30 days (we’ll get to that part in a sec).   What’s even nicer is the auction format (what most sellers use for pawning off their goods) is especially good for pinpointing what people were actually willing to pay for the item.  (The Buy-It-Now format works too, but the seller establishes the price when the seller could have, theoretically, been willing to pay even more).

How To Find What People Paid For Items on eBay

Now, let’s take a look at how to find out how much certain items sold for during the last 30 days on eBay.   (An eBay account will be required for this, so if you don’t have one, sign up now) 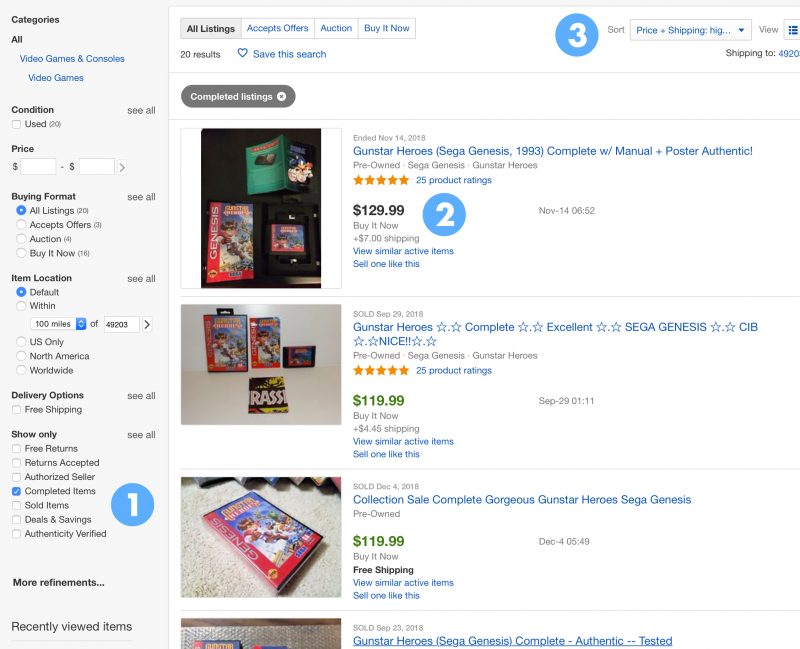 If the price is in the completed auctions listing is in red, that means that the item did not receive any bids and did not sell (it was probably priced too high).  Of course, that also means that the items with prices in green actually did sell. (see image item 2)

Once you have the completed auction results in front of you, you can sort the results by price (by selecting “Price + Shipping: Highest First” from the sort drop-down box).  (see image item 3) Once the items are sorted, you can more easily see the average selling prices group together in the middle. (you could also add up each up the values and divide by the number of the items to get an exact average).  (This is the method I use for I use for both the Cheapest Games and Rare & Valuable Series).

Condition of the Game Can Make A Big Difference

If you’re trying to figure out how much your game is worth, you really need to pay attention to the condition it is in.

If you would like to see how much of a difference the condition of game makes in value for the most popular consoles history has to offer, take a look at this analysis I did on my article entitled, Comparing Massive Markups For Pristine Retro Games.

As you can see from that article, some newer games like those for the Dreamcast or Playstation will almost always come with cases, but every now and then somebody lists some disc-only games at a discount.  Some systems like the Saturn and Sega CD came in fragile cases that are now becoming a rarity, so those disc-only games should be relatively easy to find.

Values Between Regions Can Also Vary

While in most cases, the values between the different regions of games can be quite similar, sometimes the print runs can vary if different regions, resulting in quite a difference in values.  Here are some examples…

Still Unsure of Your Game’s Value?

If you have read through this guide and still don’t have a good idea of how much your game is worth, the Racketboy community might still be able to help.
Ask any tough questions in our Dedicated “What Is This Game Worth?” Thread

Good Guide. I use E-bay, and Amazon as price guides then most of time find a lot cheaper at Swap Meets, Goodwill and even Gamestop. Example Gamestop Gamecube Phantasy Star = $4.99. Amazon Phantasy Star peaked at $184.99 currently $143.00.

This site is sometime helpful on price guesstimations:

Yeah, VGPC is good for quick lookups for most games, but I still think a manual lookup on eBay can get a more accurate indication — especially when you’re concerned with complete vs sealed vs loose games. VGPC also doesn’t cover some more obscure stuff.

Over the years, I’ve talked with JJ (the owner of VGPC) about some of these thoughts in addition to the fact that I think using Amazon and Half.com hurts the accuracy of the prices as they are usually a bit higher and there isn’t an accurate way of telling what actually sold at a given price like there is on eBay.

Thanks for the article! I hope people stop overcharging for games in my area, that’s why I almost always buy online

True about Amazon, Half. com and E-Bay direct buy store. I also have seen their prices higher than the regular E-Bay auctions, Craigs List and definitely those Swap meets and Goodwill. A lot of disparity depending where you buy. If a collector wants it, they will pay a crazy price. Sometimes hard to say what a game is actually worth, E-Bay does paint a current market picture. E-Bay is great for finding those rare items but they have increased the prices through buyer frenzy. A sacrifice one takes to get that elusive game.

“If the price is in the completed auctions listing is in red, that means that the item did not receive any bids and did not sell (it was probably was priced too high). Of course, that also means that the items with prices in green actually did sell. (see image item 2)”

Fixed. Thanks for proofing 🙂

Well, see my arguments above…

“If this post seems like basic knowledge to you, I applogize, but I hope this will be beneficial to a number of visitors.”

applogize should be apologize

“While in most cases, the values between the different regions of games can be quite similar, sometimes the print runs can vary if different regions, resuting in quite a difference in values. ”

“Ask any tough questions in our Decicated “What Is This Game Worth?” Thread”

Decicated should be dedicated.

lol — now that you mention it, I forgot to even run spell-check on this. That’s what I get for typing this up on the fly while under cold medications.

I am so glad somebody agrees with me 100% on how game prices should be determined. If only video game stores and other web sites followed you example.

Getting back to E-bay, I’d have to say a lot of sellers are getting bogus pricing information from somewhere, and it’s a big problem for video game collectors.

A good example is “Columns iii” for the Sega Genesis. A search of completed listings reveals the game only sells (complete) for between $7 and $12 (including shipping). However, do a search for current listings, and you’ll find five Buy It Now listings with the following prices: $15, $17, $18, $24, and $25. If you track those listings, they will go unsold, then the seller will relist them for the same price. They are conviced of the value because of something they are reading somewhere. Perhaps they are just looking at the other unsold “Buy it Now” prices and thinking those prices they reflect the value.

The same kind of search results can be found with just about any game. It points to one giant problem: E-bay is flooded with unsellable, high-priced games, games that are not in the hands of people who want them.

hopefully this will end threads that are unneeded 🙂

How much is the PAL version of Stadium Events roughly worth? and $41000 for a game is ridiculous!

The PAL version has been going from anywhere to a few hundred $s to a few thousand depending on the condition. But part of me wonders if people are getting it confused with the US version…

Hi Racketboy, i’ve been trying to find price for the NES
Cosmic Spacehead, company Codemasters catridge is black.
I’ve checked many sites and the game never seems to come up this would have to be rare then? If you could please help me find a site that has this game listed or know it’s value would be really appreciated thanks george.

Youre cosmic Spacehead is worth at most 8.00

What’s up guys. Question, I would like to know what you guys think the FIRST Twisted Metal game for the PlayStaion (Long Box Version) would be worth Brand New Factory Sealed? I see the greatest hits version in the small jewel case go for 70$-175$, so I would imagine, the original black copy in the long box would be more. Any help would do, thanks!