The Nintendo Revoltion controller has already created a great deal of discussion about the new door of gameplay that the system will open — much like the Nintendo DS did for portable gaming.

Not only are gamers anticipating what is in the Revolution’s future in terms of games, but developers are also warping their brains over the possibilities that the Revolution controller brings them.

Even though there are probably many game genres that will either be created or enhanced by the Revolution controller, the classic arcade light gun shooter genre may see a real revival with only a minimum amount of effort from developers. (See my list of the best Light Gun games)

I previously played around with the ideas of Sega’s arcade-to-Revolution’s possibilities, but after reading the latest issue of EGM, these thoughts were rekindled.

At the end of the interview with Sega’s Hiroshi Kataaka that was primarily about the upcoming Virtua Fighter 5, EGM got him to share his thoughts on the Revolution controller… (on Electronic Gaming Monthly April 2006, pg 52)

EGM: “The Nintendo Revolution has a unique controller, unlike anything we’ve seen before. What do you think of it? Have you given any thought to to making arcade games based on similar technology and then porting them to that platform?” 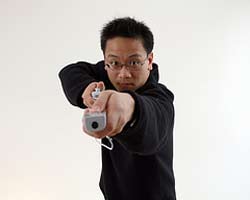 HK: “Arcade games always use the peripheral that best suits the game. The Revolution controller is currently an interesting new option we now have availible. If the controller suits a particular game concept we have, we might just use it for an arcade title.

As for console ports, in recent times it has become more difficult to do home conversions of light-gun games due to the wide variety of TVs in use by consumers. While the arcade games use specialized, high-resolution screens, you don’t have that type of standardization in the consumer market. So I’m personally hoping the Revolution controller will allow us to do more ports of our gun games [neither Virtua Cop 3 or House of the Dead 4 has received a console port yet]”

Of course, all the details about how the Revolution controller functions is not all out in the open yet. (See some discussion at Ars Technica), but from what we have seen and heard, it should allow gamers to have a more reliable option than previous light guns. (See how light guns work)

Instead of having cruddy and unreliable third-party light guns (most of which won’t work on many High-Definition TVs) that only cause frustration, gamers will be able to have a high-quality, Nintendo-built controller that may not have the same dependancies and weaknesses that light guns have.

We can already see demonstrations of these abilities after the recent screenshots and player demostration pictures from the upcoming Revolution game, Red Steel that were featured in the latest issue of Game Informer. Red Steel seems to combine elements from both light-gun shooters and your newer first-person shooters.

From my understanding, a Revolution port of light gun shooters like House of the Dead, Virtua Cop, Time Crisis, and many more would be an easy task. Check out my new run-down of gun games — both old and new — that could be prime candidates for future compilations or game downloads.

Additional comments: Before anybody complains about how light-gun games are outdated now that we have full 3D FPSs like Half-Life and Halo, you need to remember that Light-Gun shooters still offer a diffenrent gaming experience — one that is more accessible for new gamers and is good for a quick pick-up-and-play game. It’s like saying we shouldn’t have games like Crazy Taxi and Burnout because we have Gran Turismo and Project Gotham Racing.