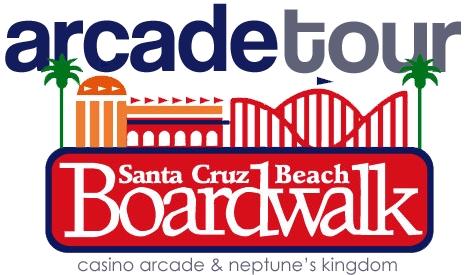 As we all know, arcades are disappearing around the world – even in the largest of cities.    I know that here in the Midwest part of the US, there are only a handful of quality arcades and not many “mega arcades” .  Since I was making a trip out to California to visit my brother, I wanted to make a special detour to Santa Cruz to revisit the one massive arcade that made the biggest impression on me in the last ten years.

The Santa Cruz Boardwalk is a beautiful location to spend a sunny day.  The beach-side location is mostly known for the amusement rides, but it is also home to one of the largest remaining arcades in the US.   The arcade has been around for decades and has built up a well-rounded collection of games over the years.  Of course, some of the machines have become casualties of disrepair and retired, but there is a strong lineup of vintage titles that have been well-maintained by the Boardwalk’s five-person, on-location repair staff.   (Not every machine is perfect, but they were all playable)

I visited Santa Cruz late Fall on a couple of weekdays, so it was one of their slowest times of the year (the Boardwalk rides were only running during the weekends) and the arcade wasn’t especially busy.  I visited previously back in the summer of 2004 and it was quite lively.  I remember actually having to wait in lines to play the newest games.  That year one of the big ones was King of Fighters NeoWave and there was always a small swarm around that machine.  I saw that the machine was still there – the color on the monitor was off, but it was still quite playable (and no lines six years later).   Needless to say, it’s quite a thrill to visit a thriving arcade these days.   I’m not sure if the arcade is quite as vibrant in its peak times (any locals here to verify?), but considering they are still investing in new machines and have a solid staff, it seems to still be doing well.

There are actually two buildings at the Santa Cruz Boardwalk that have arcade video game machines.  The primary arcade is the Casino Arcade, but there is also Neptune’s Kingdom, which is primarily a mini golf area, but has an arcade area inside to the side (the Smuggler’s Arcade) and an area upstairs with more machines and pool tables.  (I also saw the area labeled “Cannonball Arcade” was closed off, but it mostly looked like skeeball and other redemption games)
I thought the game selection was pretty strong in both arcades.  The genres that were probably most strongly-represented were light gun shooters, fighters, music, and racing games in addition to a big handful of 80s mainstays in the retro corners.

In order to stay financially strong, the arcade has boosted its selection of redemption games (the ones that spit of tickets for prizes).  I know most of us here don’t really care for those, but I’m told that’s what most people look for now in an arcade.  [sigh]   But I would guess that the redemption games still only account for 20 to 30 percent of the floor space in the Casino Arcade.

The staff at the Santa Cruz Boardwalk was nice enough to set up some discussion time with me – including a bit of an interview with the lead technician, Brian.  After warming up to the video camera, Brian shared some great insights into running a large arcade and shared some of his memories.  I’m sure he had many other great stories to share and, perhaps we will be able to touch base with him again in the future (maybe as a podcast guest?)

Based on both of my visits to the Santa Cruz Boardwalk, I can strongly recommend stopping by if you are ever in Central California.   I recommend going in the peak season as the area is livelier and the Boardwalk rides will be up and running so you can make a full day of it.

If you have visited the Santa Cruz arcade any time in the past, I look forward to hearing your experiences in the comments!

Great article man, I’m glad it all worked out with the interview! You got some great pictures too, puts the Boardwalk’s own PR people to shame.

If you ever get a chance, try coming out in the summer and check it out again – it gets incredibly busy, and it really is great to see an arcade being used to its full potential.

wow, that is one great arcade cab inventory! love the article and the videos. i’ll definitely check this place out if i’m ever in the area or maybe possibly for the Bay Area meet up someday.

I’ve been there in the summer of 1992, I was twelve at that time and it was one of the best experiences in my young life. I’m from the Netherlands and arcades were never a big thing overhere, so for me these arcades were something out of another world. We stayed in Santa Cruz for a full week and you can bet that I was dropping quarters like a madman 🙂

Former Boardwalk employee here. What an awesome trip down memory lane!
I worked there for a couple summers in the late 90’s, selling ride tickets rather than working the arcades, and it was plenty busy then, although it seems just as busy now as it was. The Boardwalk is a big draw in the area, and the arcades (there is actually yet another arcade that is on the other side of the Boardwalk, but it’s closed unless they’re completely open). I spent many a lunch break in front of the Metal Slug (the first one), and Time Crisis cabinets.

This is a place with a lot of history and we’re lucky that it has persisted through the decades when other beachfront amusement parks and most arcade have closed up shop. It’s well worth a visit for any enthusiast who finds themselves in the Bay Area.

Very nice interview! It’s great to hear about such first-hand experience. Too bad it’s on the other side of the planet, looks like a great arcade. And I spy Pump it Up too!

I haven’t been to Santa Cruz in a few years now, but I used to go all the time. it looks like they’ve added quite a few games since the last time I was there. I really liked this post, great work!
You know if you go down that street (down past the rides) you can visit the bridge all the kids hang off of in The Lost Boys 🙂

I lived in Santa Cruz from 1991-1992 and I went to the boardwalk all the time… there wasn’t much else to do! The one thing missing from the youtube clip is pinball. They had a good selection of pinball back in the 90’s and that would be a big draw for me now.

During the last half of elementry school and while going to college I lived about 5 minutes away from the boardwalk (though in different locations).

As an adult (I moved away from there less than a year ago), I didn’t really care for it. Why? A lot of the games are either huge rides where you pay about $1 to play for 5 minutes, or probably some fighting game with a broken stick. Maybe they recently started actually fixing their games, but probably you just got lucky.

Had they kept their cabinets up better, I would’ve spent more time there.

But as a child, I went there very very often. In this arcade, I learned to master Strider on one credit. Between the boardwalk main arcade and the bowling alley across the street (20 years ago, the surf bowl only had a few but actually really good games) I also learned to master Heavy Barrel on one credit as well.

Even in its prime, the boardwalk’s arcades didn’t really have a good variety of games. It always had the latest version of Street Fighter 2… but it never even some pretty popular games such as Shinobi.

Though there were a few obscure gems. The main arcade used to have Tiger Road (I currently have a copy in my own arcade), the original 3 monitor Darius, and in a small arcade that was only open on the weekends and during the summer, they had Kury Kinton.